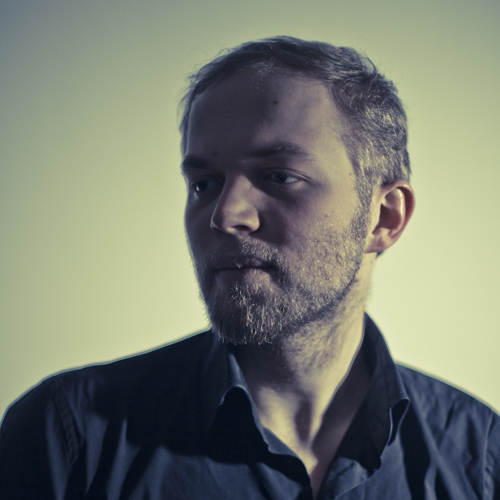 From the album’s artwork I get the feeling that it invites the listener to explore the surface of a very fragile territory, a glass-like volcano. What does Serza mean?
“serza” is actually the russian word for heart, but with a slightly wrong spelling. correct would be “serzo”, but with the “a” instead of the “o” it sounds and looks better. during the long time i worked on “serza” many things changed for me – relationships, habits, or even my taste in music, and like the symbol of the human organ, “serza” holds all these differences together and at the same time it is a synonym for warmth and intimacy, so this was perfect for me. maybe the cover suggests something different, but i don’t care, i just really liked the picture.

In an email conversation we had, you told me that it took you almost 6 years to complete Serza. Listening to the album however didn’t reveal any incoherence in the sound, structure and texture of the different tracks. How did you manage to maintain the album’s consistency?
if i remember well, the draft for the second song of the album, “bows and airplanes”, should even be 8 years old, which is quite funny because at that time i was just making music for a bit more than two years. anyway, in the beginning the album sounded quite incoherent, and it took me a lot of time to mix and add plenty of new stuff to make it sound as homogenous as it does now.

Your sound is blending organic instrumentation with digital sound sculpting in a meaningful way without distorting a song’s structure. How do you achieve that?
it just happens, it has always been very natural for me to combine digital sounds with real instruments, that’s how i like it and want it, and i always liked when real instruments sounded like real instruments in the context of ambient/electronic music. you will almost never find a cello, acoustic guitar, drums or any other real instrument that sounds much processed in my music.

In certain tracks you seem to experiment with brief pauses or the change of dynamics from (almost) silence to the opposite state. How important is silence in your compositions?
very important, i think it makes the music more interesting and meaningful. diversity is the key – take life, it is full of diversity, and i like my music to be as real and natural as possible, even if – or especially because it is “electronic music”.

When and why did you start writing and releasing music?
that’s quite an uncommon story, i was not really interested in music until the age of 18. it was then when i bought my first cd and got totally addicted to music. two years later i bought my first musical instrument – a bass guitar for 40 bucks and started the band tupolev with my long-time friend peter holy. that was ten years ago. from this point on music was not just a hobby for me – it was like with all important things in life – it became a passion. releasing music was just a logical next step.

Is “Serza” a turning point in your career to date?
i guess so, but it is hard to describe why. it is more a personal thing and has nothing to do with any kind of external influences. probably i am just happy that i finished it. 🙂

How do you envision your future musical endeavours?
the main aim is definitely a new solo album, but this time i hope to be able to do it much faster and i want it to be more distinct from common ambient/electronic styles, i think i am ready to do something really special this time. i do have some kind of idea for this already, but i am still not sure if it will work out. so it’s not the time to announce anything concrete, but i think many people will be surprised.

You have been involved in many collaborative projects. What are the main characteristics of these projects? Does your involvement in these influence your personal work or do you tend to separate it?
there are two important projects that definitely had a significant influence. first of all tupolev, where i learned a lot about rhythm, tonal diversity, but most of all how to do music in general. the second big influence was port-royal, which taught me a lot about melody, synths and electronic music. not long ago a very good friend said that “serza” sounds to him like a mix between (earlier material of) my solo project, tupolev and port-royal and i think i can basically agree with that.

Can you tell us a bit about your recent release with Quarz?
it’s a collaboration project with friends from all over the world. the first album “five years on cold asphalt” was released in september 2012 on the portuguese label cronica and features nicolas bernier, stefan nemeth (ex-radian, lokai), alexander schubert and martin siewert (radian/trapist). a second album is already in the works, this time with philippe petit and steven hess (locrian, pan-american) and more guests that will soon be announced. it’s big fun and a very nice experience to work with all these amazing artists, but of course it always takes a lot of time to finish each album as everybody is very busy. but that’s not a problem for me. good things just need time!

“Serza” marks Valeot’s 15th release to date. How did the idea to create Valeot occur?
it was quite a rational decision. we were looking for a label for the first tupolev album, but without success. so peter and me started valeot early in 2008. we both always had the idea to start a record label at some point, so we just did it earlier than we thought we would. anyway, it was definitely a good choice.

Valeot’s roaster includes a variety of styles ranging from post-rock infused acts (The Pattern Theory, Tupolev, Milhaven), experimental singer/songwriter projects (Werner Kitzmüller), soundscape driven releases (Novellino’s “Through Glass” or Kutin’s “Ivory”) and projects fusing elements of glitch electronics with nuances of jazz and post-rock (Vatagin’s “Serza”) etc. How do you select the materials you release and how can someone have their music released on your label?
the only rule is that both of us (peter and me) like the music: we always decide together, and the fact that we are both quite open minded listeners reflects upon the diversity of music styles on our label. how to get on our label? you should like (at least some of) the music we release, and we should like your music – easy as that.

Any upcoming personal or collaborative projects planned?
beside the projects i already mentioned before, a new port-royal album is in progress. i played cello on some really nice upcoming releases from people like gurun gurun (home normal), dalot (n5md), nicolas bernier and attilio novellino (valeot). there are also some long time unfinished albums like a kind of jazz/postrock quartet, an album with werner kitzmüller and an album with fabian pollack. additionally i’m already making plans for a third quarz album and one guest is already fixed – the legendary berlin techno producer (as ilsa gold) and experimental artist pure (mego, cronica).

Do you have any performances coming up?
in april i presented “serza” in vienna, for this occasion i played live with martin siewert (radian/trapist) on guitar and david schweighart (tupolev) on drums. it was a blast, a very intense and enthusiastic show with really great feedback afterwards. the basic idea was having an almost classical rock trio playing ambient songs, and as it worked out that well we will probably do some more concerts in this combination, maybe during some festivals later this year. and there will definitely be some real solo performances as well, just me with cello & laptop. a tour through europe should take place in autumn this year.

Be sure to read Headphone Commute review of Serza