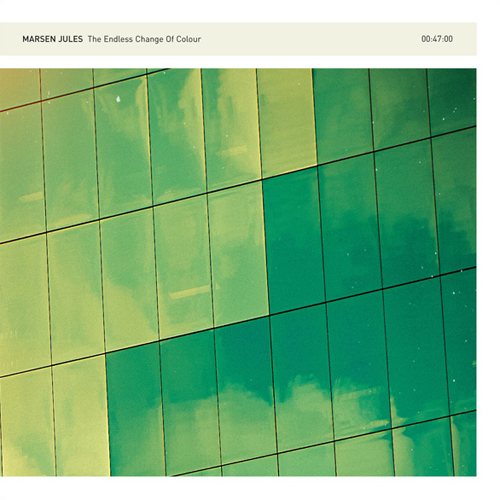 Marsen Jules is probably the best known alias of Martin Juhls from Dortmund, Germany, also operating as Falter, krill.minima (don’t forget to check his recent Sekundenschlaf out on Psychonavigation), or the marvelously named Wildach Sonnerkraut. His different aliases allow him to experiment and expand in different directions. The previous (six) releases as Marsen Jules each feature somewhat different instrumentation but all share Juhls’ personal trademark of intricate sound design.

Most tracks on the previous Marsen Jules albums are somewhere around the four to six minutes in length each. But his latest album, The Endless Change of Colour, released on Taylor Deupree’s 12k, is different in this respect: it only features one single uninterrupted composition. The Endless Change of Colour is a perfectly fitting title for this generative composition, created by the kind of systematic rules known from the ambient works of Brian Eno.

The sounds are created from a “single phrase of an old jazz record split into three audio streams. These streams are transformed into loops which break the original instrumentation down into sound resembling pure waves, harmonics and overtones. These loops play to different time signatures to create phasing patterns that continuously move and dance around each other in a constantly-evolving lattice of sound. Despite it being based on a very strict and limited set of rules the music could, in theory, be endless and ever-changing”.

The concept of creating endlessly changing music, and the reference to Brian Eno’s work may be an indication of what you may expect, but on the other hand the sound spectrum presented is clearly that of Marsen Jules himself. Learning the source of his sample, you’d probably expect some of the pops, crackles, clicks and ticks that are so very popular in contemporary electronic music. But, avoiding the obvious, Juhls created a sound that is completely clear, without any distortion. A sound that feels like a comfortable, uninterrupted dream.

“Electronic tones hum with warmth and the softness of slumber. The patterns are there, familiar to our modern ears, but they’re not always what they seem.”

Review by Peter van Cooten of Ambient Blog.
Republished on Headphone Commute with permission of the author.