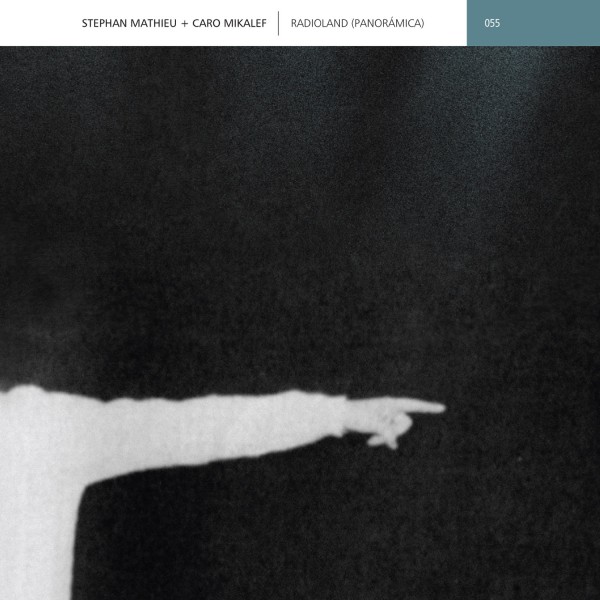 At first I thought that the latest release by Stephan Mathieu in collaboration with Caro Mikalef was simply a live rendition of his previously published (and critically acclaimed) album Radioland in 2008 by Die Schachtel. Indeed there is a relationship between these two releases. The original piece has been commissioned by Wili Peloche and Martín Borini for Panorámica, an Argentinian festival that took place in Buenos Aires on March 11th, 2011. The composition started off as an audiovisual installation, originally intended to be a conceptual piece for a space with four large screens and computer controlled LEDs, all driven by a realtime processed radio stream. But the crew was unable to secure the right equipment for the installation, and so the piece evolved into a live performance. And that’s actually a lucky thing for listeners, since this recording is a rare archival document, for which Richard Chartier‘s LINE imprint is already known. The label’s mission statement mentions this “desire to take the tactile qualities of audio installations from the gallery space to listeners’ living rooms.” And that’s precisely what this album is.

The single-track 40-minute piece is an experience of slowly unraveling frequencies spread over a blank canvas with a soft and steady hand. Waves of harmonically-rich pads wash over the landscape like late morning fog. Threads of individual tonalities are stretched over oceans of sound and drone. Incoming transmissions are deconstructed into digitally manipulated bits within the audio spectrum and fed back into effects for further processing. The two self-modulating sound sources include an 1896 Columbia Phonoharp (a small wooden desktop harp) equipped with ebows, and of course an old radio, from which the title of this performance/recording is derived. At the end of the album, there are a few eavesdropped conversations picked up by amplitude modulations in the recording. Caro Mikalef, who happens to be Stephan Mathieu’s significant other, complimented the performance with LED colorfields and zither vibrations. A video of this live performance is include here:

For the past three years the couple has been separated by over twelve thousands kilometers. Stephan and Caro will finally unite this February, when the 24-bit FLAC version of the album will be reissued on Mathieu’s own Schwebung label. LINE, meanwhile, had a great 2012, with many of the label’s releases appearing in Headphone Commute’s Best of 2012 lists. Among the many releases I recommend you check out Chartier’s collaboration with Robert Curgenven, titled Built Through, as well as Frank Bretschneider‘s Kippschwingungen, and of course, Lawrence English‘s For/Not For John Cage. Mathieu’s recommended selections include his collaboration with Janek Schaefer, Hidden Name (Crónica, 2006), his work with Taylor Deupree, Transcriptions (Spekk, 2009), and the solo release, A Static Place (12k, 2011).

Be sure to read Interview with Stephan Mathieu