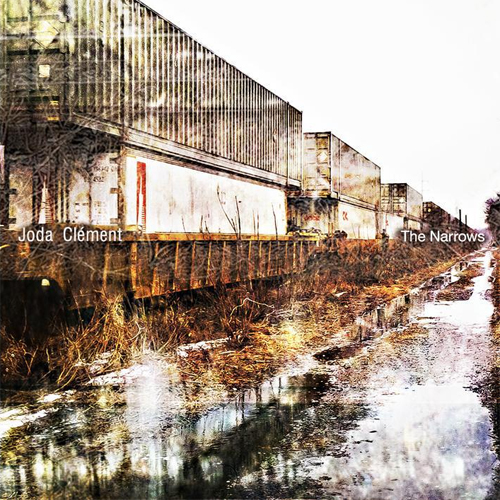 I’m in love with field recordings. The sounds of the forest, chirping birds, the incoming storm. The audio postcard of a particular setting brings the listener directly into the scene. It does not begin with an abstract representation of the artist’s mind – it begins in the forest, with chirping birds, and the incoming storm. Now something descends upon the plain, swallowing textures and sounds in its ginormous glow and humm. The rain brought more than just the water. It carried within this invisible something, that dissolves the air like liquid night. The atmosphere changes, rising in velocity, voltage and volume. Drone sets in, crawling through the fog, like an incoming migrane. Two realities, percieved and yet to be imagined, merge into one. This is the place of The Narrows as I envision it to be.

The musician behind this journey is Joda Clément, a Toronto based sound artist working with experimental music for over 10 years. Clément is an avid collector of found objects and sounds from nartual and urban environments, “investigating hidden properties of sound, space and recording techniques that transcend a distinction between audio and source.” His previous releases include Movement + Rest released by Alluvial Recordings in 2005, and a collaboration with Alexandre St-Onge, Freida Abtan and Erin Sexton on Ostinato 20 (Oral, 2008). On The Narrows, Clément explores his father’s idea of ‘environmental music’:

“Merging various threads into one mass, the construction of the piece seemed to take on a life of its own. As hundreds of sources blurred together to the point where I forget where many originate, I slowly came to look at the piece as a continuation of my father’s idea of ‘environmental music’ – coloured by memories and impressions of those early years in north Ontario, yet re-imagined through the dense and shifting sound pallete of Toronto, where I live and work.” -Joda Clément

The 35-minute long single piece gradually evolves as if it was its own form of weather, changing the landscape and soundscape from within. The Narrows is released on Unfathomless – a sister label to Belgium based Mystery Sea run by Daniel Crokaert (who, incidentally, is responsible for the album cover design on both labels). Unfathormless releases limited edition CDs (about 200 hand numbered copies), focusing on “phonographies reflecting the spirit of a specific place crowded with memories, its aura & resonances and our intimate interaction with it…”