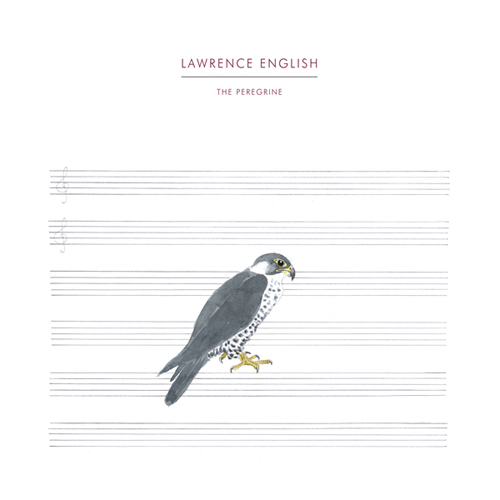 Take a deep breath, press play, and lower the needle. Here’s what happens next. Multiple layers split the frequency spectrum, your own being, and the perceived reality as everything in sight is enveloped in sound. The lowest register appears in the foreground, with deep rumbling bass defining the rhythm and structure. The highs swim below the surface, drenched in distortion and reverb, gradually revealing harmony and tone. Then there’s that space in between, the space between inhale and exhale, the space between those same perceived realities, where everything known merges into something new. This is perhaps the best description I can come up with when soaring alongside Lawrence English through thick clouds of saturated bliss.

The title of the album, The Peregrine, comes from John Alec Baker‘s 1967 book. Even the cover art on both, the book and the album, feature the bird of prey, falco peregrinus, which the author obsessively wrote about in his non-fiction work. On the album, English finds himself inspired by Baker’s descriptions of environment, landscape, and movement, translating his literary journal into an auditory document.

“Swiftly now he is resigning his savagery to the night that rises round us like dark water. The great eyes look into mine. When I move my arm before his face, they still look on, as though they are seeing something beyond me from which they cannot look away. The last light flakes and crumbles down. Distance moves through the dim lines of the inland elms, and comes closer, and gathers behind the darkness of the hawk. I know he will not fly now. I climb over the wall and stand before him. And he sleeps.”
– Passage from J.A. Baker’s book The Peregrine

If you’re lucky, you can own one of 500 vinyl-only copies of the limited release (first 100 were pressed on clear vinyl). Spanning only 34 minutes in length, both sides of the record feature tracks that seamlessly blend into each other, in one continuous sonic sweep, named after passages from the book and their appearances in the dated entries. Thus, “Frost’s Bitter Grip” is the last phrase on December 24th, while “Heavy Breath of Silence” is a quote from March 16th. It is then not surprising to find out that English became deeply fascinated with the book as well. Here’s his story verbatim:

“I first discovered The Peregrine some years ago whilst visiting with David Toop in London. The book had popped up on David’s radar and whilst chatting in his loft, I happened to pick it up. The page I opened to described the sound of a Barn Owl on the hunt. Before I finished that paragraph I knew I needed to own this book and find out more about the somewhat mysterious English author J.A. Baker.

I feel The Peregrine epitomizes a kind of obsessive rendering of landscape and environment. Throughout the book, Baker places central focus on the micro and macro worlds which surrounding him. He expends as much attention on the shape of clouds or the murmur of a river as on the bird, which inspires him to write. At no point does the idea of humanness come to dominate – in fact human kind merely appears as haunting images that, as Baker summarizes, ‘stink of death’. Elegantly misanthropic. Even the author remains oddly mute – we never discover anything about him, not what he does, how he lives or even where he sleep or eats. He is merely a conduit through which land is rendered.

This record is a homage to The Peregrine. Having not spent any great amount of time in East Anglia where the book is set, I have used Baker’s descriptions and suggested mappings as a guide to the character and composition of the LP. The Peregrine has profoundly affected my work and it’s for this reason I felt compelled to create this piece.

I hope it conjures up for listener just a few of the lasting impressions the book has left on me and in the process I dearly hope others can discover J.A Baker’s evocative writings – thankfully now back in print!”
– Lawrence English June 2011

It would be impossible to avoid comparisons of this album to the best from Tim Hecker, Ben Frost, Fennesz, Stephan Mathieu, and Jasper TX. Needless to say, The Peregrine is highly recommended, as it indeed made our Best of 2011 list of Music For Bending Light and Stopping Time. Be sure to also pick up Lawrence English’s releases on 12k, Touch, and his very own Room40 label. This is ambiance to be blasted through the walls towards your neighbors!

Don’t forget to read our Interview with Lawrence English.