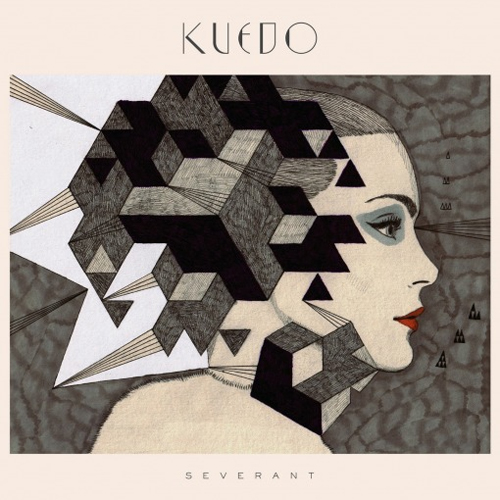 Jamie Teasdale, formerly one half of dubstep duo Vex’d, is now working solo as Kuedo. Fittingly released on Mike Paradinas’ Planet Mu record label, it harkens back to the mid-1990′s Artificial Intelligence series of albums on Warp that led to the somewhat unfortunate genre name of “IDM.” There are certain keywords that appear to be obligatory when talking about this album, so let’s get them out of the way: Vangelis, Blade Runner, Tangerine Dream, Carly Simon, Tony’s Theme From Scarface, Chicago’s footwork, and ‘coke rap’. There we go. Whoops, nearly forgot 808. That’s better.

Severant in some senses shares a lot of DNA with Rustie‘s Glass Swords (Warp, 2011) – there’s definitely a sci-fi element at play here and indeed the 1980′s nostalgia is up front and centre. Wilfully low-fi sounding instrumentation is an element of both albums too – Severant appearing to be almost hand crafted rather than edited together on a computer: I can happily imagine a live band behind a huge bank of synthesizers, 808s and Keytars playing this album to their hearts’ content. Where the two part company, however, is that whilst Glass Swords is like an ADD-afflicted blipvert of influences, Severant is defiantly consistent in its sounds and atmospheres.

“As reality shapes imagination and escapism affects your choices in the real world, there is a strange relational loop between the two and the space in between the two. There’s a bitter sweetness in that gap, it has a certain emotive quality, kind of in between being and non-being. I wanted to capture a really futurist sentiment, kind of melancholy and grand luminescent, so I used the instrument that most evokes that for me – that sweeping Vangelis brass sound.” – Jamie Teasdale

There’s a glacial flow and mathematic, almost architectural precision to the 15 emotive tracks of this album. No track overstays its welcome, and the album as a whole is a brisk listening experience, as well as a wholly immersive one. Tentative, tinkling melodies dapple the big brassy synth washes like plankton dancing around a killer whale; jittery spiders-legs percussive rhythms call to mind a long-forgotten time when Autechre were an act one could relax to. Ultimately, Severant is a beautiful body of work that manages to sound both upfront and horizontal at the same time (I’d be fascinated to see how people react at any live shows). Don’t just take my word for it though, you can stream the entire album on the Planet Mu website.

Review by Orangewarrior, originally appearing on clockworkshorts.com. Republished with permission of the author.