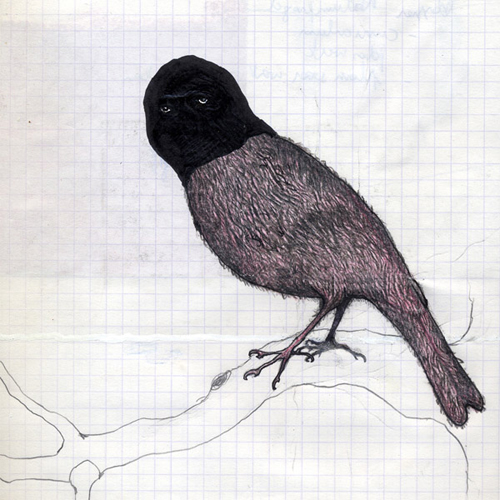 If you haven’t been properly spooked by the previously reviewed Grimoire from Kreng, well perhaps this little gem will do the trick. At times borderline creepy, the hair-raising screeching howls of Kaboom Karavan convey an atmosphere already painted on its cover (courtesy of the label’s head, Erik K Skodvin): an unidentifiable feathered being, with a dark hooded head and piercing (human) eyes stares back at us from its outlined tree-dwelling.

There are, however, more than just a few similarities with Kreng. Kaboom Karavan is also from Belgium (what are they drinking there?) and has a background in theatre, film and contemporary dance. So it’s not a surprise that this collective, led by Bram Bosteels, previously collaborated with Kreng. On their sophomore album, Barra Barra, instruments spring forth beyond their orchestral constrains, wiggle and wail in angst, as if obstructed by their players. Organic sounds are writhed and bent beyond their recognizable framework.

“Through a haze of pizzicato strings, clouds of sullen reverberation and clamorous percussion you get the feeling that you have been catapulted into a universe just outside of perception; somewhere cold and unforgiving where regularity is turned upside down just to toy with our strict ideas of reality.”

Slowly lurking beneath peripheral sensations, the music of the album is fitting for a haunting dream and a terrifying nightmare. Something is shifting, clanking, breathing, and scratching above the surface of your ear canal, threatening to crawl in and occupy your awareness with its foul and vile essence. Be sure to check out Kaboom Karavan’s previous release on Mexican label, Umor Rex, titled Short Walk With Olaf (2007). I highly recommend you listen to Barra Barra with all the lights on. I claim no responsibility otherwise. A great find for Miasmah!