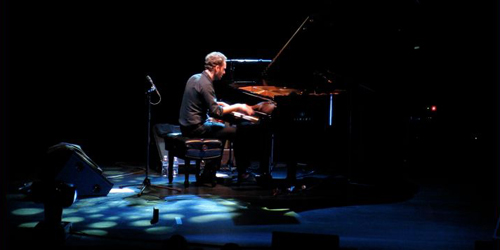 Talk about the moment when you discovered that you had synesthesia. How has this condition affected your composition?
I always had this condition, but never really understood it or knew there was so much information about it until I started to study painters with this same condition. It really opened up a whole new world that connected painting and music, sound and color. I really started to read a lot about this connection when I was asked to perform at the Guggenheim in NY for their 50th anniversary, it was also the opening of the Kandinsky exhibition at the same time. Walking through this retrospective it was incredible how musical these paintings were, and how his series of “compositions”, which he felt were his musical interpretations, how they really FEEL orchestral.

In my own compositions it helped me to have more freedom expressing these ideas and perhaps also help me get ideas across to other musicians that I work with. It’s a language I understand, and I suppose since I am not formally trained it gave me some grounding in what I believe is a really important part of music and composing.

Describe your process of composing solo piano pieces. Do you improvise by the piano for hours? Does a single melody simply come out of nowhere?
I think all pieces start from improvising, and slowly start to take form over time. I do like to get them to a place where there is an idea and structure… sometimes that can change at the last-minute in the recording process. But I like the idea of every note being important, and no note is treated as a throw away… I want them all to count and mean something to the piece. I guess that’s also why I work in a minimal way… I think a lot of music has unnecessary notes that just seem to be there for the sake of making a piece more ornamental. I am interested in the core of what makes music work.

From your earlier solo works, I can hear a lot of classical influences in your sound. Who are your favorite classical composers and why?
Yeah I spent a lot of time listening to the classical composers, and of course it’s found its way into my work. I love this deep sense of composition which I think really was unique to that time… no film, tv, radio, or all these external distractions we have now. Does anyone have years to develop a single piece of music anymore in this world where everything must happen so fast?

Did you like studying the piano when you were a kid? Were the lessons something you looked forward to, or did it feel like a chore? What were the other kids doing in your neighborhood while you practiced for hours? And finally (I know this is a loaded question), how do you think this has affected your childhood, and inevitably your adult life?
An interesting question… I didn’t really have serious piano studies, so it was really my choice to learn. Just simple lessons from our church organist, no conservatory or anything. I really loved to play… of course there were times when I didn’t want to practice… I just wanted to be able to play instantly, and of course you have to put the time in. Most of time I was pretty happy to… but yeah, your friends are going out to play and I would stay in, that’s always hard when you’re a kid. But it was not a really rigid schedule I had, and perhaps now I wish I had so that I could have had a better training when I was young, as I am catching up to a lot of lost time now.

I had a long period where I didn’t play piano as I was moving around a lot in my teenage years, and it was not until later when I started to get into playing guitar and playing in a band that I came back to it. Now in my adult life I am trying to learn all the things I wished I had done when I was younger, but I guess the positive thing about that is I really want to, and its a pleasure to stay in play.

Tell us about composing for other musicians and instruments. What was the synergy like between you and the players? Did you write a passage knowing that a particular musician (like Peter Broderick) would be executing it?
It’s been an amazing experience and I feel really lucky to have worked with the caliber of musicians I have. ACME quartet who record with me in New York are some of the finest string players around and brought the music to such a higher level that I imagined. It was a big learning experience for me to understand what the musicians can really bring to the music you write and how important it is to have people who can continue to work with and create a language. With Peter Broderick it was a mix of passages that I wrote and some improv on his part. He is a musician with a great sense of improvisation and I think to box him into a part that is already defined is to miss out on what makes him a wonderful player and musician.

The pieces on Lumiere were composed over three years in different settings. What was your favorite location, surrounding environment, and more importantly a particular piano that you played?
Well that’s difficult to answer as each place has been really special to me for different reasons. In Italy I was working in this old converted farm-house that I had made into a studio… nothing but nature and peaceful quite all around, and in Berlin it was all the sounds of the city around me and the pulse and energy of the city. But one special place where I recorded was Grunewald Church in Berlin, it has the most incredible acoustics and one of the most beautiful pianos I have ever played, a 1950s 9-foot Boesendorfer, just an incredible instrument that music flows out of! In New York we recorded in a converted book store, and in Los Angeles I did some recording in this old 70s California studio where my friend has this incredible collection of old keyboard instruments… almost anything you can imagine he has it! We used some archaic synths, tack pianos from the 1920s, celeste through leslie cabinets… we were getting lost in there!

Drake Doreumus’ film, “Like Crazy”, which you have composed a soundtrack for, has just won the US Dramatic Competition Grand Jury Price at the Sundance Film Festival. How do you think this achievement will influence your exposure to more film scores in the future, if at all?
Yeah this was a big surprise to win the grand jury prize. We were all so happy… it’s really an indie victory as there is no one famous in it and worked on this project for nothing and had no idea it would be so well received! Everyone worked with really pure intentions on a project they believed in. I guess it’s already having some influence as I have been offered a new film score, we will see if this is a lasting effect!

I’ll admit that I’m not really familiar with your Dévics project. Can you tell us more about your collaboration with Sara Lov and the three releases on Bella Union?
I think this was a really important and fundamental time for me musically as it was my main musical project for years. It helped to understand how to write, and where it comes from. I’m proud of the work Sara and I have done together over the years, exploring everything from rock, electronic, folk, classical… And I think my rock sensibilities are always with me, that music is not about being a virtuoso, but having a voice and something to say and transmit… I always connect with this visceral way of approaching music.

And finally, what are you working on right now?
At the moment I am just finishing a new project with Adam Wiltzie from the group ” Stars of The Lid”. It’s a record full of big restrained compositions that we recorded mostly in Berlin and the old GDR east Berlin radio studios. The name of the project is called ” A Winged Victory For The Sullen”. I thinks a really special record and will come out in the fall of this year. I also have some film projects coming up, and I am preparing for a 3 week tour in China which I’m very excited about!