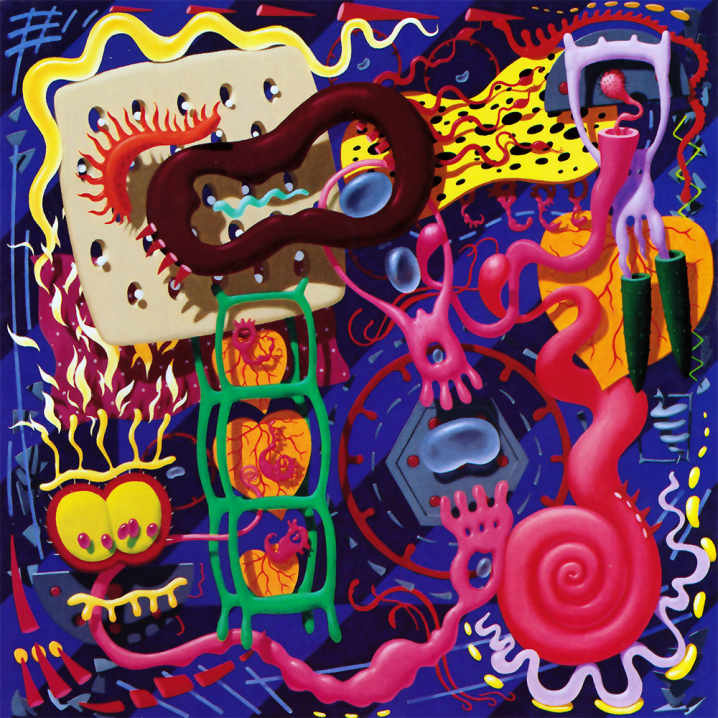 Twenty years ago, in May of 1996, Orbital released their fourth full-length album, In Sides. I remember the day when the disk finally arrived, and I carefully put it into the CD tray while leafing through the booklet. I remember when The Box finally came on. The entire ritual of absorbing the music for the first time will forever be embedded in my mind. And how many times have I heard this album since then? The count is immeasurable. In the car, on the train and on the plane – it has always mesmerized me with its familiar path, unexplored depth, and hidden turns. This was the sound of electronica that kept my neurons alive. And it excites till this day. A true classic.

Brothers Phil and Paul Hartnoll came on the scene with their self titled album (aka the Green Album), Orbital in 1991. By the time the follow up hit the streets, Orbital 2 (aka the Brown Album), every aspiring DJ and closeted ‘raver’ knew of the group’s name. Tracks like “Chime”, “Omen” and “Satan” all reached the UK Singles Charts. And who could forget the beautiful Halcyon? Orbital’s third album Snivilisation, released lon ffrr in 1994, reached #4 on the UK Albums charts. The track and single, “Are We Here?” featured vocals by Alison Goldfrapp, and once again topped the charts.

Rising from the rave, into the bedrooms and headphones of discriminating listeners, the British electronic duo has become one of my personal favorites. Repetitive phrases that hypnotize and lift above the conscious plane of existence, loop and layer sound with endless instruments and melodies. Introducing one theme after another, these slowly build up, drop out, and then explode in one final array of sound. The building blocks of each track peel off and reveal the layers of individual elements that together comprise an elegant instrumental piece, folding and shifting, in the never ending configurations of the Rubik’s Cube of music. And my brain is happy.

In Sides became Orbital’s second Top Five album, and revolved around a theme of “ecological disaster and dissatisfaction with society“. The name of the album referenced the fact that it originally came out as a 3×12” 6-track LP box set, with only one track etched per side. The track “The Girl with the Sun in Her Head” was dedicated to Sally Harding, a photographer for the Volume magazine, who died in 1995. This track incorporates electricity from a Greenpeace solar power generator and opens up with a heartbeat that continues throughout the development of the track. A true marvel in itself.

The track “P.E.T.R.O.L.” was selected by Clint Mansell to appear in Darren Aronofsky’s film π. While “Adnan’s”  was written for The Help Album for the benefit of War Child charity. Alison Goldfrapp appears on the album once again, singing on “Dŵr Budr“, which is Welsh for “dirty water”, written after the MV Sea Empress oil tanker ran aground near the southwest coast of Wales in 1996. Hmm…

The US version of the album included a bonus CD with additional tracks, which were also released as two separate singles: Times Fly EP and The Box. The latter included a 28+ minute extended version of the track, The Box, with lyrics and vocals by Grant Fulton, who previously contributed to Orbital’s single, Belfast/Wasted. In 2007, Paul Hartnoll confirmed a list of gear used on the album to include the Oberheim Xpander, ARP 2600, Korg Wavestation and a collection of Roland synths like Jupter 6, SH-09, SH-101 and of course, TB-303. And yes, the drum machines TR-808 and TR-909 are always present. This should keep the geeks happy.

Back when Orbital’s sound was still classified as ‘rave’, ‘breakbeat’ and [god forbid] the early taste of ‘techno’, In Sides took a giant leap to represent the act as a contemporary piece of electronica worthy of professional studio and even radio play. Selected as one of the best albums of the 1990’s by independent and mainstream critics, In Sides, continues to satisfy and fascinate. If this flashback got your taste buds wet, pick up Orbital’s 20 year celebratory release, simply titled, Orbital 20 (Rhino, 2009).