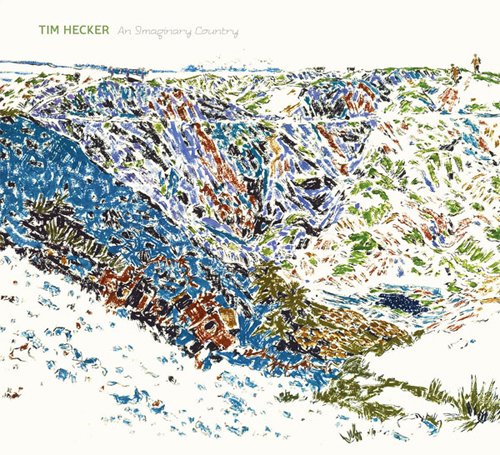 Released in 2009, An Imaginary Country by Tim Hecker continues to satisfy my aural cravings. From persistent nonchalant two note passages dispersing in reverb, to pulsating bass undertones accented with frequency thick chromatic chords, and concrete layers of sonic treatment placed in all strategic places, designed to hold this fragile structure erect, the architectural plans behind this album are as solid as that of a monumental building, rising skywards past all of the clouds, remaining one of the attractions, long after its creator is gone.

An Imaginary Country is the sixth full length album by this Canadian based musician and sound artist. His discography stretches back a decade (back in 2000, Hecker was recording under the alias Jetone), with numerous releases on Kranky, Room40, Mille Plateaux, Alien8, Staalplaat, Fat Cat, and Force Inc. Hecker is focused on “exploring the intersection of noise, dissonance and melody, fostering an approach to songcraft which is both physical and emotive.” Performing at many international festivals (including Sónar and Mutek), creating sound installations and commissions for contemporary dance pieces, Hecker has sculpted a staple sound of provocative ambient, too intelligent to fall in the background.

In a shadowy corner of the construction of this imaginary region, a distorted guitar attempts to break free of its chain-hold, only to be restrained with silenced and muffled with noise. The walls of this dwelling are thick and fuzzy, sometimes letting multiple tracks blend into each other seamlessly, until you arrive in a different place. “Borderland” rips through the constraints, like the shattered memory of a long loved melody, released in a solitary cell to bounce between the walls in a perpetual echo, crying on the final path of its demise. On “Utropics” a distant singing of haunting voices mesmerizes the mind until it is cut with another onslaught of wailing guitars and drifting mid-range saturations of “Paragon Point”.

From the label’s press release we gather a few interesting notes:

The title comes from a quote, “The imaginary country… one that cannot be found on a map,” uttered by Debussy in regards to the sad state of musical affairs at the time, arguing that music was in dire need for alternate worlds of possibility. In some ways this is a utopian work, in the sense of the term meaning that of ‘no-place’. All the tracks are landmarks in a dream cartography.

Released on Chicago based Kranky, An Imaginary Country has already been hailed to critical acclaim, including a spot on Headphone Commute’s Best of 2009 : Music For Bending Light And Stopping Time. Be sure to check out his previous release, Harmony In Ultraviolet (Kranky, 2006), as well as his collaboration with Aidan Baker, Fantasma Parastasie (Alien8, 2008). His 20-minute EP, Norberg (Room40, 2007) is also a worthy addition to anyone’s collection. Recommended if you like Fennesz, Belong, Stars of The Lid, Loscil and Lawrence English.

See also Two and a Half Questions with Tim Hecker