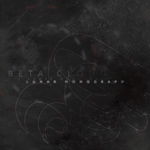 Composing under the Beta Cloud moniker, Pace has had the pleasure of performing and releasing music with Aidan Baker – An Open Letter To Franz Kafka (2007), and Lull – Circadian Rhythm Disturbance (2008), all being published on Laughing Bride Media. But forget about name dropping for a second, and get immersed in the ethereal drift of weather torn sounds. In between the frequency currents, Beta Cloud’s third full length album, Lunar Monograph, stands out on its own, setting up the mood for all the ambient sounds of 2010.

The tracks on the album are named after the large, dark, basaltic plains on the Earth’s Moon, known as Lunar Maria. This is where the titles for Marsh of Sleep, Sea of Rains, Bay of Billows, and the above mentioned Sea of Tranquility come from. The latter, a 21+ minute ambient soundscape, full of blissful white noise, bird sounds, and acoustic wind, is drenched in a strumming of a shoegaze guitar, organic chords, and ghostlike sounds of the sleeping world. A stunning mediation on our natural satellite. To reveal more of the concept behind the album, Carl Pace explains:

in a broad sense, [the album] addresses our own perceptions of our lives; the world around us, the moon above, and what lies beyond that; the waxing and waning of our own personal existences. and in a very broad sense, it addresses the concept of ‘lunacy’. there’s a quote from carl sagan on the inside sleeve of the disc that reads: “We knew the Moon from our earliest days. It was there when our ancestors descended from the trees into the savannahs, when we learned to walk upright, when we first devised stone tools, when we domesticated fire, when we invented agriculture and built cities and set out to subdue the Earth. Folklore and popular songs celebrate a mysterious connection between the Moon and love.” i think that sums it up nicely.

The Lunar Monograph, or a concise study upon this very specific single subject, has been composed in the span of about three years. The result is an album with ideas borrowed from live performances, studio pieces, and field recordings, folded neatly into a sonic package, and delivered directly onto the doorstep of your soul. For the source of the material, Pace compiled recordings of “some of the beautiful things in life that we take for granted every day due to sensory overload, subway chatter of several voices in NY and Toronto that become one cacophonous and expressive voice in the process, beautiful thunderstorms that lull us to sleep on summer nights, the sounds of birds in my garden that i watch flourish and wither without fail every year, fireworks displays where people gather almost instinctively to realize that there is something greater than we out there. and others…”

With the artwork by Chase Middaugh, and mastering by James Plotkin, Lunar Monograph will surely please the fans of Tim Hecker, Lawrence English, Simon Scott, and of course, Taylor Deupree and his 12k output. If I’m doing another Best of 2010 list the same way next year, then Lunar Monograph, will surely get filed under my Music For Bending Light and Stopping Time category. Highly recommended.

See also Two and a Half Questions with Beta Cloud