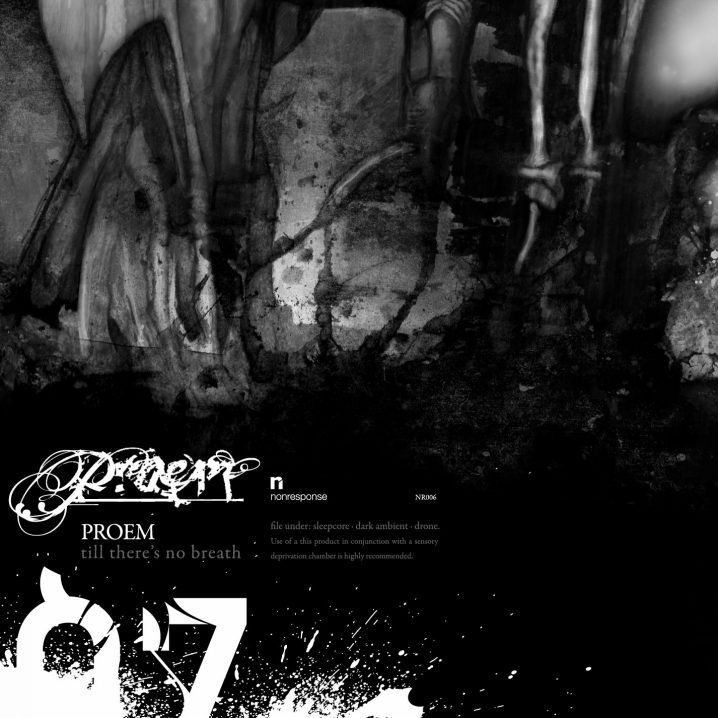 Proem doesn’t waste any time in setting the scene on Till There’s No Breath. On opening track These Are Demands, it’s as if there is a massive space ship descending from the sky, metal screeching and thrusters on full blast as it lands right in front of you. There are echoes of distorted alien-sounding voices mixed into the grating wall of metallic noise. The atmosphere is filled with foreboding. And it doesn’t let up on A Skin That Crawls, with its huge thumping footsteps echoing off the walls of what could be an underground sewer or cavern.

If these words sound over the top, I defy you to listen to this music without having your imagination run rampant. And the rather disturbing track titles — A Skin That Burns, Faceeater, Deadplate, Dull Throbbing – will inevitably nudge you in a particular direction. This is a dark place and death hangs in the air. But it’s not the kind of malevolence that hits you over the head with a hammer. It’s a quiet menace. An ambient nightmare. Like when the fellowship in the Lord of the Rings entered the Mines of Moria, you know that evil lurks deep within. Or at least an amoral consciousness. The title track Till There’s No Breath evokes a sensation of paralysis. Like being unable to move and helpless to escape the unthinkable.

The man behind these disquieting soundscapes and the Proem moniker, is Houston, Texas resident Richard Bailey. He has been releasing music since 1999 on labels like Merck, n5MD, and Hydrant, and Till There’s No Breath is his seventh full-length album, his first for the recently resurrected Nonresponse imprint. It’s quite a departure for Bailey. His previous releases have been of the classic IDM variety and he has been seen as one of the early members of the US-based IDM scene that started around 2000. Till There’s No Breath, on the other hand, is pure dark ambient. Save for one or two tracks, Proem does away completely with the beats. The sound design and textures are the thing… and they are impressive.

Thankfully, Proem’s world is not a bottomless pit of doom. After the detachment of Faceeater, the mood lightens with Coil In Small Field. It’s as if there’s a break in the clouds, if only temporarily. Bright pads suggest that something positive is happening, although the deep rumble in the background refuses to give way. Alas, in the end, after the brighter tones have evaporated, the sense of unease remains. Nevertheless, the second half of the album is calmer and less oppressive. The subtle glitchy beat of Alt Enter The Busket will even get your toe tapping and head nodding. And Dull Throbbing is more soothing than anything that precedes it. The metallic grating, distorted rumbles and alien noises of the first half of the album have completely given way to gentler synth washes that sound at times like a church organ in the distance.

All in all, it’s an immersive piece of work from Bailey. He paints a vivid picture, although it may not be one that you’ll want to look at for too long at a time. The release includes a free digital EP, the code to which is hidden in the physical artwork. If you own a digital copy, send Proem a screen shot of your receipt and he’ll furnish the login details. The artwork on the album is made up of seven separate watercolor paintings that Bailey made and then stitched together in Photoshop. The full poster is available for viewing and purchase on the Proem’s site in the merchandise section. Recommended if you like the dark soundscapes of Murcof, Hecq, Lustmord and The Mount Fuji Doomjazz Corporation.