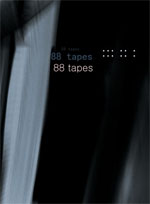 Keshhhhhh Recordings is based in Cambridge (England) and is run by Simon Scott (you should know him as the ex-drummer from the shoegaze band, Slowdive). I’m not exactly sure what Simon has in mind for the future of his label, but I must say, he’s off to a pretty good start. First of all, he’s got Taylor Deupree to master the entire compilation in his 12k studio. That alone should give you a pretty good idea about the intent here. And the roster of artists also tends to speak for itself.

The eighteen track collection of ambient vignettes and sound explorations all revolve around a central theme. This theme is less of a melodic structure, but rather a concept around a particular selection of recordings recorded by Simon Scott on an audio cassette back in 1988. On the liner notes of the release, Scott elaborates:

“In 1988 on another rainy Saturday afternoon, whilst looking for sonic inspiration, I decided to take apart and re-assemble my stereo that had a quarter inch input socket as well as a turntable and tape player/recorder. The result was a fantastic malfunctioning, stuttering and glitching piece of equipment that suddenly realized my ideas of creating new sound. I promptly pressed the record button and let rip on my electric guitar and promised myself to write a song from the results one day.

“In 2008 the tape was rediscovered purely by chance in a house move and the rediscovery of this TDK inspired me to contact a group of artists and composers who I feel are talented and relevant today. There was just a simple single track sent off via email to inspire them to compose a piece of work for this compilation if they had the urge. They did and I am forever grateful to everyone involved in deconstructing the tape track and creating this album.”

And what a spectacular group of artists it is! The compilation opens up with an sound sparkling interpretation by Yasuhiko Fukuzono as Aus flowing right into a beautiful vocals of Sanae Yamasaki, [aka Moskitoo – see her excellent album, Drape (12k, 2007)]. We then move into noisy guitar feedback and lo-fi acoustic glitch by Mark Templeton (see his numerous releases and appearances on Anticipate Recordings). The 12k roster continues to propagate this selection with contributions by Keiichi Sugimoto as Fourcolor, Sawako, and one of my favorites, Lawrence English. Besides above mentioned aus, a few more artists from the Japanese label, flau, show up later, like Orla Wren and John McCaffrey as Part Timer.

Chicago based Kranky Records enters the circle of Scott’s friends with a beautiful heavily reverberated breathy piece by Christopher Bissonnette. Further on a release we see his labelmate, Thomas Meluch contribute a track as Benoît Pioulard. We also see an appearance by Akira Kosemura, who previously secured a spot on Airport Symphony – Virtual Terminal, a free deigital companion edition to the Airport Symphony, compiled by the above mentioned prolific Lawrence English and released on Room40 in 2007.

A third through the release, Simon Scott finally appears with his own interpretation. A sound artist and a label owner of and/OAR, Dale Lloyd contributes a sonic carpet of luscious frequencies, followed by a ghost-like echoes of gated guitar and vocals by Matt Robson recording as Random Number. Additional appearances include tracks by Greg Davis, Adam Pacione, Ateleia, and Hannu.

An excellent roster, don’t you think? Meanwhile, Simon Scott prepares for his upcoming solo debut, titled Navigare on none other than Miasmah recordings.