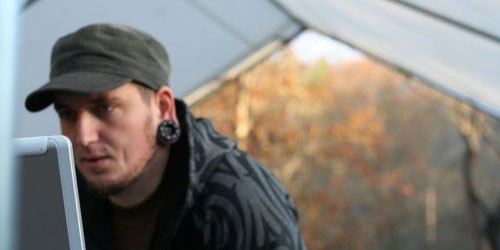 How would you say your sound has evolved over the years?
I wouldn’t say my sound as evolved as much as it has been refined and expanded. Instead of exploring my personal aesthetic in one particular genre, I’ve branched out and brought my creative ideas to other forms, each one building off of what I’ve learned from the previous, and expanding the tonal quality of the whole.

How much of your exploration in ambient and modern classical releases under your real name leaks into your Bluetech work?
I think all of the exploration refines each project. My ambient work really gives me a large palette to explore texture, so naturally that finds it’s way into the bluetech project. The dance stuff is all about kinetic motion, and rooting things for the body, so it’s added a funkier/heavier vibe to the latest album.

Describe your music to my 95-year old grand uncle.
I called my music spacehop, or cosmic funk. I play off of lots of minimalist motifs and try to establish a sense of hypnotic rhythm, like the auditory equivalent of watching kelp beds swaying in the ocean. There seems to be a consistent thread of hopeful melancholy, and a definite “voice” or melodic element portrayed through synthesis of various sorts.

Tell us about your production setup and what hardware/software do you use.
I’m all about Ableton Live these days. Have done a lot of modular programming with Reaktor, Kyma, Analog Modulars, etc. though at the moment due to financial concerns, my studio is stripped down to just a laptop with some choice plug ins.