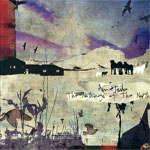 On some level, I’m a little surprised that no one is talking about Ametsub as much as I am. And I’m not just hyping up this Tokyo-based Japanese artist. Even Ryuchi Sakamoto has allegedly proclaimed, “I love this album. I have become a fan”. Meanwhile, I’ve been listening to Ametsub’s music since his debut release three years ago, Linear Cryptics (Progressive Form, 2006). For me, the discovery of this artist was totally accidental, and to this day I don’t know the original source that incited me to pick up the album. But here I am, raving about his second solo release on Progressive Form, titled The Nothings Of The North.

And here’s what I love about it. Ametsub’s music masterfully incorporates precision glitch into modern classical and future jazz. An accompaniment of tight bass lines and micro programmed rhythm is dominated by Ametsub’s beautiful piano playing. The gorgeous and melancholic melodies have been in turn re-sampled, re-looped, and re-triggered to create frantic digital errors that skip across my dazzled memory. The light grooves incorporate elements from trip-hop, dub and abstract idm. The predominant cuts and clips are also extended to vocals, eventually morphing them from words to instruments to choppy bits of percussion. This should keep your cranium busy.

Ametsub has already performed alongside respected artists such as Vladislav Delay, Bichi, Numb, and Takemura Nobukaza. His second release to date was actually a collaboration with Jimanica titled, Surge (Mao, 2007). I recommend you pick that up as well, and seriously, get your hands on Linear Cryptics! I guess the single reason why Ametsub has not been completely recognized is the lack of distribution in North America and Europe. It is difficult to get your hands on a physical copy of the album unless you actually order it to be shipped from Japan [I got Linear Cryptics by contacting Ametsub on myspazz]. Digital copies of both albums could be found on iTunes and Beatport. This album is highly recommended for fans of Arovane, Plaid, Murcof and Lusine.