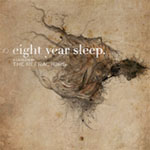 I first discovered The Refractors through their hand packaged and physically painted copy of All Colors Run EP, which they self released in 2008 and were kind enough to send over. I say “discovered” not because I want to take any credit for finding them before they got picked up by San Francisco based Dynamophone Records, but because stumbling upon this duo was a real pleasure, as it is whenever one uncovers a previously unheard artist. My initial reaction to the sound is worth repeating once again, and so I quote my previous review:

The Refractors are Joseph and Kayline Martinez of Pacifica, California, who turn running colors, abandoned sounds, and loose threads back into art. The sixteen minute All Colors Run EP is a collection of vignettes and gentle sketches feeding analog instruments and field recordings into cold machines. The sound is described by the artists as “vegetation coming up through the cracks of man-made structures.”

On this debut full length album, 8 Year Sleep, The Refractors catalog their musical journal entries beginning with the year 2001. Eight years, eight memories, eight movements. Each track represents a collection of dreams, grievances and flashbacks, woven with the accompanied instruments, field recordings, and silence. With a nod towards political events taking place in the last eight years of American history (the first track, for example, is titled A Fall Disguised as a Rise), the duo captures emotions with a surreal juxtaposition of abandoned fragments. The album is made up of dying dusty microphones, acoustic attic guitars, kitchen drawer percussion, splattering water, scratched voices, and lost pieces of home.

It is also worthwhile to mention that the tracks Lull and Inherit include contributions from a guitarist Clayton McEvoy, who has been recently signed to another favorite label of mine, Hidden Shoal. Watch for his upcoming release under the alias of Sleeping Me titled Cradlesongs (Hidden Shoal, 2009) in May.

This is a great catch for Dynamophone Records, who snatched the Refractors and released this album in their Parcel Series – a limited edition 3″ CDr, packaged in a beautiful compact box, with artwork by Eric Lacombe. Previous releases in the Parcel Series include The Lullaby League‘s Filia Melusine, Fjordne‘s Last 3 Days of Time, and A Lily‘s I Dress my Ankles in God’s Sweetest Words, among the many others.

And one more thing! The Refractors’ 8 Year Sleep will be the first release on Dynamophone’s new Lilian Series format, which will be released on a tiny 1G USB flash drive held in a slide-top tin with a tiny neodyne magnet. How cool is that? This version will come with six extended tracks, images, lyrics and additional information behind each track, like this little fact about Farewell Sister: “She was assassinated two months after retuning to Pakistan from exile”. A great collector’s item breathing life into the meaning behind a musical album as a concept.