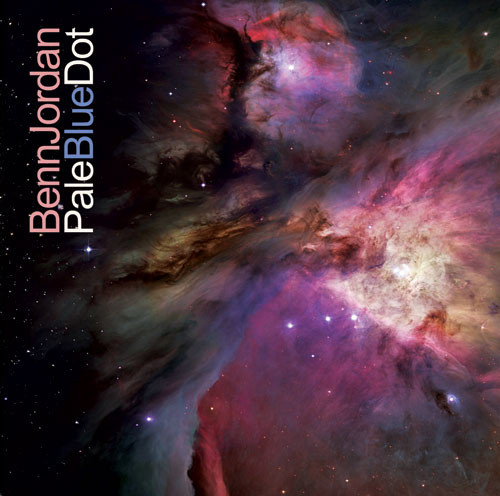 I guess the reason that I keep listening to Benn Jordan is the fact that he simply makes beautiful music. Period. In fact, I catch myself restraining from listening to Benn Jordan too much. His short, full of witty ideas tracks, produced under The Flashbulb moniker, have already conquered all of my last.fm charts. And the debut album under his real name is quickly gaining ground. Pale Blue Dot is Jordan’s entry into building ambient soundscapes, released on his very own Chicago based label, Alphabasic.

Composed as a tribute to an astronomer, Carl Sagan, Jordan explores the insignificance of our daily conflicts in comparison to our chance habitat on a tiny planet in the midst of infinite space. From 6.4 billion kilometres away, Earth is nothing but a tiny pale blue dot. In his book, Sagan invites us to contemplate this miracle.

Look again at that dot. That’s here. That’s home. That’s us. On it everyone you love, everyone you know, everyone you ever heard of, every human being who ever was, lived out their lives. The aggregate of our joy and suffering, thousands of confident religions, ideologies, and economic doctrines, every hunter and forager, every hero and coward, every creator and destroyer of civilization, every king and peasant, every young couple in love, every mother and father, hopeful child, inventor and explorer, every teacher of morals, every corrupt politician, every ‘superstar’, every ‘supreme leader’, every saint and sinner in the history of our species lived there – on a mote of dust suspended in a sunbeam.

The tracks on Pale Blue Dot are titled around an interplanetary voyage. From Ascent, to Infinity Alone, Floating Vacuum, A Distant Earthrise, and finally Safe Landing, the pieces flow fluidly from one to another, capturing a story told without time. And Pale Blue Dot is more than a thematic album. It is an ambient journey through hypnotic sound, quietly drifting you away into space. The transformations are flawless, and many at times I seamlessly reach that sacred place of presence, by the middle of the album.

If you are expecting Jordan’s playful breaks and acid lines, turn away now. But if you are a patient, pondering listener, then you’ll be repeating the album over and over, as I get to do now, for its fourth time this morning. A rewarding experience for a discerning ear. Recommended if you enjoy music from Evan Bartholomew, Biosphere, Christopher Bissonnette, Hammock, Eluvium, Manual and The World on Higher Downs.