Let’s start at the very beginning. Can you tell us how you got involved in composing, and what was your very first piece of gear?
Hey, thanks for having me on! I started composing when I was sixteen – at that time I realized how powerful the computer was not only for playing games but also for combining and creating WAV files. Before this, I used to play the piano and the drums but I somehow never got really motivated in just playing one part of the music. Experiencing these new capabilities made me realize that on a computer one can create all the components of which music is made of – an electrifying thought for me! My first piece of gear was the almighty Korg Electribe ER-1 – I learned so much from it! (and saved so much time on it ;))

How many different studio iterations have you gone through, and what does your final setup look like right now?
That’s a never-ending story: I suppose it was at least 10 major iterations during which the setup got blown up and shrunk to a useful size again. Two things I realized: too many synths and outboard is usually a waste of time mostly because you spend it for cabling and understanding what you did (think “patchbay”). Also, don’t be cheap on speakers – good ones save so much time because they help make the right decisions. That’s what they do.

My setup now is Bitwig in touchscreen mode, running on a very fast Windows PC on 96kHz and a roundtrip latency of 4ms. My converter is a merging Hapi and I listen through either Kii THREE speakers, Shure KSE1500 in-ears, or the classic Sony mdr 7506. I have some outboard which I love: my own “Instant Mastering Chain” that I use on groups and live on stage, the API 2500 comp and the al.so dynax2 (a very clean and versatile optical compression), my beloved bricasti m7 reverb (loud fan noise but rooms that are missed heavily once they are switched off). I also have a collection of hardware synths that I only put on the table when I decide to use them. I realized how much I get confused when looking at knobs and possibilities all the time so I put them into a drawer. The synths I love are the Cwejman S1, the crazy Pulsar23, my beloved Tanzbär, the OP-1 just to name a few. 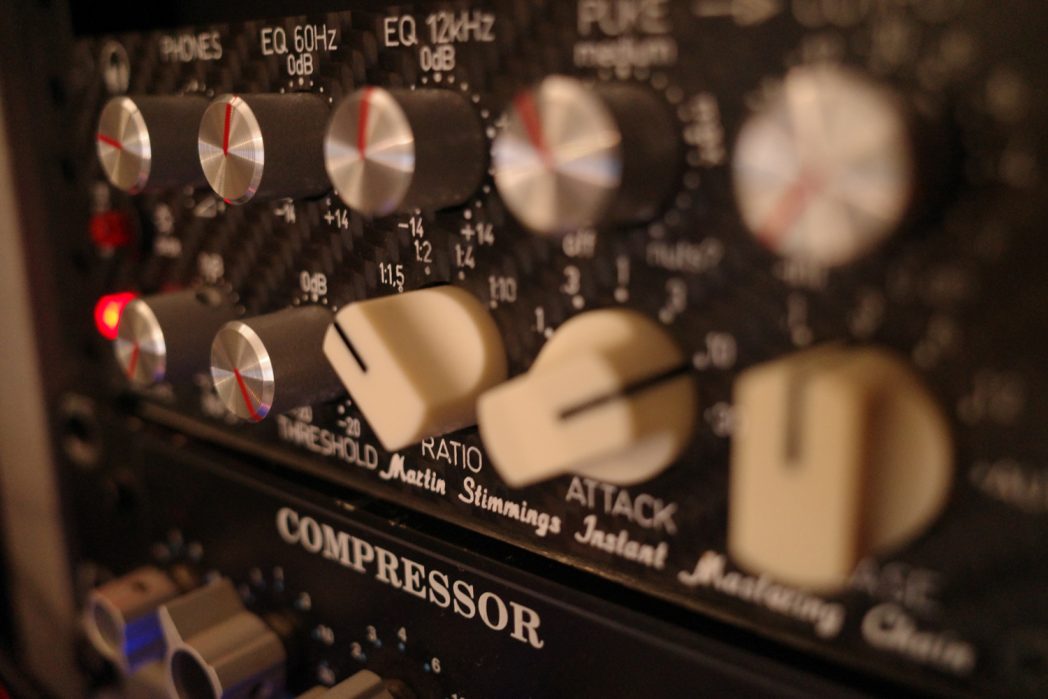 Tell us about your favourite piece of hardware.
I have a couple, but the most important have always been the speakers. The Kii THREE is a six-way speaker that is designed for precision instead of sound pressure. Every one of those six speakers has a 250watt amp and everything is driven and controlled by a computer that calculates a phase-coherent signal a little bit in front of the speaker. This phase coherence seems to be the next step in loudspeaker design as it’s possible to hear sound through a one-way headphone: very musical and very… how can I explain… much the opposite of a torn signal.

And what about the software that you use for production?
My favourite daw is Bitwig Studio with its modulation system that allows for modulators on any VST plugin. Also, the touch screen implementation is the best on the market, and as I don’t want to look at a big fancy screen it works in my favour. I don’t use too many software synths or plugins and also here, I found it important to not overdo the possibilities and stay focused. so, I use the DMG Audio EQuilibrium EQ every time, most of the Sound Devices stuff, DRM Tools and Zynaptiq have incredible effects. on the synth side, I use cypher2, pigments, quanta, of course, u-he’s prophet emulations.

Is there a particular piece of gear that you’re just dying to get your hands on and do you think one day you’ll have it?
Honestly… not so much 😉 From time to time I’m happy about that… A Haken Audio Board is something I have had an eye on for quite some time. 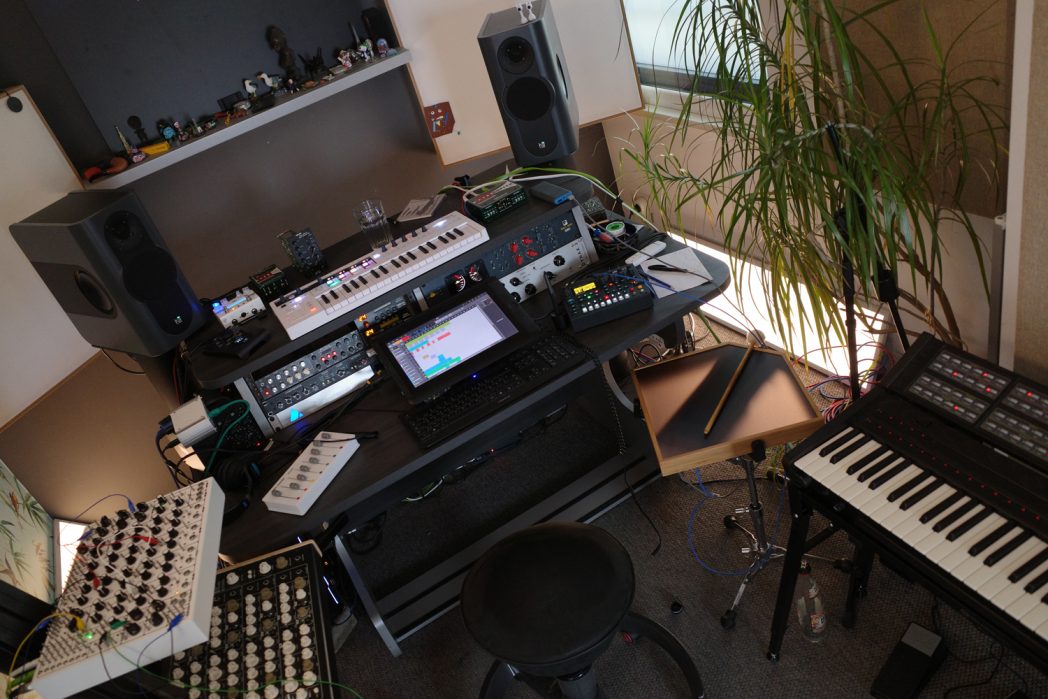 Can you please share some aspects of sound design in your work?
I mostly use combinations of different synthesis methods – an analog saw wave with one from the cypher software for example immediately sounds impressively good. An analogue percussion sound in combination with a found sound immediately makes a very unheard rhythm. This goes for many examples and on my new album – pretty much any sound is a combination of very different methods. Compressors that are able to glue sounds help a lot, that’s why I still have the api2500 even though I thought about selling it quite often… And then I didn’t, luckily 😉

Any particular new techniques that you tried out for your new album?
I recorded a lot of the living room from our studio, it’s the room where the gear reviews take place. Being quite big and thus having an audible reverb, many of the percussions and real recorded drum sounds have this room in it. The beautiful “tiny-creatures” chord progression on the third track “Celestophone” is recorded in that room with the c15 playing through the mighty space station.

What does your live setup look like, and what do you bring with you when you travel for an extensive tour?
Right now I have a blackbox and a bluebox with me, where the first plays the actual audio tracks or parts from it. This can be sampled into the octatrack and the microfreak, which runs through a reverb, can be played on top. The bluebox mixes everything together and spits the stereo sum into my “instant master chain” – a portable mastering device with lundahl transformers that helps me be loud and punchy so I don’t have to be afraid of the DJ playing before me.

What is the most important environmental aspect of your current workspace and what would be a particular element that you would improve on?
My studio is right in the middle of Hamburg’s Sternschanze, a district filled with tourists, young people who go out in one of its many, many bars, and the people that actually live there. When I have people visiting me it’s easy to impress them, but honestly – I would love a view into the green and a wide visual axis for my eyes to relax in between. 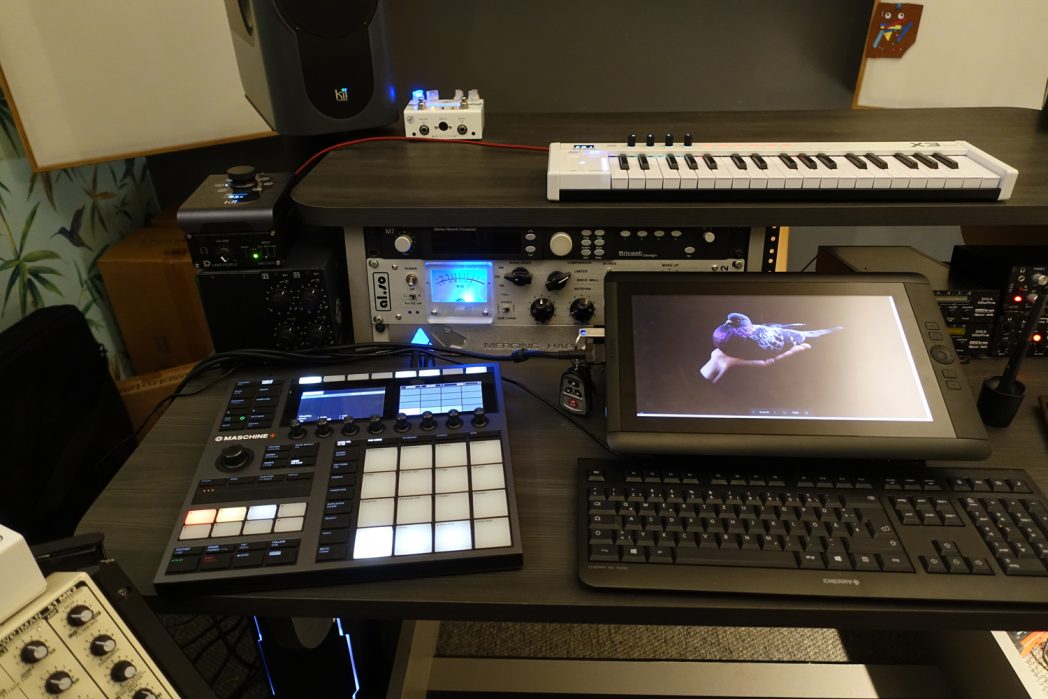 What can you tell us about your overall process of composition? How are the ideas born, where do they mature, and when do they finally see the light?
Usually, a track is born as a very small idea – this can be three chords that sound interesting to me, a little percussion combination in the op-1, or maybe even a hummed melody (like in the track “arc de triomph”). Sometimes it’s a little sound that I found somewhere or during a situation where I had one of my two boys with me in the woods and as he was making noises I accidentally caught them in my recording (track: “oma doris”). Sometimes the track is close to being finished but I miss something, so I just go through my recording folders and usually find what I need (track: “the hyve”). Sometimes I even combine two tracks that are very far in their progression but get stuck at one point and the combination of two separate ideas finalizes it (track: “die luft”, a little bit older). You see, there’s no strict formula here. I try not to force myself or become afraid of not finding what I need. Very often things just need a bit of time and a fresh mind. There is this glorious moment when I realize the track is done but I cannot find a rule as well. Also, usually, I need to fix the mixing or clean up some cuts and clicks afterward, so it can take another couple of hours after this.

After the piece is complete, how do you audition the results? What are your reactions to hearing your music in a different context, setting, or a sound system?
I usually let friends or my family have a listen, but I try not to make it something special – if it works by the way and if I feel comfortable with it, it’s all good. Having just another person having a listen in the studio is incredibly helpful as I usually feel the track from the eyes of the other listener and this is worth a lot.

What gets you inspired?
The tension between emotions and the practice of producing, with all its fancy tools and annoying overwhelming possibilities, is something that is usually embraced. Especially new gear triggers a lot of inspiration, but only the really great gear stays like that. Allow me to say it like this: the strain between flesh and technology is what I find very inspiring.