I feel like trying something a little bit different today and offering some of my views on a piece of software. In the past, I’ve covered a few audiophile-grade headphones, accessories, and even DACs under the Equipment Reviews column. I’ve even written an article on Digital Audio, Codecs, DACs, and Bluetooth out of frustration of having to explain why wireless streaming in a compressed Bluetooth format is sub-par. I think it’s also no secret that I dabble a bit in my solo-piano compositions and am currently exploring a modern classical and cinematic score. For my arrangements, I use a software-based DAW (Ableton), with a slew of VST instruments and plugins that process my analog synth and piano input. Recently I have been exploring the outer reaches of textural processing that some of the granular effects offer up, and today I wanted to share some words on such piece of software.

Ambient is a standalone processing module (it is not a VST, so it will not work within your DAW), created by Niccolò Granieri and Christopher Hipgrave and offered by Adiobulb. Yes, it’s the very very same Audiobulb Records, operated by David Newman, which brought us releases by Porya Hatami, Wil Bolton, and Autistici himself, among the many. It’s always interesting to see the labels and the artists offer up a custom piece of software that they create and use themselves, so I happily jumped at the opportunity to play around with the module. For the record, it was I, who reached out to Newman directly and asked to test-drive Ambient; therefore, this is not a paid endorsement (just like all of the words on Headphone Commute site). 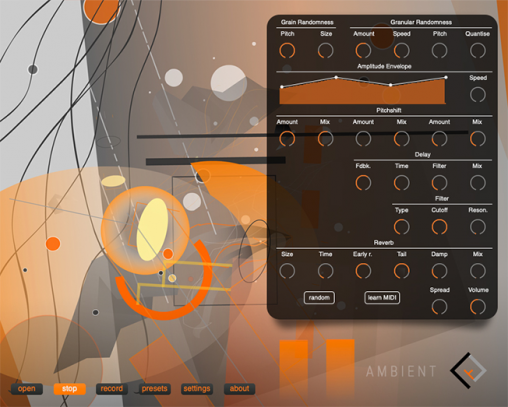 Like with any software, I don’t read the manual [this is sometimes a mistake], so upon a quick unzip into a Windows folder, I jumped right in and launched the executable (no other install was required). I had some issues with the audio (it was off by default, and I had to play around to get the right driver – er, read that manual!). I finally figured it out, opened a WAV of a piano chord I have saved in the past, turned up the volume, and hit the “Random” button – my favorite of “presets”. My sounds came out de-tuned, stretched out, and barely recognizable at all. After I played around with the grain size, amount, pitch, and sample speed, I’ve hit the record button, which began bouncing precisely what was playing out of my speakers into a destination WAV.

Audiobulb is all about exploratory sounds. With this aesthetic central to our philosophy, AMBIENT was designed to throw in some uncertainty. It’s a tool best used experientially – adjusting parameters and making artistic decisions about the sound.

The bottom portion of this software contains a few basic time-based effects, like delay and reverb, the controls of which should be already familiar to any electronic musician. There is also a filter section that you can manually set between many various types, but, interestingly enough, it sits between the delay and reverb in the signal chain (so when you play with the cutoff frequency, you’re applying it on the delayed output and then it feeds into the reverb). If you want to use your favorite delay or reverb, you can quickly turn down the mix knob the embedded effects, and bounce the output totally dry for further processing. Still, I did find these rich enough to contribute to the newly “synthesized” sound. They went along nicely with that spacial feel I was going for.

You can easily spend hours with this software, loading your very own sounds, randomizing the settings, tweaking the digital knobs, and drenching the output in reverb, to produce genuinely ambient-sounding pads, textures, and other effects, which are especially interesting since the result will fit in very nicely with your final piece that utilizes both, the original and the twisted output. Since we’re working with granular sampling here, the individual snapshots of the original are often pitched up or down to create rich layers of sound. The software can learn the MIDI signals so that you can tweak the knobs with your favorite controller, but, because it’s not a plugin, you cannot automate any of the parameters in your favorite DAW. So you are limited by the sound-sculpting functionality of this standalone and are then at the mercy of the final capture to bring in the textures into your final piece. But… limitations are a good thing, right?

A slam dunk for only £20 – a price of your Starbucks frappuccino!