Today I want to share with you some thoughts on the latest synthesizer module from the French Mutable Instruments manufacturer, called Beads. There are two quick disclaimers that I want to throw in before I dive into the details of this fantastic texture synthesizer. First, the one and only person behind the company, Émilie Gillet, had shipped over the module to me before it was released so that I can play with it and form an unbiased opinion, but, as usual, these words are entirely my own. And second, I’ll admit, I’ve never had the chance to really play with the module’s apparent predecessor, called Clouds (even though it is available to try as software in VCV Rack), and so the following review is only formed on Beads, uncoloured, if I may say so, of the pros and cons, compares and contrasts, of flaws addressed, or properties improved. So, if, like me, you haven’t played with Clouds, or if this modular synthesizer business is completely new to you, don’t fear and read along – this writeup is for you!

But, just in case you do own Clouds and want to understand a high-level difference between these modules, here’s what Mutable Instruments has to say about that:

Beads is a reinvention of Mutable Instruments’ Clouds. The concept is the same, live granular processing of an incoming audio signal, and the labels on the panel remain familiar. The similarities stop here. The hardware and software have been redesigned from the ground up, with several goals in mind: a crisper and broader sound palette, more control, better playability, and direct access to exciting new features.

So what exactly is this module, and how can you benefit from it in your studio and music production? On the surface, Beads is a granular audio processor – that is, it works with the sound, which is fed via an incoming audio signal and produces a time-based effect with its fragments. Dig deeper into its various properties and modulations, and Beads quickly becomes a much-desired segment in the arsenal of modules to produce complex textures and granular soundscapes to enrich existing source sound or create a brand new one. So yes, even if you don’t have a growing monster of a skiff or favour the virtual analogue synthesizers in your studio, you can use Beads in your signal path to process any audio input. But Beads is also a granular wavetable synth! In other words, it produces sound on its own! I’ll dive into this later, but first, let’s understand exactly how it works. 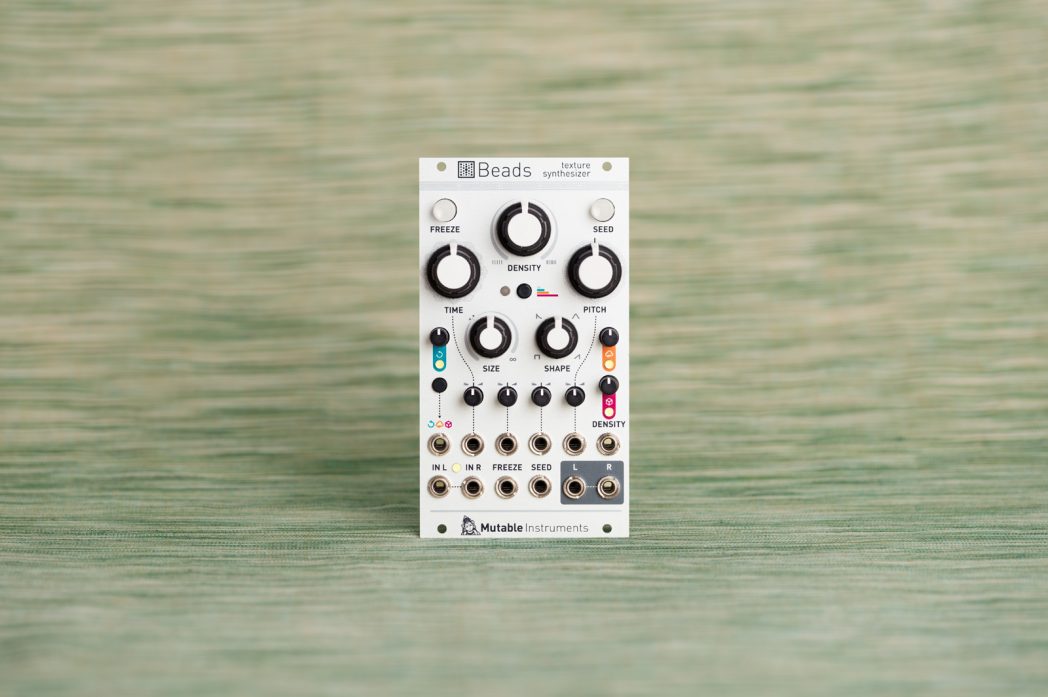 Although it’s always fun to jump into a new module and try to figure out how it works by simply twiddling all of its knobs, you should at least begin by understanding all of its concepts. I’ve spent some time with Beads and must confess – it can quickly “get away” from you (and sometimes that’s a good thing). But if you fully grasp the following basics, you should be able to harness its full potential. So… Imagine a loop made out of magnetic tape (yes, that tape from a cassette or, more appropriately, a reel-to-reel). There are at least two heads positioned on the unit – the “play” and the “record” (well, there’s also the “erase”, but it’s irrelevant for this induction). This tape is of fixed length, and so the faster it plays, the better will be quality of sound, but it will also shorten its available time. In the very simple setup, imagine this tape being continuously recorded on, and when it approaches a “play” head, the sound is heard. Now imagine that you have control over 30 of these play heads on this tape loop! And you can decide when and where to position them, how long they stay, how loud they play, and whether or not they can move in any direction! Of course, in Beads, there is no tape – the module is in the digital domain, and all of the audio is stored in the recording buffer. And so, to discuss its granular processing capabilities, from here on out, we will refer to each “play” head as a grain.

At this point, if I begin explaining every possible parameter of Beads in excruciating detail, this article will quickly turn into a manual itself, which you can read yourself right here. You can also spend three-quarters of an hour with DivKid, who made this Ultimate Guide, to what he labels as “Clouds v2,” and hear the output of the module (which is always better than just reading words). Instead, let me cover the very basics, including some very interesting usages and features. First, let’s look at the creation of each grain. This can be controlled either by manually triggering the SEED button, a continuous generation via an internal clock, an external clock (with a clock divider), or a CV gate patched into a SEED input. Here, the DENSITY knob serves a dual purpose – it controls the frequency of the grain creation (approaching audio rates) or probability of the random generation. You can also FREEZE the audio recording (the buffer is even backed up onto internal storage), and now you can “scrub”  the audio with generated grains. It’s important to point out that at audio rates and very tiny grain size, Beads will produce that granular synth sound, which can be “played” by patching a 1V/oct signal into the PITCH.

Once the grain is seeded, its parameters are determined by four independent attributes (which all can be controlled via CV). The TIME specifies the position within the recorded buffer (or in our tape analogy, the position of the “play” head away from the “record” head); the SIZE is the duration of the grain (or how long it stays playing on the tape), including the reverse playback; the SHAPE is your basic amplitude envelope, morphing among simple attack and decay combinations; the PITCH is the transposition of the “note” (or the velocity at which the “play” head “travels” across the tape). So with these four controls, you can specify the attributes of each grain at the moment of its creation. The typical attenuators, which you can find on most modules, are here also randomizers. That is, in addition to controlling the amount of external CV modulation, they also can randomize the values within the range. And if no cables are patched in, it uses an internal built-in randomization and spread out the distribution of whatever parameter you choose. If you don’t want randomization, be sure that all these pots are straight at 12 o’clock! 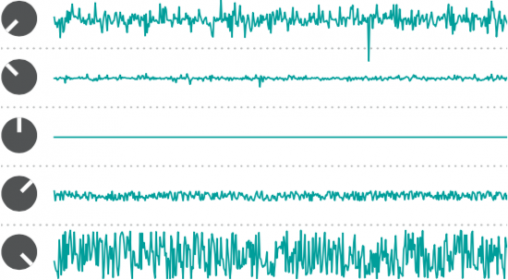 In terms of audio quality processing, Beads has four settings for your mono or stereo input, with various rates of sampling and resolution, going down to 8-bit “Scorched cassette” mode, where it also emulates the “wow” and “flutter” of the tape machine. There is also a global reverb (applied post dry/wet balance) which is “modelled on the acoustics of Thoreau’s cabin, or of a strip-mall spa“. The quality of the reverb does change with the selected resolution, but you can’t change the type of reverb or any of its other settings. I’m sure, however, that with Mutable Instruments’ open-source approach to hardware design and the code that drives the module, someone from the community will contribute to the firmware for further modulation with some archaic combination of knobs and buttons. Let’s not forget the feedback knob, where the output is fed back into the processing chain, further affected by the buffer’s rate and resolution.

I briefly mentioned the FREEZE option when discussing the grain generation, but there is a whole world of possibilities just in this mode, where the recording of the signal is stopped, and you’re essentially just playing with the sound stored in the buffer. So imagine you have recorded a drumbeat on this loop. With the SIZE knob set to an amount where you can hear the hit of each kick, snare, or hi-hat; and the density at twelve o’clock so that it produces only one grain when you trigger the SEED; you can then use the TIME knob to control the position from the buffer where it is played, thereby playing individual portions of the recorded buffer and their single drum hits! It’s fun to turn the TIME knob by hand, but you can also use CV to trigger and move to any position at some very high rates, essentially glitching the rhythm and beat slicing away! I used Mutable Instruments’ Marbles modules’ t3 output to trigger the SEED and the X2 output for TIME input! Here – I even made a TikTok (don’t laugh, I use it as my patch storage).

There is also a whole other mode for using Beads as a delay effect. This is where you turn the SIZE knob to ∞ thereby leaving only a single “play” head on the tape, active forever, just like on a reel-to-reel. In this mode, the DENSITY knob controls either an evenly or arbitrary spaced tap delay, which also approaches audio rates where it becomes to sound more like a flange or a comb-filter effect. As you may have already guessed, with a clocked input, you can control the delay time relative to the rhythm, whereby the DENSITY knob will subdivide the tempo. As with my example above, with the FREEZE enabled, you can do more sample slicing here. The only difference is in the DELAY mode is that you only have one repeating grain. In this mode, the PITCH knob also applies a “classic rotary-head pitch-shifting effect”. Don’t forget to utilize the attenurandomizers here, which are supplied internally by a slow random LFO; or reduce the recording quality for some really long lo-fi delays! Plenty to explore!

Finally, as promised at the beginning of this article, I want to cover the Beads‘ granular wavetable synth capabilities because, yes, as a special bonus, if all of the above is not enough, Beads can be used as its very own VCO. Left unpatched for ten seconds with no incoming audio signal, Beads begins producing its own! And it’s not just a single type of tone! It uses a collection of internally stored wavetables (8 of them, borrowed from Plaits), which you can, of course, scan and morph across with the TIME knob. Select the bank with the feedback knob, patch in a 1V/oct into the pitch, and either play Beads as its own synth voice or, after turning the dry/wet knob all the way right, begin granulating generated tone! And before you ask for even more wavetables, go ahead and record your own and FREEZE the buffer.

Alright, I think I’ve covered the basic functionality of this module. As you can imagine, with the various combination of settings, you can create a patch for various time-based effects, such as delay, shimmer, flanger, chorus, phaser, pitch shifter, glitch and beat slicer, including Karplus Strong string synthesizer and even a time stretcher. With many internally routed signals for modulation and randomization, you don’t even need additional LFOs or envelopes. You can easily use Beads as a standalone processor for your other synths, guitar, voice, and of course, a texture synthesizer! I don’t remember the last time I had this much fun with a module! Oh wait, yes, I do – it was the Mutable Instruments Marbles, which continues to be always present in my arsenal! Now I’m only happy to add Beads to pretty much every single patch I end up designing, with its stereo out almost permanently plugged into the final output!