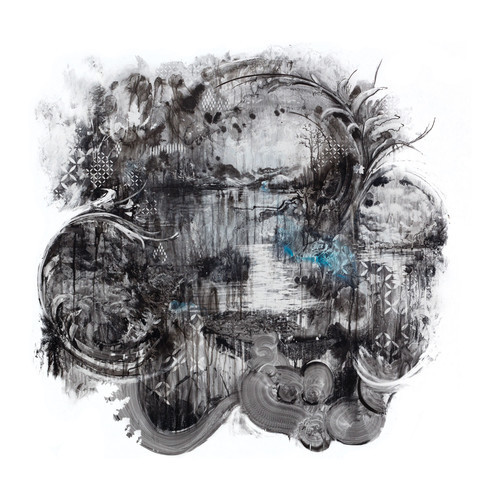 I bet that some of you are occasionally wondering: with all this music that I go through (perhaps a dozen or more albums per week) how can I possibly still enjoy it? Well, I’m happy to report that I still derive an immense pleasure from the experience of closer listening and further sharing via Headphone Commute. If anything, I’ve become even more intimate with the sounds. It takes me numerous listens of each album before I actually sit down and recommend it. My relationship with music has slowly turned into a one way conversation with the person behind it. And some times that conversation feeds back through these simple words. It is the least that I can do to thank the artist in return. These individual entries on albums that have served as a soundtrack to my daily life are as much for you as they are for me. It’s something that I reflect upon on more than one occasion.

Enter Lubomyr Melnyk, a Ukrainian composer and pianist who is now in his mid 60s, credited with pioneering “Continuous Music” – a process of fast note series drowned in a sustain pedal, creating ambient-like textures, harmonic overtones, and beautifully dense hues in this “tapestry of sound”. His biographical profile claims Melnyk to hold the world record for the fastest pianist – “sustaining speeds of over 19.5 notes per second in each hand simultaneously,” as well as the world record in the most number of notes played in one hour, a total of 93,650 individual notes in exactly 60 minutes. This remarkable technique involves an incredible physical and mental control which is “unprecedented in the history of the piano“. To say that this music is hypnotic is an understatement. To label it ‘transcendental’ is a little bit closer.

“Melnyk has shown a remarkable devotion to the instrument, always striving to discover new ways of composing music in the continuous mode. His focus is on the actual sound of the piano as much as the harmonies and melodies of the music. Using rapid and complex note patterns, Lubomyr’s virtuoso piano technique forms overtones that blend, collide or even create new melodies in rare moments, and thereby shape the composition beyond its original form.”

I begin by paying attention to the pianist’s audible fingers on the keys [expertly mastered by the one and only Nils Frahm], and the slowly building arpeggios of notes, only to awake five minutes later into the same piece when Peter Broderick‘s voice suddenly breaks through the opaque soundscape “with pockets of light / chasing the night.” All of a sudden the nineteen-minute track feels short and I never want this melody to end. Broderick later appears on his violin, but by then I am transfixed by the music, suspended in air between the tiny moments of time. Between the hammers and the strings. Between the inward breath and outward. And time stands still…

Although Melnyk’s discography goes back to 1979, it is with the support of Erased Tapes that this amazing artist is first introduced to our ears. With numerous self-released albums, on his very own Bandura Records, Melnyk is quickly gaining recognition among his contemporaries and fans. Important Records has already snatched a collaboration between James Blackshaw and Lubomyr Melnyk, titled The Watchers (2013), a live improvisation between to artists recorded in January of 2012. Perhaps the only thing that can top this recorded music is an experience of watching Melnyk live – something I’m really looking forward to witnessing one day! Highly recommended!