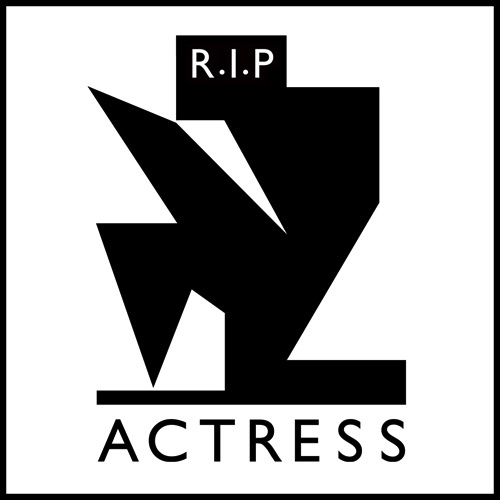 Going into the new album by Actress with certain expectations is a mistake. After Darren J. Cunningham‘s release on Honest Jon’s Records, Splazsh (2010), one may be predisposed to want to hear even more experimental beats paired with, what the current music scene throws under an umbrella term, bass music. Instead, the mysteriously titled third full-length release, R.I.P, offers an almost beatless series of vignettes and possible studies of truly experimental nature. It’s as if Cunningham turned off the beats on purpose. But don’t misinterpret that last statement. The rhythm is still there, lurking just beneath the lo-fi subterranean grimy techno pulse. But the gaping dark hole left by the [seemingly] missing kick drum is sucking in all of the remaining sound, with a gated dynamic thump. The fifteen pieces on the album (ranging from 30+ seconds to 6 minutes in length) all carry a murky atmosphere of slowly molten rubber, as the lazily morphing samples drip and burn through the foundation of each track.

R.I.P is clearly a listening album. One in which you can lose yourself completely, among the psychedelic passageways and semi-liquid builds. The fabric of the structure breathes and sighs, gasping at the organic matter surrounding its boundaries. The induced experience has a potent opiate feel, as your mind struggles to stay focused on the imagined and reality. Inspired by John Milton‘s epic 17th century poem, ‘Paradise Lost’, concerning the story of the Fall of Man (you know, the one with Adam and Eve, the fallen angel Satan, and the expulsion from the Garden of Eden), Actress explores themes of life, death, and religion. These pseudo-concepts are probed through track titles like “Holy Water”, “Serpent”, “Tree of Knowledge”, “Caves Of Paradise” and “The Lord’s Graffiti”. But don’t let these prospects turn you off – if you’re religion-averse, forget about the titles and simply enjoy.

“Right from Hazyville, Actress’s music has been deeply marked by London’s rave music heritage. But after the angular dynamics of Splazsh, R.I.P heads out into deep space. The rhythms and pulses are smudged or blurred, or are hinted at by their absence. 2-step garage is collided into gamelan, and freeform interludes explore microtonal spaces and imagined string instruments.”

With R.I.P, Cunningham moves even further into the electronic experimental arena, dominated by the likes of sonic architects like Pan Sonic, Oval, Andy Stott, Oneohtrix Point Never, and Demdike Stare. I managed to miss Actress’ performance at MUTEK last year, so I’ll have to make up for my mistake in a few weeks, when he’ll be playing live at Decibel Festival‘s XLR8R Showcase on Friday night, along with Teengirl Fantasy, Gulls, and Shawn Reynaldo. Fans of “perpetually-in-flux-adroit-bass-music” will be delighted with this new direction in the world of post-Burial, post-Zomby, and post-Shed sound. For more experimental beats, be sure to pick up Actress’ debut, Hazyville (2008), released on his very own, Werk Discs.