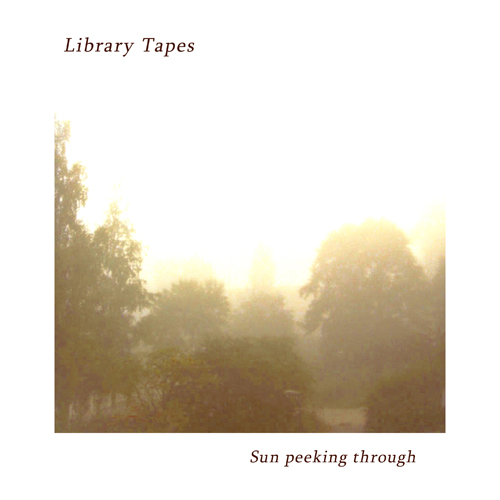 Watching the world slowly destroy itself requires a certain kind of soundtrack. A bit melancholic, a little feeble, yet somehow serene. This music plays on, as the news of the day scroll by: fires, scandals, murders, and wars. One of the ancient Chinese proverbs, and actually a curse, states – “may you live in interesting times”. It is the second of the three curses in severity, following the one which proclaims: “may you find what you are looking for.” But staying detached from the bombardment of negative information is not something I can do with ease. What I can do instead, is put on my headphones. This is where that soundtrack comes in. Neutral in tone, major in scale, and soft in its texture, the latest release by Library Tapes is the today’s selection for my headphone commute. Nevermind all that unbearable news of insanity which feels like its going to suffocate me with its dark toxic cloud. I’ve got my music – and the Sun Peeking Through.

David Wenngren is not a stranger to the serene modern classical genre, composing gentle piano pieces, which reflect the sun, the summer, and the skies, for over seven years now. I’ve been a big fan Wenngren’s work since his debut, Alone In The Bright Lights Of A Shattered Life (Resonant, 2005), and have especially come to love this artist through his sixth studio album, A Summer Beneath The Trees (Make Mine Music, 2008). In January of the same year, this Swedish pianist launched his own label, Auetic, on which we see this latest album released once again. In the past couple of years, Wenngren took more to collaborating with other artists. We watched him play with Nils Frahm Live At NBI (Sonic Pieces, 2008), work with Danny Norbury on Le Lendemain‘s Fires (Home Normal, 2009), and pair with Kane Ikin on Strangers (Kesh, 2012). For his eighth studio release as Library Tapes, Wenngren invites Julia Kent, Sarah Kemp and Danny Norbury to contribute the solo string sections to his blissed out ambient tracks.

Once again we find Wenngren behind the piano, playing soft and tranquil chords over the poised and placid strings. And it’s just these two instruments (well, really three – piano, cello, and violin), that conceive short, acoustic, meditative pieces within a single harmonized tonality. Doused in reverb and lo-fi stereo field manipulation, the music swirls in the vapors of hot summer haze, damp lazy clouds and dazed murky sun. As usual, the piano and the strings work very well together, but in the hands of these talented musicians they do so quite effortlessly, as an extension of themselves. The album title, and the titles of the ten tracks, hint at the changes of seasons, the passing and going, as this virtual and physical world that we live in continues to spin. Blending elements of minimal ambiance (ala 12k output) and organic classicism (ala Sonic Pieces catalog), the album perfectly fits among my favorite releases of the year, and is indeed a contender for one of the best. I can never have enough of this music – so please, please don’t stop! Recommended for fans of the above mentioned artists, as well as Goldmund, Peter Broderick, Eluvium, Greg Haines, A Winged Victory For The Sullen and From The Mouth Of The Sun.

Be sure to read our latest Interview with Library Tapes