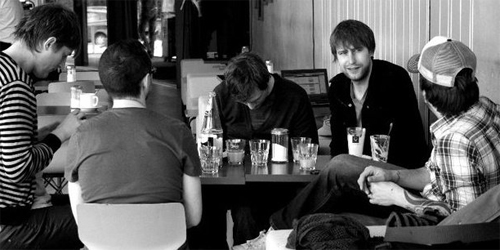 I always wanted to know, where does the name of your band come from?
Dunk: We get asked this a lot, we always have. We always used to tell a pack of lies and make up stupid explanations behind the meaning of the band name. But I guess we’ve simply got tired trying to think of new stories… its really hard to explain the actual meaning behind the name, other than the fact its personally related to myself and that it involves a medical condition that i suffer from. buy me a drink at Swingfest and maybe I’ll elaborate.

I understand that you began recording the follow up Repetitions. How is it going?
Dunk: Since finishing Repetitions I think we’ve entered the busiest recording period for Blueneck that we’ve ever experienced. I initially was working on a couple of film scores, which then inspired me to elaborate and use some of the ideas to form an instrumental record. I’ve been working closely with Mat Sampson (who produced Reptitions) and there’s a lot of ambiance and experimentation throughout. Rich and Ben have also been involved in helping pull things together, especially with the louder moments on the record. I’d have to admit it’s been a very self indulgent recording for myself personally – probably why I’ve enjoyed it so much! The record is really close to completion now and will be available around September.

We have also been working on the follow up album to Repetitions. We’re working in a vastly different way to the other albums – a lot of the record has already been written and there are demo versions for a majority of the tracks. Due to the fact that geographically we find it hard to get together, its been a case of me sending Rich ideas over the internet, then he’ll add ideas and send back to me , with the others then adding their own input or ideas. I think it’s fair to say that we’re exploring other avenues for Blueneck with this next album – its quite different to the previous records which im aware will probably upset a few hardcore fans. Having said that, I think that myself and Rich in particular are extremely excited about this next record and I think we’re both firm beleivers of a band needing to explore other areas to avoid becoming stagnant.

How does your live performance differ from your studio work?
Rich: There’s a big difference. Recently, when we’ve been preparing for recording we’re most often working separately, firing ideas back and forth on email, with Dunk trying to shepherd ideas into a coherent whole. When we’re in the studio Dunk often works on his own, or other band members when they’re available. The songs take shape from a layering process, which is exciting because a song can start out somewhere and end up somewhere completely different. However for the live performance side of things we work much more as a cohesive – almost democratic – unit. We take the recorded versions and work out how they can be reproduced or reintepreted that works for a live setting (and is playable between five guys). Inevitably, and happily (for me) songs start getting more guitar focused and/or heavier.

I’ve drawn many parallels in attempting to describe your unique sound. How would you explain your music to my ninety year old uncle?
Rich: Dramatic, melancholy, cinematic. With a vocalist who’s the gloomy male equivalent of Edith Piaf!

Who writes all of the lyrics for Blueneck songs?
Rich: Dunk. He’s like Elton John and Bernie Taupin rolled into one! I think that makes the rest of us David Furnish.
Dunk: I’m not sure if i approve of being likened to Elton John!!

What music inspires you?
Rich: Too, too much. Here’s what on rotation on my Spotify playlist recently: Jon Hopkins’ “Insides”, Orbital’s “Wonky”, Cliff Martinez’ “Contagion” soundtrack, Gravenhurst’s “The Ghost in Daylight”, My Bloody Valentine’s “Loveless” and “Para” by Calexico.
Dunk: my musical preferences tend to change from week to week, but lately I’ve been enjoying M83, The Antlers, Phoenix, Why? Beach House, Cut Copy, Mew and Feist. music with a strong melody is especially important to me and i’m often finding inspiration in a lot of music, even if its completely different to the sound of Blueneck.