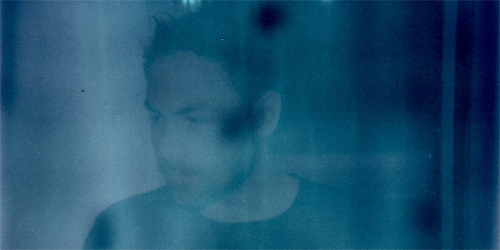 After your work with Paul Fiocco on Solo Andata, what prompted you to produce a solo release?
It wasn’t so much that anything prompted me, I don’t think it was even a conscious decision, I’m constantly writing but generally not towards anything specific though. Some things end up as beginnings to Solo Andata songs, other’s evolve in different directions altogether. Specifically with Contrail, I’d just started writing with a purposefully minimal setup that was more of a throw back to when I started making music with tape machines, guitars and synths, kind of revelling in the noise and imperfectness of the medium whilst getting away from the precision of purely writing in a computer. Eventually I had an EP’s worth of material which I sent to Taylor (12k) in an email saying something cheeky like “I think this would make a great EP and sound awesome on vinyl”.

What analogue equipment did you use on Contrail? Was the computer used at all?
If I had the facilities I would love to work completely outside of computers, but that dream is a way away. For Contrail the main setup was an old miniKorg 700, my first guitar – a worn out Telecaster copy with faulty pickups, a no brand buzzy/noisy bass and some effects pedals (delay’s, octave, echo) all fed into a Tascam M-30 mixer into a Akai 4000ds reel to reel with one very worn out and overly used reel cut as a tape loop. Then lot’s of feeding the signal back and forth through the mixer and tape before it was recorded into the computer to drench in reverb, add some more sounds, edit and mix. For the most part though as it’s heard on the record is how it was laid down to tape.

How did the work on Strangers come into being?
I think I approached David actually after hearing Murrilin Lane (12k). I wasn’t really into his Library Tapes work so much but I thought Murrilin Lane was a fantastic, dirty, soulful record, and I sent him an email saying as much. That led to the swapping of some songs and sounds and I guess eventually we were working on a record. It all happened pretty quickly and with little conversation.

So did you actually ever meet David Wenngren face to face?
Not yet. Not even on Skype or phone. Just email.

What was the process by which the two of you worked on the album?
We each had a few unfinished sketches or long instrument recordings that we’d pass back and forth. Some were more finished than others, Veil and Drifter I’d pretty much already written, it just took David’s new perspective to flip them a little and get the spark going to finish them off. Strings was a string section recording David had made that I cut and edited into something else entirely before passing it back, changing completely again and so on and so on. All of that resulted in 8 songs which we culled to 6 which we then got pretty meticulous with, layering more and more sounds, recording new parts etc etc. Just making them as big as we could. Around all of that were sporadic short emails between each other of suggested directions, ideas, things to try out. The whole process didn’t take long to finish and, for me anyway, felt very organic and natural. I doubt the record would have sounded the same though had we been working in the same space.

And how did the album end up on Kesh?
Actually Simon Scott posted on his twitter feed he was looking for the next Kesh release, we sent it to him about a minute later and not long after that he replied saying he’d listened to it on repeat for several hours wanted to release it. I’ve been a fan of Simon for a long time, so I was more than happy to go with Kesh.

What’s next in the queue for you? Will there be more Solo Andata releases?
I’m currently working with a new Melbourne label //This Thing// (thisthing.us/tt) on a release, probably on cassette, and I have about 2 albums worth of material I’m looking for a home for. Some of that comes from music I’ve written for a dance performance here in Melbourne in May as part of the Next Wave festival called Wintering, similar to Contrail, but inspired by and referencing Antarctica, the rest is more explorative of my love of early post-punk and electronic music, rhythm and obsolete formats. Paul Fiocco and I have been discussing the next Solo Andata record for a few months now, we’re actually about to start an intensive month long recording session in June. I’m very excited, It’s not going to be like anything we’ve recorded before. In a good way. Aside from that Solo Andata have a new song on the next Air Texture Vol II compilation and another new song we composed for Ryuichi Sakamoto’s Kizuna World project (kizunaworld.org). Hopefully they both come out before too long.