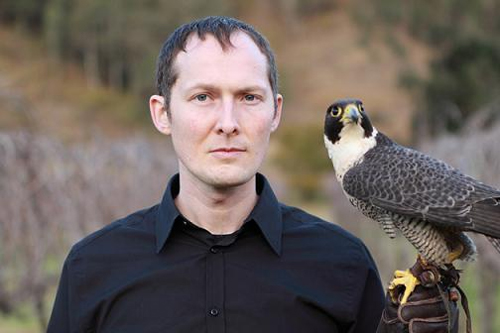 I’ve read about your discovery of The Peregrine book by J.A. Baker. Besides deriving inspiration for your album, would you recommend this book to your friends? And why?

To me The Peregrine represents a very unique approach to writing. A journalistic style, but one in which the author plays very little role. He is merely a conduit, and yet we still have a very clear impression of his understandings, interests and ultimately his obsession. It’s this that really struck me, as I suppose personally it’s what I aspire to with making work. I’m not interested in being the centre of the piece – rather I want to be this conduit, this focusing agent that brings together these elements and expresses them in a way that invites people to engage with the work in their own terms. I don’t want to tell people what to feel and when, but rather invite them to consider how it is they want to relate to the work.

I had the pleasure of introducing this book to Werner Herzog and he remarked it has a “quasi-religious transubstantiation” quality when Baker lapses from writing about the singular to the plural when speaking about his relationship to the bird. It’s so subtly powerful how he uses text to relate this, as if he is becoming the bird and they form some kind of all consuming union. This element is something I find profound about it.

Are you a bird lover yourself?

Yeah, flying that Peregrine was a fairly outstanding highlight of the past few years. I’ve always been impressed by birds – their ability to outshine us in so many aspects – manoeuvrability, speed, hearing range, volume and complexity of song and their communication. They’re an amazing species, one that taunts us with their freedom of flight. They also fascinate me because of the reality they inhabit… ours is such a basic understanding – we walk and what we see at head height is out definition of the world. If ever you stand on a roof or watch birds above a tree canopy you realise how much bigger their world is within a localized space. I think we have something to learn from that.

Have you read Baker’s other book, “The Hill of Summer”? Perhaps it will inspire another album?

I have – it’s actually just been republished which is great. Actually part of my original plan was to have the hill of summer as the flipside to the peregrine… it’s just that the peregrine grew so quickly into a full length work. I’m not sure if I will make a piece on the other text. It’s a different beast in a way, still an incredible read, but less focused in a sense, almost like a collection of shorter stories… still an utterly amazing read. And the fact that Baker made just two books, that flaws me… what a precise statement…

The Peregrine is incredibly frequency rich. Talk about the layering of sounds on the album. Any other production techniques you wish to share?

I guess for the record I wanted to capture the complexity of the environments Baker wrote about and the motion of the bird too. Early last year when I was on a field trip for Site Listening, I saw a Peregrine at Hay Point. I spent most of the afternoon watching it… it stooped and flew about riding the wind. The album was really in my mind then and I took that afternoon as something of an omen, as it had been quite a few years since I’d last seen a Peregrine. But watching that motion and the small shifts of the bird, that resulted in such considered movement made me think about the compositional and processing of the sounds. I wanted to mimic that subtle motion resulting in flight change. It was about single elements being consumed in larger spaces – like a bird in wind – the art is riding that wind and making sense of an utterly chaotic situation. I wanted to somehow bring that into the harmonic quality of the record.

Describe the physicality of sound in your compositions… When you play out live, how far do you push the system and what are some of the aspects of experiencing the album at loud volumes?

I think that studio practise and live performance are very different approaches. Interestingly the few concerts I’ve given for the peregrine has moved from utterly quite to incredibly loud… and it’s about that soaring shift. For me there’s two kinds of listening – one with the ears, a cerebral listening and the other with the body, a more visceral/tactile listening I think in concert that’s where these two can co-exist best. For home listening, even with a decent system it’s rare for the whole body to hear the record. I think that’s the power of live music and I do try to explore that with my work.

Do you have any art or video installations coming up?

Actually I do. I’m working a lot more sound artworks and installations at present. I have just completed a new work ‘Tiny Cosmos’  which is a series of photographs and a mixed media installation. There’s also a new project with Grouper called Slow Walkers which will take the form of a series of video installations, as well as an LP. It’s based on this idea of the zombie as post human, a kind of evolution of that phenomena in contemporary culture. I also have a series of other object based sound works including a new set of lathe cut LPs made from iterations of nothing. These works will be showing over the next year around the place.