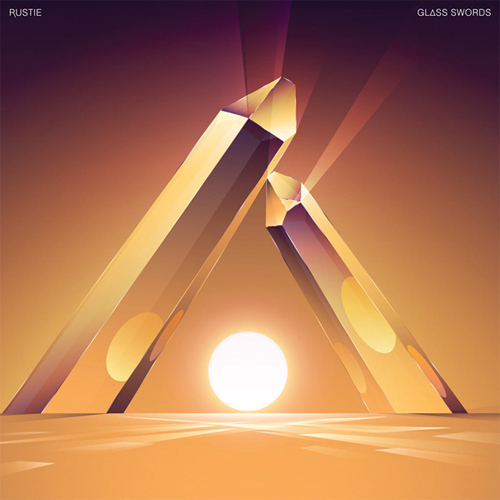 It seems like an awful long time since Rustie’s Jagz The Smack EP came out on Stuffrecords. Well, 4 years to be precise. Remembering to back then, his bass-heavy “aqua krunk” style of instrumental hip hop left chinstrokers unsure if this was dubstep or something similar. In 2008, I had the pleasure of seeing him and fellow Glaswegian wonky beat-maker Hudson Mohawke dj twice in Barcelona – playing mostly hip-hop with the odd bit of a wobble, but still getting everyone who was paying attention very excited indeed.

Jump forward to 2011 and the electronic musical landscape has changed considerably – HudMo’s Butter LP came out on Warp 2 years ago seemingly leaving Russ in the dust, and bass-based dance & wobble music has evolved at an exponential rate. Quite honestly, I don’t think I was the only person to wonder what had happened to Rustie (despite the odd random quality remix), so it was a great relief to see him finally step up and deliver on the promise of those early productions.

Glass Swords, like all the best electronic albums has one eye on the future, the other on the past, and has then fused both into a sound that somehow manages to sound nostalgic and future-looking in one contemporaneous shard – crystallizing the moment, you might say. Surprisingly for someone whose early works seemed quite moody, there’s a sense of unabashed joy and freedom that permeates each track – dayglo trance drum rolls and hands-in-the-air euphoric rave synths, which are gleefully thrown into the mix alongside what sounds like 1980′s hair metal guitar samples and an infinite play chest of toy percussion.

“[…] Rustie time travels for the cocaine-addled synthesizer washes and searing guitar tones of 1980’s pop, the cash-infused bombast of new-millennium R&B, the pit-of-your-stomach ecstasy high of the most classic rave memories and the bloodshot scowl of white-hot pirate radio broadcasts.”  -Warp Press Release

The sounds themselves are of a strangely fuzzy home-made quality, sounding like an energetic drummer trying to replicate an Essential Mix as he listens to it live on the radio. This is by no means a bad thing, but it does mean that there is something uniquely Rustic about the tracks here that would make them hard to blend into a DJ mix of otherwise polished-to-perfection dancefloor smashers. Whilst appropriating the templates of current musical vogues: dubstep, juke, techno, wobble hip hop, and so on, the album manages to sound like none of them at all, but something beamed down from another plane entirely.

The second track on the album, “Flash Back”, instantly reminded me of Vince DiCola’s synthy score for the 1980′s animated Transformers Movie and I suspect this isn’t coincidental.. a clonky retro-futuristic element is definitely there in the fabric of the music. Meanwhile, neck snapping tunes like “City Star” and “After Light” sound (unexpectedly) like something Afrika Bambaataa might have made, had he grown up on a diet of Irn Bru and fish suppers. It’s yet to be proven, but I suspect you could happily play this album from end to end over a compilation of 80′s sci-fi movies and it would fit perfectly…

Review by Orangewarrior, originally appearing on clockworkshorts.com. Republished with permission of the author.