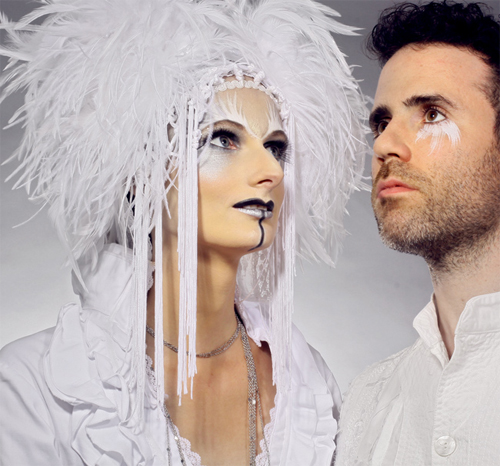 You have an impressive background in music composition, yet this is your first studio album. What inspired you to make this transition.

Akara is the culmination of a musical journey I’ve been on for about ten years. I have been obsessed with making a kind of otherworldy music of luminous beings for about that long, writing concert pieces with invented light-language and these kinds of fusion gamelan/Indian/I-don’t-know-where melodies. And indeed I made some studio recordings before, but I never made it to a whole album. Eventually I had to come to terms with the fact that instruments are great at some things, but can only approximate others (synth bass being a perfect example), and to really create the immersive soundscapes I was hearing in my head, I would need to mix instruments with synths. A lot of what I did in Akara seems obvious in retrospect but it actually took a very long time to figure out what this music wanted to be, and what the proper way would be to do it.

And then, on the other side, there was a lot of time that needed to be spent getting all the proper gear and software and learning production at the same level (or nearly so) as I had learned acoustic composition. When I first got the software Omnisphere, which, amongst its many features, allows you to use organic, acoustic soundsources in a really intelligent way as the basis for synthesis (turning, for example, a tuvvan throat singer into a bandpass analog synth like I do about two-thirds through Projection), I started crying because I knew I would finally be able to make the music I had dreamed of.

Tell us a little bit about Femke. How did you meet her and how did the project come together, bringing a decision to include her vocals on the album?

Well, the idea of the vocals on the album predated Femke. I had a very clear idea of wanting to create this otherworldly goddess energy presence, and had written a lot of the vocal parts already before I found her.

I met Femke via a craigslist ad and a very long process of listening to demos and auditions. I was looking for a particular “breathy, elfin” sound, and I went through a lot of singers to get to Femke. She’s an incredible musician (she plays guitar, piano, and accordeon), engineer, singer, songwriter, and while I don’t use half her talents in Akara, I’m really happy to have her on board. I went through 60 applicants for the singer spot of Akara, of whom I auditioned ten, of which maybe four or so were in any way possible, but Femke was very clearly the best of the bunch.

What’s interesting is that I almost didn’t audition her – she sent me her music, and I listened to it, and I thought “well, this girl is a fantastic songwriter and has a great voice, but I’m not sure it’s really what I want for Akara.” So I wrote her an email, telling her this, and asking whether she wanted to come over anyway. She came to the studio, asked me what kind of vocal sound I wanted, and after I told her, she said, “well, how about this?” and did a perfect take of the opening melody from The Far Shore. And then she asked me whether I would be able to provide her with sheet music of all the parts when she sang them in the studio – this to a classical composer for whom notating music is the default way of communicating with musicians – and I knew it would be a match made in heaven.

Who is the protagonist in Extradimensional Ethnography, and what is his/her story?

Well, I see the listener as the protagonist. You find yourself in another world, seeing rituals and dances and songs from beings from that world, not being able to fully understand what is going on at a surface level of meaning, but getting a deep, nonverbal sense of the communication and energy.

Listening to your aural dreamscapes, I can’t help but hear relationships with Shpongle, Shulman and maybe some Ott… Who are your influences and what inspires you in creating these sonic places?

Shpongle and Ott are definitely big influences on the sound of Akara. The biggest difference between Shpongle/Ott and myself is the dub influence: Akara is not about a dubified universe of reactions between echoy psychedelia and a deep bass; rather, the psychedelia/effects are more of a constant presence, a texture rather than a color or object. Also, for Akara, I am not interested in weirdness or wackiness per se as a category. Shpongle is more of a carnival – Akara is more of a temple, though there is some of each in both.

The question of what this music is is a good one, though. You call this music “psybient”, and I think, broadly speaking, it is. I think that what defines what a music *is* for us, more than anything, is the broad strokes way it tells a story, and the way that musical gestures are used. As much as this music is influenced by lots of things, it really does feel like electronica first. Somehow, it isn’t “an orchestra piece with a laptop,” but rather a “dance music album with an orchestra.” It’s interesting that there’s a distinct difference between the two objects and I think it is because the grammar of this music – the way it uses the bass drum, the way the phrases are arranged, the buildups and hits, what we expect it to do – are that of psybient/electronica/post-dubstep rather than of classical music.

Basically there are four main strands of music that flow into Akara: Western classical music, psychedelic electronic music, gamelan, and Indian music. The Western classical influences are the strange and unique Canadian composer from the 1980s, Claude Vivier, the minimalists Steve Reich and Phillip Glass, Classical music is what I started out by studying, gamelan and Indian music are what I studied later, and psychedelic electronic music is the world I am trying most to inhabit and learn from. And what unites the latter three musics (and makes them different from any form of Western classical) is that they have what are called colotomic structure, which is a way of saying that they are structured towards big downbeats: the sam of Indian classical, the gong of gamelan, and the big drop of dance music. And I’m trying to create that, too – a kind of giant celestial gamelan, a giant clockwork thing of beauty moving towards and inevitable arrival to a dimensional tipping point…

But it’s also important to single out Claude Vivier – it’s in his music, specifically the pieces Prologue Pour Un Marco Polo, Bouchara, Lonely Child, and the unfinished Glaubst du an die Unsterblichkeit der Seele – where he creates an alternate universe with different characters speaking invented language. His music is more ascetic, harder to approach than mine, but it is deeply, deeply mystical. And what’s interesting is that it only got that way for maybe two years – he was developing his voice, and then he came to a kind of crystalline spiritual clarity in his music – and then he was murdered. In any event, Vivier is kind of a counterpoint in my mind to Shpongle in terms of setting up a model for what Akara is.

I think this is the first psybient album (forgive the categorization once again) on which I heard a _lot_ of acoustic instruments. It almost sounds like you have put together a whole orchestra for the project. Tell us a little about all of the world instruments used and how this collaboration materialized.

Well, I do use the word “orchestra” to describe Akara, though when a classical orchestra plays my music it’s a whole lot more people. But there are still two violins, viola, cello, flute (doubling on alto flute and piccolo), french horn, harp, Indian mandolin, as well as some assorted percussion. What’s different about me than I would guess all other psybient producers is that I do have this classical training, so this music was created by writing all of it out. It’s all composed and notated – there’s a score! – which really results in a different kind of texture and development than the usual “sample phrases and rearrange them” technique favored by most producers. That said, I do know that I’m not the only producer who notates parts – Shpongle, Gaudi, and I would guess Emancipator also use notation in their music. But there are a few tricks of instrumental writing that I bring into the field that I think are pretty fresh.

The only exception to this way of working was my friend Noam, who plays the Indian mandolin. His parts were part-improvised, part composed by me, and we worked on them in the studio together.

What’s next for Akara, and what are you working on right now?

Mainly what I want to be next for Akara is just to play this music live, in lots of places, preferably with the full band. It’s been amazing to feel the response and energy that have come from playing this music for people and the next step for us in a lot of ways has to do with doing it a lot more. That said, the next thing we are going to do is a remix album. It will feature remixes by Jef Stott, Kaminanda, and Kalya Scintilla – three producers whose work I enjoy a lot! I’ve heard some early versions, and they are fantastic!

Also, I’m working on the next Akara album, which will probably be an EP. I’ve been working with some darker material – though the light is always there – and also working with some tracks and sounds with a little more bass – a little harder and more danceable. We’re also going to be adding accordeon to the instrumental mix for the next album. Femke is actually a virtuoso accordeon player, amongst her many talents. I had written most of the songs on the Extradimensional Ethnography before meeting Femke, but now with her in the band, I am so excited to let her do some of the other things that she does!