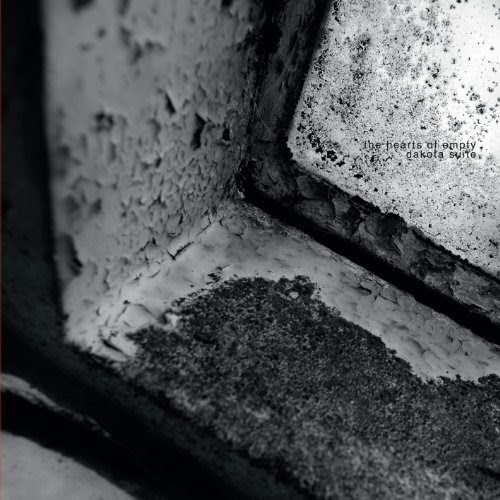 My face is wet and cold, fighting through the wind of my grouchy commute, but my mind is hazy and warm, gently nodding away to the rhythms of jazzy riffs in an underground cafe. There, the soft smoke rises up and mixes with the sweet aroma of freshly ground coffee, and the slightly spicy perfume. Someone smiles in the dark. The double bass pouts at the poetic piano, as the brushes lazily sweep the snare, and the rain picks up. This is the “late night smokey jazz” side of Dakota Suite, a UK three-member band (consisting of Chris Hooson, David Buxton and Richard Formb) with a deep discography. Mostly releasing on their German home label, Glitterhouse Records, the suite made its way over to Karaoke Kalk.

The tenth full length studio album (the band has been active since 1998!), The Hearts Of Empty, is meant to be a “counterpart” to The End Of Trying (Karaoke Kalk, 2009), which was originally intended to be a double disk release. “Whilst I was recording the music, the mournful hymnal like austerity of the piano and cello, I also heard a more stripped back jazz based piano record and a series of more driven pulses and arrangements,” says Chris Hooson. The album is full of nostalgic and memorable melodies that stay with the listeners days after initial listening, and beg for another rotation once more.

It is nearly impossible not to pin The Hearts of Empty as a jazzy album, yet it will find the ears of many modern-classical purveyors just as happy with delight. Be sure to also check out The Night Just Keeps Coming In (Navigator’s Yard, 2009), which is a remix project of The End Of Trying with contributions from pretty much every contemporary classical musician on the scene (like Hauschka, Peter Broderick, Arve Henricksen, Deaf Center and many others). Another great addition to my collection and a recommendation for yours…