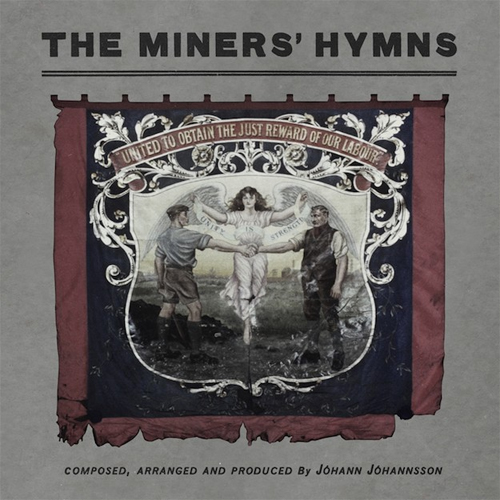 Jóhann Jóhannsson has been composing hymns pretty much throughout his career. They may not have been titled as such before, but elements of traditional requiem, imaginary folklore and musically devout ode have always been in his sound. From the celebrated Englabörn (Touch, 2002) to exploratory Virðulegu Forsetar (Touch, 2004)  to fantastically grandiose Fordlandia (4AD, 2008), Jóhannsson always examined and focused on a particular theme, deconstructing its underlying structure through multiple variation, sonic dissection, and instrument substitution. From one perspective, Jóhannsson’s music has been composed in the classical tradition of a symphony, with the substratum and its components mathematically arranged, intended to be consumed as a whole, in one sitting. From another view, the music of this Icelandic experimental, contemporary, and modern classical composer has been very cinematic in nature. So it’s not a big surprise to find him producing his next monumental soundtrack for The Miners’ Hymns.

What is surprising (and exciting) for this particular release, is that FatCat (after years of backing some of my favorite modern classical compositions by artists like Sylvain Chauveau, Max Richter, and Hauschka) has finally decided to sign Jóhannsson on to their 130701 imprint, completing its arsenal of commanding names in the modern classical community. With most of the label’s previous records focusing on strings and piano, this new entry in the catalogue will add predominantly brass-based compositions. With The Miners’ Hymns, FatCat continues to distinguish itself among the independents and is quickly becoming a powerhouse of impressive talent, leaving its fans and artists alike, anticipating its every massive move.

Now back to the album. The Miners’ Hymns, as mentioned above, is indeed a film score for a collaborative project based on the instinct mining industry in North East England. The second member of this collaboration is Bill Morrison – an American experimental and avant-garde filmmaker. The project was commissioned by Durham County Council for its Brass: Durham International Festival, incorporating the Durham Miners’ Gala – a large annual gathering celebrating the heritage of coal mining, and the regions traditional brass bands. With those two elements in mind, Morrison’s film showcases social, cultural, and political aspects of this community, while Jóhannsson paints the soundtrack of occasional dark despair, mixed with the elevated feeling of hope.

In the hands of this seasoned composer, the brass instruments proclaim the hymn, while the background organ cries its requiem. From Baroque phrases to measured space between silence and sound, The Miners’ Hymns soars over the landscape and history of Durham, ranging in mountainous dynamics, from quiet whisperings to thunderous blows.  Performed and recorded live at the Durham Cathedral, by a 16-piece brass ensemble, The Miners’ Hymns will surely stand the test of time with its lasting message, soul-drenching beauty, and powerful thrust.

Make sure you read Interview with Jóhann Jóhannsson