This installment of Sound Bytes, as the title suggests, features six full length albums [published in two parts] that I have recently enjoyed, covering guitar driven noise, dense drone, dark ambient and even black metal. It’s sunny outside, but I still feel a bit of doom approaching. What can I say? It’s that kind of day… In terms of sheer intensity, and physicality of sound that these pieces convey – you either get it, or you don’t. I’m not here to defend the genre or convince you otherwise. But if you want to experience it first hand, turn up the volume, and let your hair flap in the whirlpool of sound. 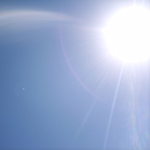 We begin our aural journey on a lighter side, with a three-piece UK band, Cut Iowa Network, with Tim Evans on the guitar, Adam Barringer on the bass, and Steve d’Enton on the drums. The trio collage expansive soundscapes, that are cut through with mid-tempo percussion, to create the second volume in their Projector Gunship Held trilogy. The first volume was released on Panic Arrest, while this follow-up comes out on a Champion Version. Both labels appear to be members of the Eat Sleep Repeat network. The group quotes Tarentel for the experimental instrumental influence, and Tangerine Dream for the “sprawling ambient dreamscapes”. At the core of the record is a definitive krautrock reference, with the drums making up the structure of the album, drenched in abstract textures of bass and effected guitar. The skilled percussion alone makes up a larger slice of the record, and in turn gives it an up-beat feel. And before I descend into the doom-drone-gloom territory, it’s worth mentioning another release from the folks at Eat Sleep Repeat, which is a 7″ EP from Eric Chenaux with two folksy tracks, Warm Weather and Le Vieux Favori 4. Check out Chenaux’s previous releases on Constellation records. I’m looking forward to the final installment in the Projector Gunship Held series… 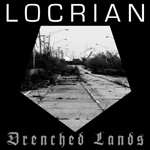 Although the prolific Chicago based Locrian duo, André Foisy and Terence Hannum, had quiet a few releases since Drenched Lands, I’m still enjoying this dense, drone heavy, massive album. Released on a Scottish drone/noise label, At War With False Noise and Small Doses in 2009, and later repressed by BloodLust!, Utech, and DeathSmile, Drenched Lands is a dark voyage into post-apocalyptic land of abandoned concrete highways and obsolete ruined structures. The inner desperation of desolate landscapes and overgrown wastelands is conveyed with howling vocals, growling guitars and power electronics, blending dark ambient and black metal into cacophony of thick layered sonic palette. With its narrative structure, the album “starts with a slow descent into a dark abyss, moving torturedly, gradually rediscovering the light, then leaving you where everything began – completely transformed”. Background distorted riffs are punctuated with foreground guitar strums in an epic buildup, appealing to cinematic soundtracks of deep caverns and cold cells. The last, 30-minute track, is a complete trip. If you dig this sound, be sure to also pick up Locrian’s Rain of Ashes (Fan Death, 2009) and their latest album, Territories (2010). 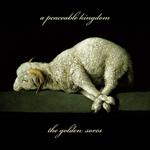 Kicking off with soaring guitars and mid-range background drone, The Golden Sores, open up their sophomore album, A Peaceable Kingdom. This is another release by the Chicago-based BloodLust! label, which has already put out numerous records by the above mentioned Locrian. Unlike the latter (also from Chicago), Christopher Miller and Steve Fors tend to create resonating reverberations mostly in the major key, physically abusing your ears to euphoric heights that can only be reached at higher volumes. A Peaceable Kingdom is an album without any percussion, composed entirely of vibrating strings and oscillating synths, smudged layer upon layer through effects chains and pedals until its density is viscous with blood slowly oozing somewhere from your cranium. These sounds, meshing between the incredibly beautiful and the insanely grotesque, create an atmosphere of lust and anguish, as only music can, in a single sonic onslaught. My favorite exercise is to keep raising the volume throughout the track, as my ears adjust to the levels, then hitting the stop button, absorbing the ringing silence with apparition and fumes of ghostly melodies, then hitting play again to get slapped with the noise. Be sure to pick up the duo’s debut release, Ashdod to Ekron , available from Drone Cowboy.