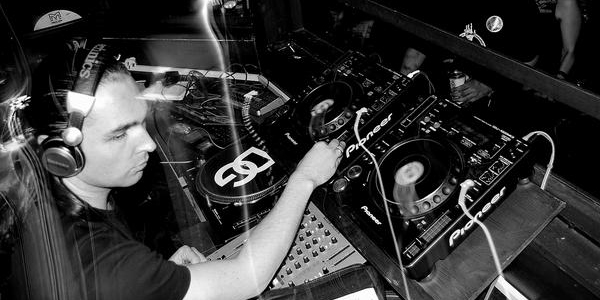 Can you describe your temporary departure from hardcore, how drum’n’bass was able to fill the void, and your current work with your/Eye-D’s hardcore label, Genosha?

Roughly 11 years ago, my first explorations into the world of drum ‘n’ bass were quite literal escapes from hardcore, which had been taken hostage by its glow stick variant. Concurrently, Jungle/Breakbeat was getting darker and this turned out to be very appealing.

Nowadays, I tend to simultaneously operate in both styles. Just as long as they are not associated with fluorescent flowers, contain pitched up pop choruses or feature staccato piano melodies that sound like they are being played by jesters with ADHD, I’m happy.

Working on “The Words Below” was never really a departure from hardcore as I prefer to have several projects going at a time. By allowing myself to work with multiple genres, it consequentially might make it harder to categorize my tracks. The blend of elements might not always be what listeners have come to expect. The freedom to experiment has enabled me to come a lot closer to the way I want my music to sound though. Every song I write, I consider part of a learning experience in which I am applying my previously attained knowledge and I am hoping to gain more. It is an interesting never ending process in which I strive to translate my ideas in such a way that they are perceived creative yet do not come across unnatural.

The reason we started Genosha Recordings was simply to have a higher level of creative control. Although we have a small roster of artists on the label now, it initially started off as an outlet for our own material and still fully represents the kind of hardcore we would like to hear. Once again, this music is a mixture – taking cues from drum ‘n’ bass, techno and idm.

Do you foresee mainly DJ Hidden material in your future, or is The Outside Agency due for an album?

I like to keep the releases I do as DJ Hidden and the ones we do as The Outside Agency balanced. Since not everyone is familiar with both, I think it’s the best way to keep everyone happy, including myself. Apart from the educational factor, writing music for these different projects also prevents me from having writer’s block. Currently, I have been broadening my musical horizon some more by occasionally focusing on my Semiomime project. Right now, I am writing a full length album which is the perfect output for some of the ideas that are hard to fit into tracks that often still require a certain connection to dancefloors.
The first Outside Agency album, Scenocide 101, was a collection of the tracks we had released on various Genosha 12” up till then. Its sequel, Scenocide 202, will essentially do the same thing and is scheduled for release in 2010.

Your list of allies is long. Who do you feel is doing the most valuable work in the musical realms you inhabit? What is Ad Noiseam doing right?

Naming either a specific artist or label as the key factor to any of the genres I mentioned before wouldn’t do justice to the many highly talented individuals and forward thinking labels I would have to ignore. I admire musicians who have their own identity and are capable of expressing themselves through their work. With regards to the labels I had the opportunity to work with, the ones I value most are the ones who respect their artists and support them by releasing their music. If I had to sum up the good qualities a label should have, Ad Noiseam would be listed as one of few who would fit a special “all of the above” section. It has always been a pleasure working with them and I value their honesty, individuality and overall good taste in a wide selection of different kinds of music. I consider most of their releases of very high quality and I’m proud I was given the ability to contribute to their discography. They have always given me complete creative control enabling me to release two full-length albums which turned out exactly the way I had envisioned them.

As early as “Empty Streets” I knew you were a force to be reckoned with. Is there a chance your earlier DJ Hidden tracks and remixes will be collected?

Apart from Scenocide 202, which collects all recent tracks Eye-D and I did on Genosha, there are no direct plans to release a album like this with my previous DJ Hidden material. I am however planning on making several of the older tracks available for download on various portals, remastered if necessary.

Maybe someday I will release a collection of my best tracks on CD but right now, I prefer to focus on creating new ones. As with the music on The Words Below, I often consider my songs tales and I have a lot more to tell…

See also review of DJ Hidden’s The Words Below