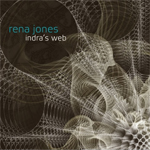 It’s not so uncommon to see classically trained pianists turn to electronic music production. After all, it’s not a huge stretch from the piano to a midi controller keyboard. It’s considerably rarer to find producers who are actually cellists and violinists by training. But Rena Jones is certainly not your garden variety producer. She’s a multi-instrumentalist and sound engineer with more than 20 years of classical violin study and 12 years of the cello behind her. That background is reflected in Indra’s Web, her fourth solo album and the first on her newly established label, Cartesian Binary Recordings.

Indra’s Web weaves together weighty downtempo electronica with swooning modern classical, with Jones backed up on more than half of the album by three string players from the New Millennium Orchestra. Jones is also credited with vocals, mixing, programming and Rhodes, and the album also features a live drummer, a clarinetist and a vocalist.

In addition to the graceful strings, the album is marked by a hefty bottom end and gently skittering percussion as well as the intricate and spellbinding compositions, which do full justice to the album’s name. Indra’s Web is a metaphor found in Buddhism and Hinduism for “the structure of reality, representing the interconnectedness and interdependency of all things, describing a rich and diverse universe where infinitely repeated mutual relations exist between all of its elements and entities.”

That’s as good of a way as any to describe the music. It immediately grabs hold of you and sucks you in but the songs are not so easily digested on the first listen. They’re subtle and, like elaborate labyrinths, they take time to reveal themselves. You need to explore the nooks and crannies before you can find your way out. But they’re beautiful, enchanted labyrinths, green and flowery, and time moves in hazy slow motion inside of them.

I will resist the urge to discuss individual songs (except to say that the one-two punch of On the Drift and Point of Existence is a knockout). Suffice it to say that Indra’s Web is an extremely rewarding album and unique in the way it combines beat-driven electronic music with classical moods. It’s seamlessly done, completely blurring the lines between genres. It’s as good of an illustration as any of the inevitable futility of categorizing art. This is simply beautiful music that will endure.