Let’s start at the very beginning. Can you tell us how you got involved in composing, and what was your very first piece of gear?
I discovered electronic and post-punk music at high school around 1980-81. My favorite artists were OMD, Depeche Mode, Soft Cell, Joy Division, New Order, Wire, Japan, Cabaret Voltaire, Throbbing Gristle, Chris & Cosey, Thomas Leer & Robert Rental, The Residents, Yello, Kraftwerk, Der Plan, Pyrolator, Brian Eno, Jon Hassell, 23 Skidoo, plus many others.

I borrowed a Korg MS-10 synthesizer and a Boss DR-55 analog drum machine in 1982 and started to do my first recordings. I didn’t know anything about synthesizers and what the different controllers meant. So it was pure experimentation, which I really enjoyed.

As an archaeology student, I managed to save some money because I took part in several archaeological excavations in northern Norway during summertime. In 1983-84 I had a quite impressive collection of gear: Roland TR-808 drum machine, TR-606 Drumatix, TB-303 Bassline, MC-202 sequencer, SH-101 synthesizer, Korg Poly-61 synthesizer, and a Teac 4-track tape recorder. Many of these items are worth a fortune today, but I sold all of them only two years later to buy the Yamaha CX-5M Music Computer with a built-in FM-synth! I still have it 35 years later, and it still works!

How many different studio iterations have you gone through, and what does your final setup look like right now?
This current studio in Tromsø would be my 16th, and this is definitely the best room I’ve ever had. Finally, enough space for everything. The setup is constantly changing from project to project. Right now, it consists of a number of Roland instruments from the 1970s. 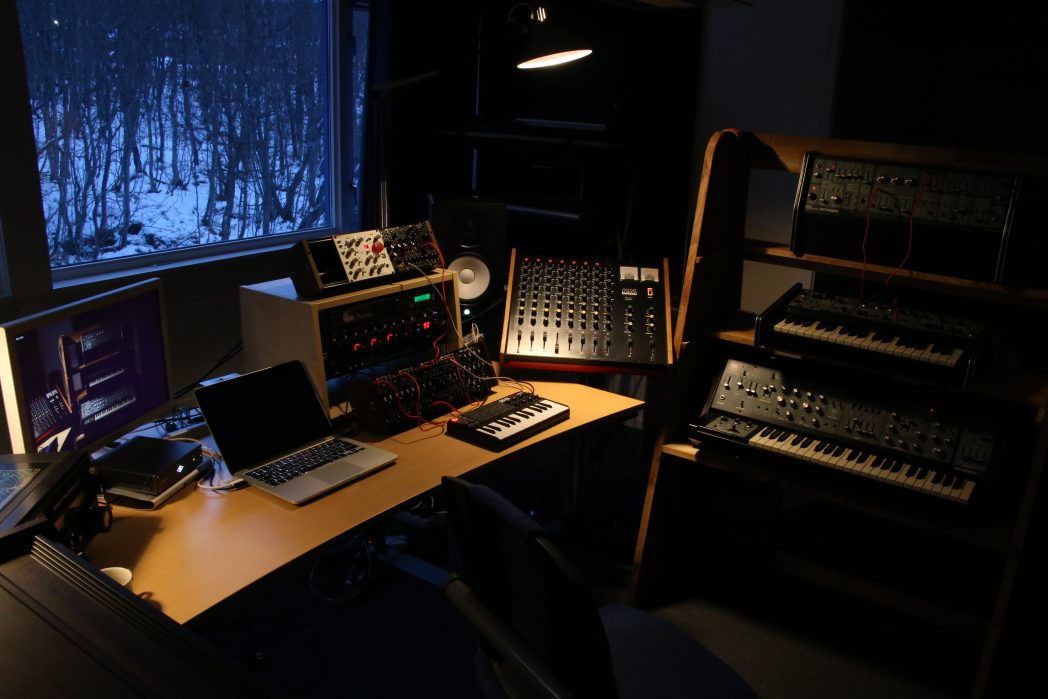 Tell us about your favorite piece of hardware.
I am not sure if I have one. My two favorite instruments in the ’90s were the samplers from Akai: S950 followed by S3000. I could use these almost blindly. The lowpass filter on the S950 is so unique that I acquired another S950 on the used market this week. The filters are the most important part of all the instruments for me. I have read a lot about filters lately and found out that Roland SH-5, an analog synth from 1975, should have the best lowpass filter ever. So when this came up for sale on the second-hand market here in Norway recently, I just had to purchase it. Roland has also recreated the SH-5 filter in the Eurorack module SYS-505. That’s why I’ve also invested in Roland’s System 500 Complete Set, a Eurorack version of System 100M from the ’70s. So even though I do not fully master these instruments yet, the SH-5 and System 500 are my favorite instruments at the moment. Otherwise, I just have to say that I can not work with many of the new instruments that have a lot of LEDs. It looks ugly and destroys concentration. System 500 and SH-5 are perfect in that respect and remind me of my old Sony shortwave radio from the ’70s. 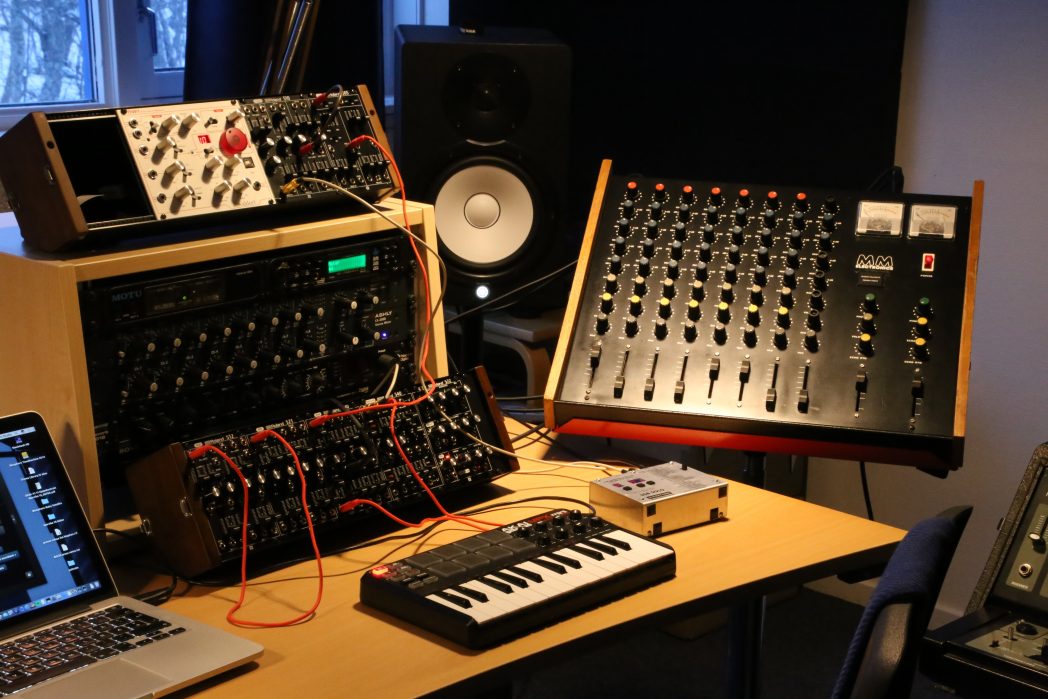 And what about the software that you use for production?
My main software is Digital Performer from MOTU. I’ve been using DP since I bought my first Macintosh Classic II in 1993. What’s really great about it is that I can still open the old files from 1993 in the latest version of DP. I don’t know of any other software that can do that. I have also used MOTU’s plugin sampler Mach3 a lot. I also like the simplicity of the BIAS Peak audio editing application. The company no longer exists, but my copy still works. I guess it’s only a matter of time before I have to switch to another editing application. I should also mention Akira Rabelais’ Argeïphontes Lyre software. It’s fantastic, free software for abstract audio. Just don’t expect to understand what you are doing. It’s extremely abstract and difficult to understand. I spent a lot of time trying out different settings until I found a setting that worked.

Is there a particular piece of gear that you’re just dying to get your hands on, and do you think one day you’ll have it?
I have always wanted the Roland System 100M. I’ve seen it for sale, but I’ve never dared to buy it because of the high prices and the fact that it’s more than 40 years old. I have it now in the form of the new System 500, which is more or less a replica of the 100M, but in Eurorack format. I was also hoping to buy the Korg Arp 2600, but it sold out immediately when it was released last year. I am hoping for a desktop version of the PPG Wave, though. I wish Waldorf could do this before Behringer does it. Waldorf’s PPG Wave plugin is also very good, but the hardware is more fun. 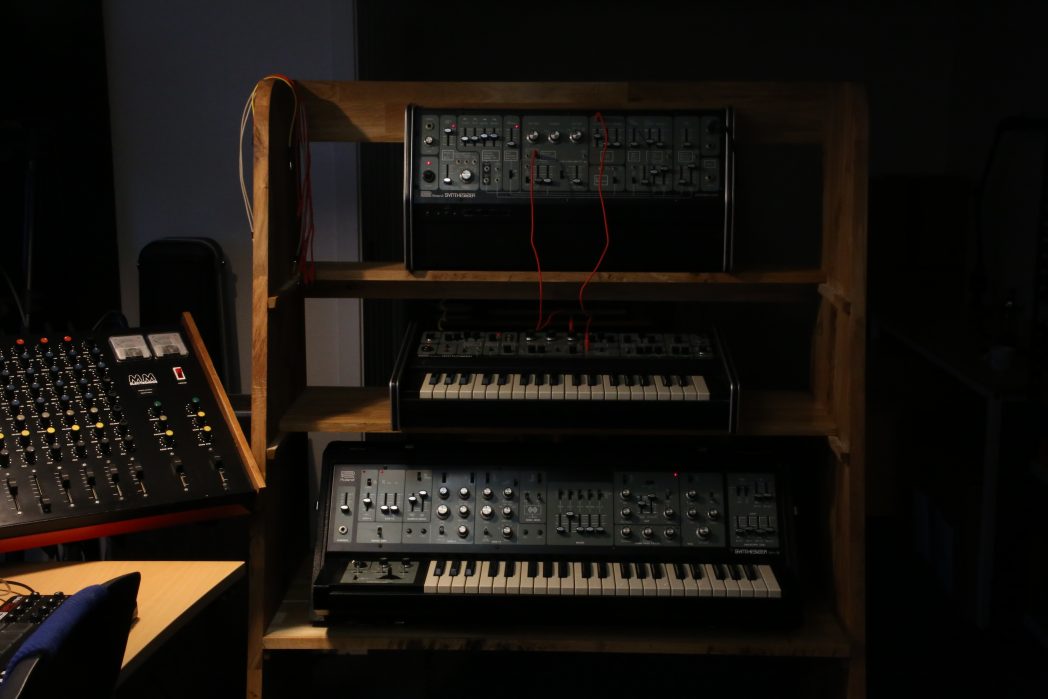 Can you please share some aspects of sound design in your work?
Many of my sounds are based on short samples of classical, acoustic instruments. Preferably from the quiet parts of symphonies where the musicians play carefully and where you can often hear the chairs creaking. When I amplify these sounds and run them through various filters and envelopes, I often get sounds that are almost impossible to make on a synthesizer. So the sampler has been my most important tool all along. I often start a composition by creating a theme with an acoustic-digital filtered sound. Over this, I often try to integrate pure synthetic sounds from a synthesizer. This makes the music sound a little more organic than if I just used synthesizers.

Any particular new techniques that you tried out for your new album?
The new album Angel’s Flight, which came out on January 22nd on AD 93, is based on Beethoven’s fourteenth symphony. This was a commissioned work with a specific wish from the client Ingun Bjørsgaard Project: make something based on this symphony. This time I sent all the samples through an Arp Odyssey analog synthesizer to get a kind of lo-fi sound as opposed to the 24-bit classical samples.

But on the next album that I am working on right now, there may not be any samples. My dogma is that I am only allowed to use analog Roland instruments from the ’70s: System100, SH-5, RS-09, and TR-77, in addition to the already mentioned System 500. These instruments will again be mixed through a MM Electronics MP175 8-channel mixer that has belonged to Martin Hannett. I hope there is an afterglow of Joy Division left in the channels. 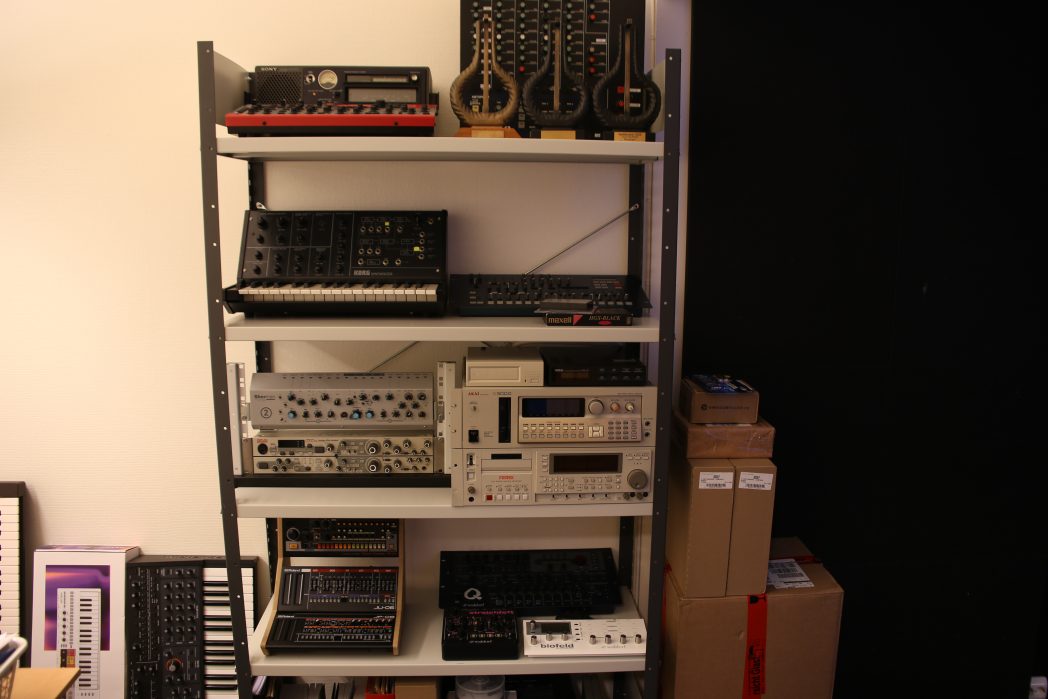 What does your live setup look like, and what do you bring with you when you travel for an extensive tour?
I am not playing live anymore. I am sick of traveling, and I hate to be interrupted when working on new material in the studio. I love to arrive in the studio on a Monday morning knowing that I don’t have to catch a flight on Friday. I remember back in the ’90s when I traveled with the heavy Akai sampler, some effect boxes, a mixer, and a Juno-106. It was too much. Eventually, it became just a Macbook, a desktop synth, and a small USB keyboard. This is how it is when you travel from Tromsø. One or two stopovers usually lead to delays and lost luggage. Therefore, everything must be taken as hand luggage.

What is the most important environmental aspect of your current workspace, and what would be a particular element that you would improve on?
The room I work in now is absolutely wonderful. The most important thing is that it is quiet here. No traffic noise. That is, sometimes I hear air traffic, but this has not been troublesome, especially not now during the pandemic where air traffic is greatly reduced. The view is not particularly interesting. I look straight into a small forest. But, as a friend said many years ago: you only need “innsikt” (insight), not “utsikt” (view). So the trees are perfect. I could never imagine sitting and looking out over the fjord and mountains while I work. It will just be disruptive. 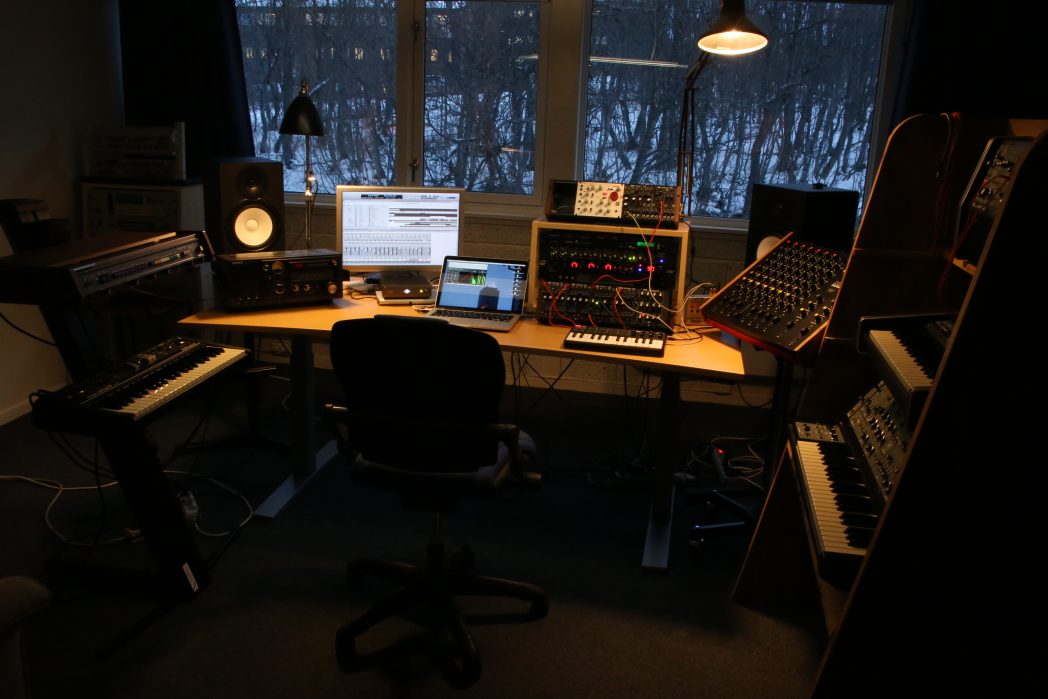 What can you tell us about your overall process of composition? How are the ideas born, where do they mature, and when do they finally see the light?
I have different methods that I use when I compose. The most used method is to find some audio sources that I can sample. The favorite has been classical recordings. Then I methodically go through the entire recording and sample maybe 10 to 20 short fragments. As soon as I have sampled something, I start playing with them. Not sure why, but it’s often easier to come up with something interesting when the sample is fresh.

Another method is to work from scratch with a synthesizer. Because I have quite a few synths, I often forget how to use them properly, especially if it’s been a long time since the last time. Then I play dumb and read the manual from the beginning while I play. “Move the PW slider and hear the difference.” After a few pages, I have often made a new sound or a new theme. Then all I have to do is to save that sound. Many synths often have such annoying short cuts to achieve this. The worst thing I know is to make a mistake, so I lose the sound while trying to save it. By the way, the Roland synths that I am working on now have no storage options, so here it is important to get ideas recorded as soon as possible. 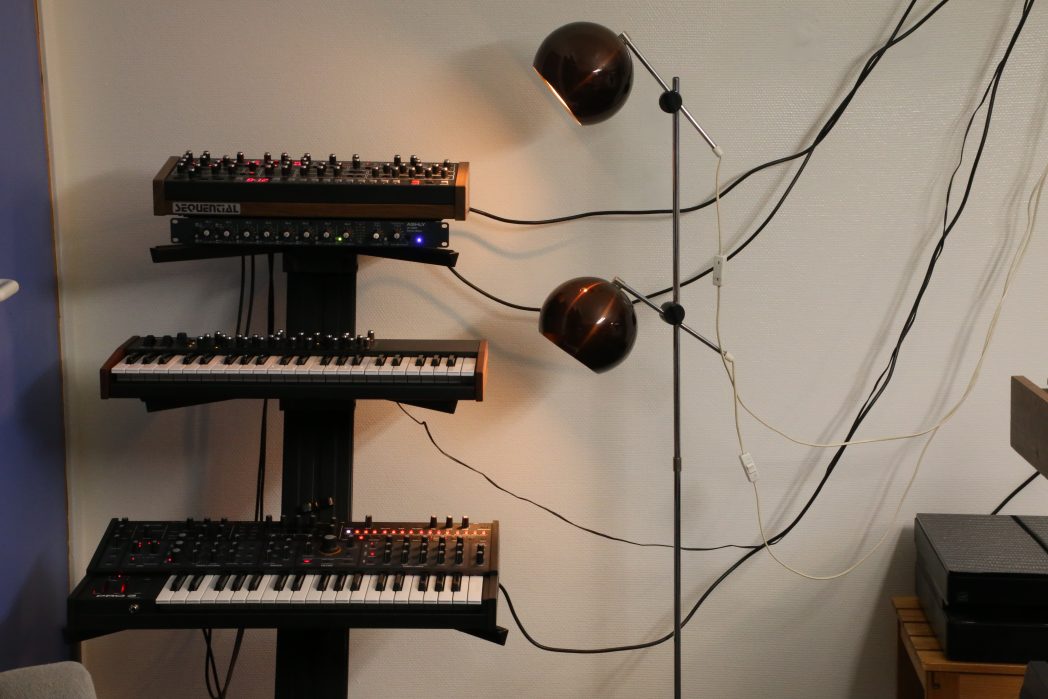 After the piece is complete, how do you audition the results? What are your reactions to hearing your music in a different context, setting, or a sound system?
When I have finished something or made a sketch, I listen to it the next morning while having a coffee. Then I immediately hear if it’s good or not, or if I have to make some changes. In some rare cases, I can listen to a new track on repeat for hours. That’s a quality sign. I also listen to music in the car and on the stereo at home. So when a composition feels finished, I often put it away for a few weeks. The final test will come when I listen to it again. Some recordings can then be discarded, or I start on another new version. I have up to 20 versions of some compositions, and some of them are still not finished. The best compositions often have no revisions.

Do you ever procrastinate? If so, what do you usually find yourself doing during those times?
I do. Lately, I’ve spent too much time looking for vintage instruments. I also regret that I sold some of my gear earlier in my career. I’ve been discussing this with the musician Hans-Peter Lindstrøm. He calls it “the synth-seller’s remorse.” For example, I regret that I sold a TR-808 for £500 in 1999. I’ve had it since 1983. I contacted the buyer last week in the hope of buying it back, but it was stolen years ago. Lindstrøm regrets that he sold me an OSCar synthesizer in 2010. I’ve told him that he could have it back, but it will be very expensive! So now I have acquired all the instruments that have been important to me throughout my career, except the TR-808, which is simply not worth £7.000. 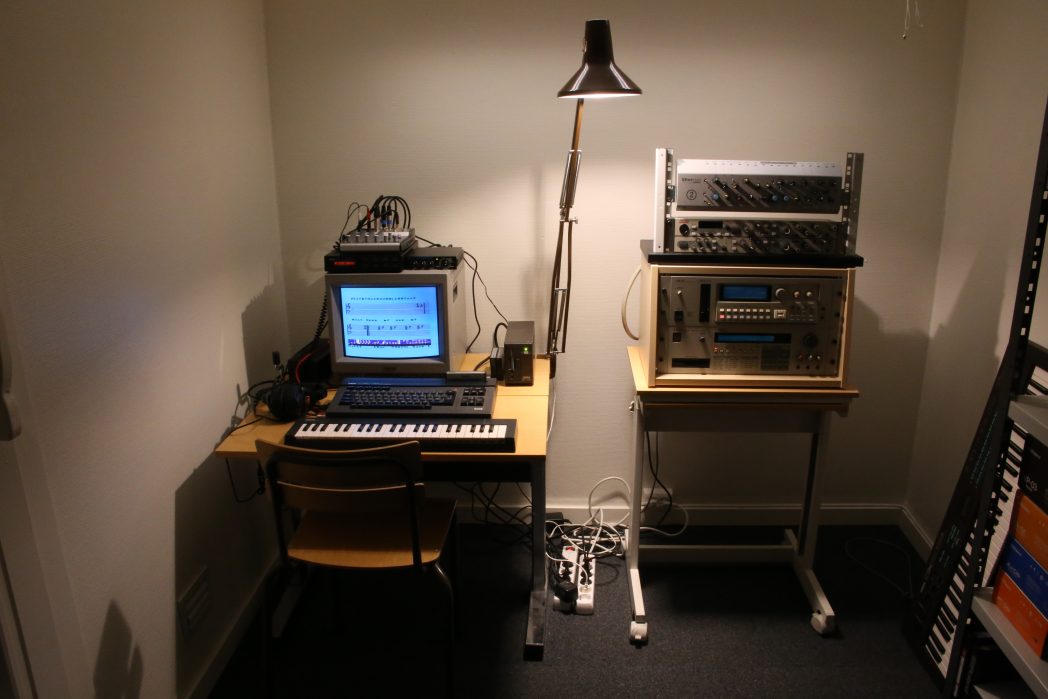 What gets you inspired?
Right now, the new studio itself. Just being here makes me inspired.

And finally, what are your thoughts on the state of “electronic music” today?
That’s embarrassing. I am not listening much to pure electronic music. My Discover Weekly list on Spotify contains mostly indie music. I got bored with club music many years ago. The same with ambient. I am hoping to hear something interesting from the Eurorack-scene, but I haven’t heard anything yet. 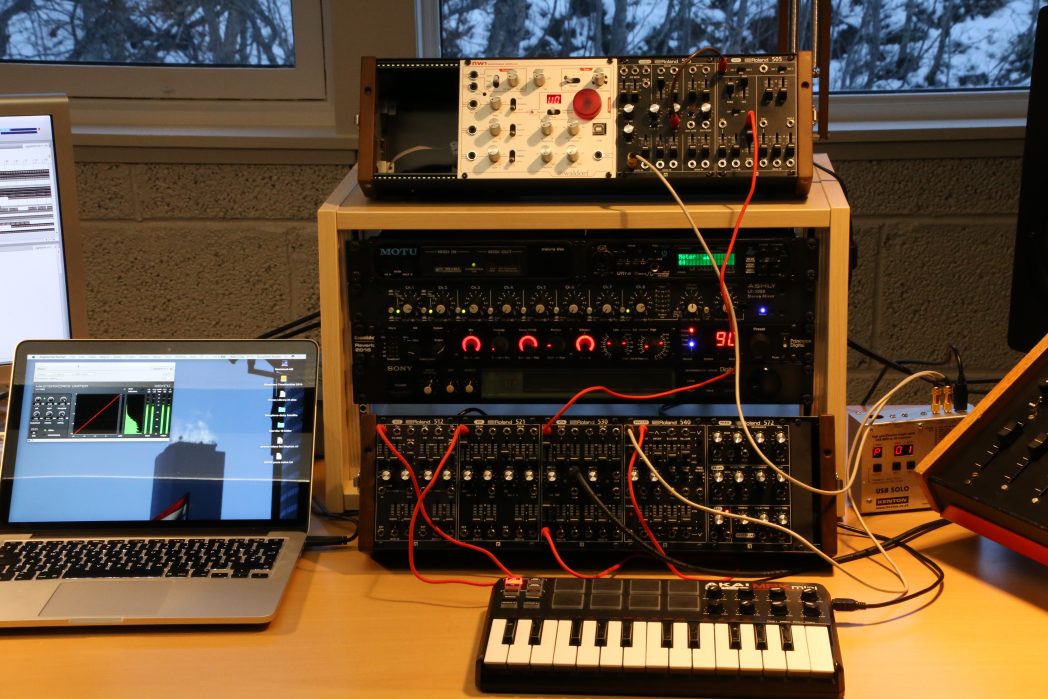