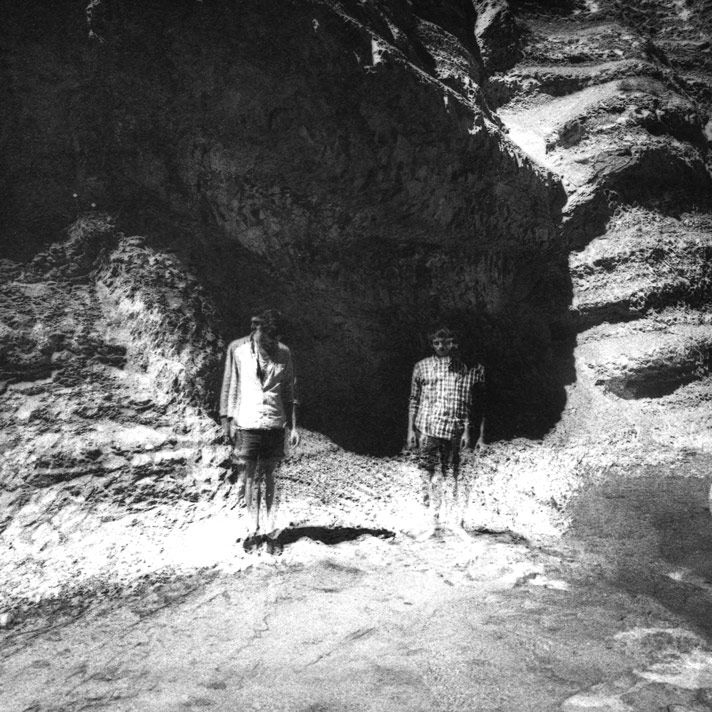 SAÅAD. What is the deal with the Scandinavian character?
We used that letter because of the circle over it. It could refer to the sun, a ‘light’ to balance the sadness of our band name (which simply means ‘sad’). Circles are a kind of a trademark that we use on all of our covers since the first release. Time is a flat circle.

What and who has inspired you to start experimenting with music? Do you have any role models or absolute favourites when it comes to music?
I came to drone music by doing it. Before we started experimenting, we weren’t really aware of what was happening in this scene. At the beginning, I was really inspired by a blogspot named ‘Deleted Scenes & Forgotten Dreams’. This is where I have discovered Stitched Vision, EUS, Postdrome, The Dawns and a lot of artists with whom I felt directly connected.

Your music sounds like something that could have been made in the cold northernmost Scandinavian darkness, but you are from Toulouse, extremely close to the Mediterranean Sea. How does one decide over there to start making ambient drone music?
I know that a lot of people define our music as dark ambient, but we don’t feel that way. It isn’t totally wrong, but our music isn’t fully dark, we don’t think about it when we are recording or conceptualizing music. For example, people define ‘Orbs & Channels’ as one of the darkest record, but if you listen to tracks like ‘Savara’, ‘Hangover #8′, ‘Soft Drug’ or ‘Forever Late’, you can hear something more than darkness. We like to compare our music to a Chiaroscuro painting: there’s no shadow without light and both are really important in all of our pieces. If you want to connect our music to Scandinavia, it’s more about its strange daylight, like a sustained dawn or dusk.

Saåad started as a solo project, but recently you have decided to involve Greg Buffier, which resulted in ‘Orbs & Channels’ released on Hands in The Dark. Why have you decided to involve him? How do you think your music became different since he is also part of your creative process?
The decision came from my desire to keep this project constantly moving. For the Delayed Summer’s sessions I’ve invited some friends to jam with me, and Greg was part of the line-up. After those great sessions I asked him to join me on stage to help me with my live sets, but he naturally became more and more involved and never left me. We worked a lot on how to translate this ‘bedroom laboratory’ into a ‘real live experience’. We found a kind of equilibrium between the studio setup and our live sets, and I think there’s a huge difference. When I was alone, I spent so many nights behind a computer, manipulating sounds and using a lot of pedal chains. Sound sources weren’t important as almost everything was done on post-production. Today I just plug ourselves into our soundcard and push the record button. Improvisation was already an important part of the SAÅAD’s music, but it became the key element of our music since we’re a duo. It’s a real dialogue where you need to be totally dedicated to what you’re doing, expressing to make it work. I think it’s more sincere.

In 2010 you have founded your own label, BLWBCK which is the home of most of your own releases and other drone, ambient, lo-fi, psychedelic pieces. How did you get the idea of an own label?
We are three friends who are managing this label. When we started, our new projects were unsigned and a lot of our talented friends were in the same trouble. A lot of bands know this situation: you send 1000 mails and get no answer, neither positive, nor negative. Rather than self-releasing our albums, we’ve decided to join our forces and to create this ‘family-brand’. It became a real label when we started to dub our first tapes in late 2011. We received so much positive feedback, that we decided to go forward. By choosing tapes as a standard format, we avoid money consideration and it’s one of our rules to keep the fun & passion of the project alive. This financial aspect was one of our biggest motivation, we can release whatever we want and keep it fun. Our catalog is composed of close friends and people that we met along this adventure. I guess that’s a common story in the tape scene.

All your releases have been published in cassette and digital format, even your motto sounds like ‘Life is a Walkman’. Is there any special reason for preferring this traditional format?
I love tapes! It’s hard to explain why I love them so much. They remind me of my teenage years, when I was dubbing my own mixtapes. During the early SAÅAD years, I was more focused on lo-fi aspects of my music, I wanted to create a music based on digital lo-fi sounds, which became so common today (noises like the hiss on your webcam or digital camera, phone recordings or like in the most YouTube footage). The obsolete cassette format fits perfectly with my concept. There’s also a very strong and exciting community in the small tape world, a place where it’s easy to collaborate, release things around the world without being forced to speak about one dollar. It’s more of a passion trade scene, and I guess I wanted to be part of it. ‘Life is A Walkman’ was my signature when I was 18-20 years old, and it’s funny that 10 years later I have started up a home-made tape label.

Your first vinyl “Deep/Float” just came out with 300 copies, once again on Hands In The Dark. How does it feel that after so many years of producing music finally you will be able to hold a 12” copy of your work?
I’ve dreamed about this day since the beginning, and we couldn’t find a better label than Hands In The Dark to make our dream come true. The conception of this album was a bit ‘painful’, full of doubts. There are hours of takes that we erased because it’s was just ‘good’ music, something that we have already done. We don’t want to repeat ourselves, we want to keep ourselves surprised by the sounds we are doing. For the moment, press feedbacks are eulogistic and the label is very happy too. We felt a bit lost at some point, but now that we can hold this beautiful object, we feel relieved.

The creative procession of ‘Deep/Float’ made you retreat into nature and let yourself go totally free. How should we imagine this?
If the Faï Valley and this retreat are the backbone of this album, it’s not a contemplative or meditative record. We were more focused on how drone music can be body-related. When you play it loud, it makes your organs and bones purr… it’s not just mental music. This sensuality of drone music was one of our lead concept. Drone and sex are working on the same pattern and simple desire, the need to be entirely swallowed by something, to lose yourself, to feel alive and relieved. You can also connect it to what we are looking for in spirituality or drug experiences. It’s about love, fear, abandon, hope… It’s not a dark album, nor a peaceful album, it reflects life, a deep grey zone. During the residency, we had to remove our usual effects to be able to play on the Faï massive horns, it pushed us to learn a new way to do our music. During the mixing phase, I was less attached to ‘destroy the sound’. You can recognize a bit more of the instruments, while before it was just a boiling sea of sounds. It’s more sincere.

Romain, you are the man behind the cover artwork of SAÅAD albums as well. In what way does the music control your visual ideas? ‘Deep/Float’ is a 40 minutes long exquisite journey into the deepest depths of our visceral nature. How can you condense all this in one single image?
Both are really connected. Most of the time the front cover came first, as it gave us the color and tone. The photography of the ‘Deep/Float’ cover or the one that you’ll find on the inner layer can be perfect to sum up this album. It comes from photographs that I took at the Faï’s residency. I can’t say how it influenced us, but we had it months before we started to record the album.

You will be touring in France and the UK. Any plans for visiting the rest of Europe or other continents?
We’re really open to all kind of propositions, we hope that we will be able to visit more countries in the future, maybe late 2014.

Be sure to read review of Deep/Float

Interview by soundsofatiredcity.com
Republished with permission