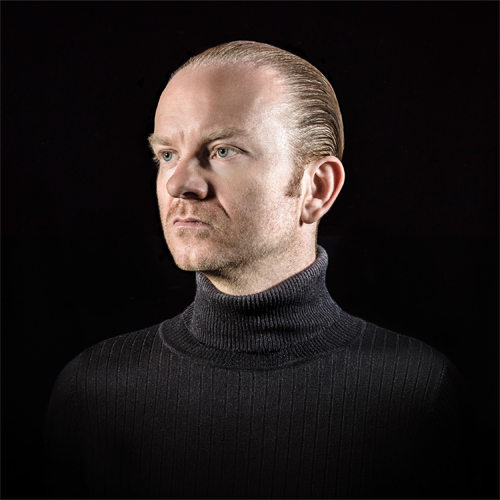 Hi Uwe, how and where are you these days?
hi there. i’m in santiago, preparing the “HD” live set at the moment.

Some of the tracks on HD were in the making for some time now. Were you always working in the background on finishing this particular album, and why do you think it took almost eight years to complete it?
well, i wasn’t really working on it for eight years, but the process had its phases. basically the album was initially conceived as “hard disc rock” in 2005. back then i had begun to record it and it went as far as to a “premix”. due to technical issues i lost those mixes though, and a year later i mixed it again (which in itself isn’t a fun thing to do, re-doing a finished work). apple then decided to switch to mac os X, and so did i, with the result that i lost the mixes one more time. i got so fed up with technical issues, that i totally lost interest in the album and basically dumped it. in a way i felt like i had lost “sync” with it, like inspiration and “the right moment” kind of separated from each other and all of a sudden the tracks did not feel right anymore (apart from the fact that i really didn’t want to redo the mixes for a third time). the tracks then simmered on my hard disk for all those years and every now and then i went back to them, for the sake of curiousity. obviously my perspective on things, my interest and focus changed quite a bit during the last 7 years (they say every 7 years is a cycle) and the more time passed, the more of the old tracks i began to dislike. most of them i decided to delete, so that by around 2012 there were only 4 of the old tracks left: “my generation”, “empty”, “the sound of decay” and “i love u (like i love my drum machine)”. i played those tracks, even though they were unfinished/unmixed and in pretty rough condition, to olaf bender from raster-noton and he was really excited about them and said “why don’t you finish the album and we release it?”. i thought this was a pretty inspiring plan, so i began to rework the old tracks and composed 5 new ones. the old tracks though, i basically turned inside out. most of them got completely new lyrics and i re-recorded most of them.

You mentioned that the original working title behind this album was “Hard Disc Rock.” Does the new title “HD” still represent “Hard Disk” or is it “High Definition” or something else completely?
i basically skipped the “rock” part 🙂 to me “HD” stands for “hard disc”. in a way, everything i do, is manipulating hard disc information. aesthetically speaking, the way i make music has a lot to do with operating hard disc data, even though it’s an “analogue/digital” hybrid technique. once information ends up on a hard disc, it’s available for manipulation. sound design, arrangement, composition, etc., are all interlinked with hard disc logic. the entire methodology and practicality is related to this medium.

Some of the pieces on the album are a bit political, especially when it comes to the politics of music industry. The track, “Stop (Imperialist Pop)” is especially laser focused on commercial labels and their ‘fascist control’ over the music with ‘corporate sound in dolby surround’. It’s safe to say that the independent music community is dissatisfied with ‘imperialist pop” to the point of simply ignoring it. But you approach the topic head on. Can you talk a little about your decision in this move?
it’s simple. there are topics that i find worth being mentioned and i felt it would be time to share those. there are not many artists these days making social/political statements, at least no clear ones. i totally understand that its difficult or even impossible to express coherently on political topics, since we have passed the line where “true” and “false” can clearly be distinct as such. the more interesting though i found it to make such a statement, even given the danger it may come across incoherent or wrong. if music could become more “real” in that aspect, i would find a very positive thing. “real” in the sense of feeling a person behind the music, since i think that most of the music we hear these days is kind of formulaic. now, on the topic itself, yes, i find it impressive how world wide media is controlled by a couple of companies and how incredibly full of shit nowadays mainstream media actually is. in fact, it is way beyond just being “bad”. obviously, underneath the “mainstream”, a lot of alternative streams have taken shape, and i don’t have much to do with the mainstream in every day live at all. yet, i am wondering how, if and when mainstream, which in my opinion is the aesthetic surface of post-capitalism, together with the rest of it all, will finally disappear.

Most, if not all, of the tracks on HD feature some sort of effected or manipulated vocal design. What particular sonic aesthetic did you attempt to capture with this sound?
any sound, once recorded on a hard disc, becomes subject to total and complete manipulation. the human voice especially has always been a topic i’ve been interested in, above all in terms of synthesis, resynthesis and analysis. it’s quite fascinating to be able to manipulate the human voice down to the very “pixel” and to shape it just the same way i would shape any other sound. when arranging or composing a song, i usually do have a specific idea of how the voice should sound and how it shall be combined with the instrumental part of the track. the sonic aesthetic very much is related to every single song in particular, yet the overall idea very much is related to a technique i have developed during the last two decades of how to manipulate and approach the human voice in general.

There are a few guest appearances on the album, including Jamie Lidell, Alva Noto and Jean-Charles Vandermynsbrugge. You say that this diverse group of musicians “reflects the general spirit of HD”. Can you expand a little on this topic and share with us your thoughts on these collaborations.
usually, every composition is taking its own path, and calls for its own specific realisation. when it comes to vocals, this is of course true too. for some of the tracks i had very specific vocals in mind, like especially for “i love u”. i had agreed with jamie to have his vocals on this track, every since i had written it, which was a long time ago. during the last couple of years i had changed the lyrics though and finally this year i was ready to complete the track. especially on this song, the vocals i had in mind where something i could never ever have done myself, and the entire composition was totally made for, and focused on jamie’s performance. he did a wonderful job! a similar case was “pop hd”, on which jean-charles vandermynsbrugge spoke the lyrics. on this song i wanted lyrics in french, since the word “HD”, i found, sounded best in that language. when jean-charles was here in santiago earlier in 2012, i invited him over, showed him the rough mix of the track, explained him the basic idea and together we finished/translated the lyrics, which i had outlined in english. i think his voice fits perfectly, since it’s not a typical “vocalist’s” voice. he also did a great job in interpreting the lyrics just the way i had it in mind. last but not least, alva noto provided additional programmings on “ich bin meine maschine”, a track i recorded some time in the middle of last year. even though i had the track almost finished, i was missing “something” different, in terms of adding elements to it which had to come from a different angle and source. the elements he delivered pretty much acomplished my vision. as you can see, even though the idea with “HD” was to create some sort of holistic image, it was important to incorporate all sorts of influences and input. this very much reflects my current idea about my own work and musical vision.

Although this may be a bit hard for you, can you please talk about your decision of shutting down Rather Interesting label with the untimely passing of Pete Namlook. And are there other albums that are still dormant and are yet to be finished that we don’t know of?
pete and i started “rather interesting” in 1994. pete was basically doing the business, while i had free hand on artistic content. during all those years we had developed some sort of routine on how to run the label and to me it was a very “natural” set up. even though we were not in touch on a daily basis, every record i made on “r.i.” passed through his system and we spoke about it every now and then. of course pete was a very important, if not the most important factor in “r.i.” and to me the label is simply impossible to imagine without him. when he had passed away, which was a big shock to me, many days later, when the whole situation started to sink in and i thought about “r.i.”, i just felt like it would not make sense to continue the label without him. in a way the label would not be the same without him and i think it would feel wrong to just continue this operation, but with someone else. as for dormant/unfinished works, well, yes there are a couple of things laying around on my hard disc. some are just tracks/songs… some more advanced than others, and for most of them i have no plans just yet, except for finishing them when time comes. coming back to pete namlook, some years ago we had started to work on a new album, which now obviously can not be finished. i have also decided to leave the material i had sent him for completition, unused/unreleased. the same way new material i showing up, existing one dissappears… it’s all part of the void!