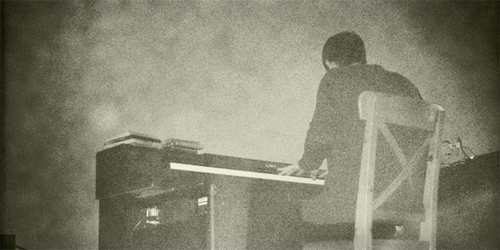 Hey David, how is life in Gävle? Maybe next time I’m in Stockholm, I’ll have to drive up for a day!
I was born in Gävle but I live in Eskilstuna so you’d have to drive west for one hour to reach me. I will head up to Gävle for my birthday in a few days though. I’m guessing everything will be as normal though. Pretty and quite.

I believe this is our third interview! We spoke in 2008 after A Summer Beneath The Trees, and then in 2010 after Like Green Grass Against A Blue Sky. How would you say your sound have changed through the years?
I guess mainly the instrumentation. A summer beneath the trees had a lot more going on with Peter Broderick and Danny Norbury adding a lot of different sounds to it. Like Green Grass Against A Blue Sky was more focused on the piano and the latest album Sun Peeking Through has quite a lot of strings on it, though it’s a bit more stripped down than A Summer Beneath The Trees.

Yet, when I hear an album, there’s that distinctive Library Tapes signature characteristic. Even the album titles carry the same feeling. What is the central theme behind Library Tapes output, as opposed to your other collaborative work?
I guess melancholy is the red thread to some of the releases are a bit more hopeful than others. All songs on the Library Tapes albums starts out with my ideas and feelings. They may be taken in a new direction when collaborating of course, but they always starts out with me as opposed to other collaborative work. Of course, sometime they also start with an idea of mine but most of the times the sounds will travel back and forth and take on new shapes and meanings.

I know that you’ve previously worked with Danny Norbury in the past (on Le Lendemain). But how did you meet Julia Kent and Sarah Kemp?
I’m a big fan of their work. With some of the songs for the new album I really wanted that feeling I get when listening to Sarah’s project Brave Timbers. It always reminds me of late summer nights.

Do you have any plans on releasing albums by other artists on your Auetic label?
I’ve released one album by Annelies Monseré called Marit. It’s a lovely minimal singer/songwriter album. It’s not very likely I’ll release anything I’m not involved with in the future though. It just takes up too much time to get it done right and the record industry is in such bad shape that it’s pretty much impossible to make it work.

What kind of microphone do you use to record your piano, and what is its placement, if it’s not a secret?
It depends where I record as I don’t have an acoustic piano at home. I don’t have a standard way of doing the recordings and there’s nothing mysterious or interesting about the process to share really.

What? You don’t even have a piano at home? How come?
The apartment we live in is too small, and even if we could fit one in here I’m guessing our neighbours wouldn’t be too pleased. So sadly I just use a digital piano at home.