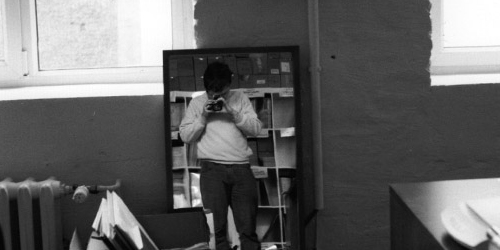 What are you working on right now?
I’m currently working on not working that much, not even music. I spent a lot of time switching inbetween Hamburg and Berlin and things have been way too busy over the past months, it’s time for some time off. I’m basically on my way to a secluded house in Denmark, just need to finish this E-Mail and find me some good books to read.

What prompted you to explore the expeditions into Arctic Ocean and Antarctica?
I’ve been a fan of these sort of mystical stories for a long time, not so much in the scientific sense but regarding the overall theme here – pushing the northern limits, searching for new, distant land, triumphant battles vs. nature – such things. When it comes down to the process of composing these stories deliver all the creative input you’ll need.

How did you prepare to recreate a sonic environment of these desolate quests?
I traveled continuously over the past two years – to Ireland, Iceland, Norway, Denmark, trying to spent as much time close to the sea as possible. I recorded and collected a lot of sounds and eventually set up a temporary studio in a small house in Denmark to merge it all together. Also a few friends helped me out and recorded additional sounds for the record. In the end Martin (Neo Ouija) and me sat down in his studio and I watched him do his magic.

Would you ever consider traveling on an expedition to the poles yourself?
Sure, though I think all the real expeditions have been done by now. I also think of turning my mind to other things now. I’ve been so involved with all this music for forlorn landscapes and troublesome journeys, it’s actually time for some less disquieting sounds. We’ll see how that works out.

I’m a big fan of Vladislav Delay so I have to ask, how did you end up working with Sasu Ripatti?
We work very close regarding his overall communication and the digital appearance of his works. We know each other from previous times at Kitty-Yo – Sasu and Antye used to live right above our office back then.

Who are some of your inspirations when it comes to music composition?
Currently… Ernst Reijseger, Cliff Martinez, Jonsi and Alex, Paavoharju, Stephan Mathieu