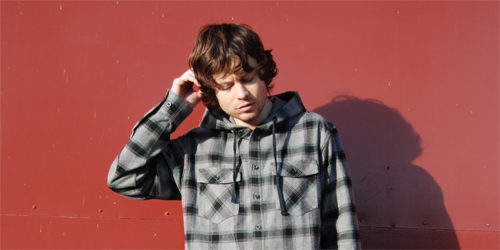 Hey Barry, how have you been? First I must start with the obvious question on everyone’s mind: who is The Host and what prompted this new alias?
Hey, thanks for the questions. The Host just felt better as a project title, I wanted to tie it all together as a standalone project with its own themes. I liked the layers of meaning you can extract from it, and how it kind of meshed modern technological lingo with religious ideas. It had a PKD-ish ring to it.

I hear a range of influences on the album, including, of course, Planet Mu’s latest tribute to juke and footwork. What inspired you to produce such a diverse collection of tracks?
I have been listening to footwork, for a few years now. Some of the tracks on The Host go back to 2009, like Second Life (which was originally called GeoCities). So I had the genesis of a web 1.0-themed “cassette footwork” project back then. Then add to that all the sounds from the mix I made for XXJFG around the time The Dissolve came out, that summed up a lot of my listening. I listened to a lot of records on Not Not Fun too, they inspired me a lot, how they recontextualised old New Age stuff.

Is that you playing the guitar and bass? What other vintage gear appears on The Host?
Yeah that’s my playing, that was the main idea for the LP, to feature the guitar a lot more, and in a less disguised way. I don’t consider electric guitars to be vintage instruments though! I know they’ve got a bit of history by now but they’re pretty much contemporaneous with synthesizers and tape.

I feel as if Chicago’s ghetto house has matured into that “post-juke” genre, with key elements driving a full on headphone experience. As with most club and dance oriented genres, what are your  thoughts on evolution of styles in this “post-“everything world?
Novelty does seem to make itself felt more and more rapidly. The way I get exposed to all these new things is usually the same though, from solitary online browsing. That feels like the backdrop to a lot of modern music culture.

How has your sound matured over the years, and where does The Host fit in your musical journey?
I’m wary of musical maturity to be honest, it’s usually synonymous with sounding boring. I’m always trying to keep the whole process a buzz, capturing what I’m doing in the moment and moving on. Although at the minute, I’m forcing myself to get my playing together on guitar and bass, just to see how that’ll expand my options. And that’s a fairly obvious way to mature I suppose, purely because it takes a lot of time.

And what about your Boxcutter moniker? Do you think we’ll still hear some more from him?
Nothing planned but I’m still playing gigs under the name, and I like finding new ways of incorporating older stuff in live sets. Maybe if I make another Phrygian mode freak-out, I always thought the name suited those tracks best.