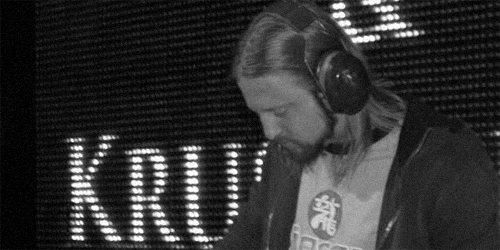 Hey Simon, where are you now and what did you do this past week?
I recently moved to California and spent this week working on material for the upcoming Krusseldorf & Behind Blue Eyes album coming up in 2012.

Can you talk a bit about your different aliases? How is each one different and how do you separate the music when you produce under one verses another?
Krusseldorf is my free form project where I can test out new music theories and technical theories and put them into action, not all material gets used due to the reservations to where one can release material that currently has no definitive scene. But the project is very much about experimentation and my most MUSICAL project. Atrium Carceri is completely different and I produce this under strict rules and when experimenting with my psychological theories on how sound manipulate thought patterns, emotions and enlightenment, I use test groups of listeners for AC to report how they got affected from the material and it is a very personal project because it reflects my travels beyond the physical. Za Frûmi is the project I do with Simon Kölle and that project is much more like creating a soundtrack for a movie that was never made, in a way. We work a lot with recording field sounds at various locations and often try out new ways for the surroundings to influence us (The album Simon Magus from our side project Abnocto was recorded in an underground bunker of sorts deep down under the ground). Alembic is the project I do with Zekazy and is mainly a pooling of resources from both of our personas, what new theories we learned and are interested and testing out and so on. Kronox is my dubstep project which is just about having some fun.

What is your studio setup like? Care to share some production secrets?
The most important thing about the studio is my Rokit RP8s in combination with the TC TWIN, the next most important stuff is all the microphones I use but they are far too many to list here. Production secrets hmm, I can share something that keeps bugging me. The volume Race! Non producers often perceive a loud sound as sounding better than low sound volume, this has resulted in the overuse of limiters and compressors when masterers work, but it destroys the dynamics of the audio. Use your volume knobs!!!! To all who listens, stop the madness!

You have been producing since the Amiga days – does that mean you were into the whole demoscene back in the days, with 4-track MODs and 8-bit samples?
I was never a good programmer, but I used a lot of tracker software back in those days and I was a consumer of the demoscene for sure. 4kb demos still blow me away.

What was the story and inspiration behind the music on From Soil to Space?
I carry over this from Atrium Carceri I guess, but I never explain my artwork, texts or story of any of my projects. The inspiration is all over the planes, but mostly my inner travels and audio theories I wanted to test out.

How is the music scene in Sweden?
We don’t really have a good music scene for listening to music live here, most people attend parties to, well, party. Not listen to music.

Tell us about your upcoming work with Behind Blue Eyes.
There is an upcoming album in 2012 as of yet untitled, with groovy pumping 4/4 beats. The project is always morphing and changing as we both fuse our energies into it having vastly different experiences in audio and music productions. The upcoming album has a different style than the previous one, but still very much has that deep Iboga Progressive sound tattooed on its forehead.

Read Headphone Commute review of From Soil to Space