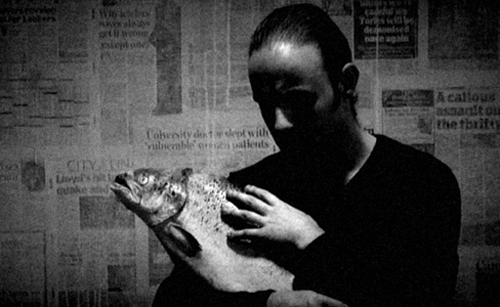 Your first album, L’Autopsie Phénoménale De Dieu, seemed to surface out of nowhere. Yet from its production quality I can tell that you have been recording for quiet some time now. What made you to make the move from arranging music for theater to a solo debut album?
I’ve been listening to too much music in a manner that is way too intense for anyone to cope with… always on the look-out for samples… the good sounds… the right feel…. It forces you to listen to too much material, certainly in these times….. When I compared my work to most of the things that get released these days I figured it wouldn’t be right not to have my work out there.

How did you end up getting signed to Miasmah?
I was looking for a label that would provide a nice context for this sound. I approached John Twells (Type Records) but he passed my demo on to Erik Skodvin (Thank God!). Erik and I met up, had a couple of drinks, a nice night out, some good food & a decent talk about ‘directions’. ‘L’autopsie’ was finished two weeks later.

Tell us a bout Grimoire. How different is the composition process for this sophomore release from your first?
The first album was basically a compilation of scores that I made for various theatre productions. ‘Grimoire’ was intended as a proper album. This is a completely different way of writing. I had no images to start from… just the music…. Actually, it make the whole process a bit harder. Images provide a starting point. They can really inspire sound. For ‘Grimoire’ I started from a blank page… liberating experience… but not easy…. On the other hand, I do realize that this is the way most composers work. I’m a happy man to be working with Abattoir Ferme (our theatre company), because they provide me with a never-ending stream of impulses that trigger inspiration.

What prompted you to explore the theme of these books of magic?
These themes (the occult, the dark side of man, the underbelly of society, outsider arts, underground communities, etc…) are typical topics in the works of Abattoir Ferme. I’ve been working with these topics for ten years an I’m afraid they have entered every molecule of my creative work. They also provide a bottomless pit of inspiration to draw from. I was looking for something that could provide me with a theme for an album. I like the idea that ‘albums’ should be taken as a whole. Grimoires seemed like a nice metaphor to me for what ‘an album’ should be like…. something to read from start to finish… something to be inspired by… something that is able to trigger someone’s potential….

Who is the protagonist of this album and what is his/her story?
Sorry to disappoint you, but there’s no great story to be found here. The protagonist is the listener and he has to make his own story while listening to this music. Every individual has enough reference to relate to this music. There’s no absolute truth to be found here… there’s just you… the listener… it’s your world… these are your fantasies… your fears….

Can you reveal the mysterious source of some of these recordings?
No, I can’t… I’m afraid they’ll find me.

Tell us about your work for Abattoir Ferme.
It’s a theatre company based in Mechelen, Belgium. We’ve been working for 12 years now. It’s a tight unit that specializes in creating a world of dark, moody, gritty atmospheres. Some of the plays feature no words at all (which gives plenty of room for the soundtracks). People who saw our performances can be divided in lovers and haters… I’m afraid there’s no in-between…. check out where you stand at abattoirferme.be