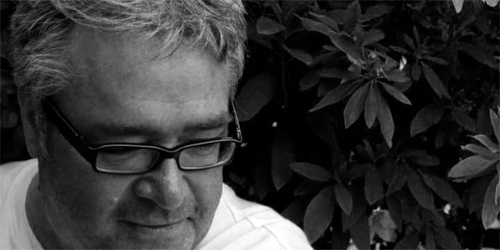 Your new album is challenging, yet lovely in its brevity. Tell us about your experience recording it and also how you connected with Alicia Merz.
The idea for the album came to me while I was sitting on the porch of my son’s house, overlooking Mexico City, making some field recordings of the cicadas and traffic sounds. It seemed to me that these sounds were so essentially Mexican that they should be used as the basis for some music that conjured up the environment and atmosphere of the place they were recorded in to the listener. I tried to capture the heat and space of Mexico by using deep, dry, airy drones, made by treating the sounds of the resonant harmonics of a semi acoustic guitar, but treated the sound in a way that also gives an impression of the density of the atmosphere of the beautiful country. On the two tracks that have any kind of percussive sound, this was made by recording a Buddha Machine through the strings and pickups of a Squier Stratocaster, then looping, cutting, stretching and slowing down the results. The only other sounds are a very muffled vst piano and a few notes played on the Strat.

And then there’s the voice….I first heard Alicia’s amazing vocal style about a year ago, and I was totally captivated by. It has a real ‘Lynchian’ quality to its whispered beauty. Gave me goosebumps! We had a few conversations via Facebook and Soundcloud (very handy considering I am in the UK and Alicia is in New Zealand) in the run up to the release of her album ‘Without The World’ which she released as ‘birds of passage’ on Denovali Records earlier this year, and then I noticed that she had written some very complimentary comments on the rough sketches for a few of the tracks I has uploaded to Soundcloud. So I thought I’d be a bit cheeky and ask her if she would like to enhance one of my tracks with her amazing voice, fully expecting to be given the brush-off. But she said yes! The results can be heard on the track ‘Mixtli Sleeps’. We’re both really happy with how it turned out and have made tentative arrangements to work on a more substantial project in the not too distant future.

Are you a self-taught musician, and what is your primary instrument?
I would hesitate to call myself a ‘musician’ in the traditional sense of the word. I don’t generally play any musical instruments, and when I do, I don’t so much play them as ‘use’ them. I made a conscious decision many years ago, when I first started experimenting with radio broadcasts and cut up tape recordings that I wouldn’t learn to play any instruments. I didn’t want to know what the rules were. I still don’t. My primary instrument – a difficult question to answer. Looking around my studio, I guess you would say it was the guitar, because I have more of them than any other instrument. But as most of my drones are made from everyday sounds that are cut, looped and treated inside the processor of my laptop, I would have to say that the laptop is my primary instrument.

Do you engineer your own records?
Yes. It’s all done in Ableton Live. My music is all about the interplay of frequencies and it’s sometimes quite difficult to control how this takes place. it’s about how I layer the sounds. It can make the difference between a gentle pulsing harmonic wave and a howling feedback cacophony, both of which are useful, but it can be tricky to get the right one sometimes. They are very sensitive. I have even had new sounds appear on a track just from the process of uploading to Soundcloud!

You seem to listen to a wide range of music when you’re not prolifically composing ambient drone poems. What artists have had the greatest influence on you?
There have been four life-changing records so far in my musical experience. The first was hearing ‘Riversong’ by Tonto’s Expanding Head Band, back in the early 70’s. It was the first proper ‘electronic’ music I had heard, and the way they got a synthesizer to emulate a human voice just blew me away. Second was hearing ‘Jocko Homo’ by Devo. I can still remember where I was – in the kitchen at my friend Sonya’s house – when I first heard this track. The stripped down robotic sound was a real eye opener. Third was ‘Thirsty Animal’ by Einsturzende Neubauten (with Lydia Lunch and Roland S Howard) The sheer industrialness of it made me realise, for the first time, that I too could make music. This record was the catlyst for everything I have written and listened to since. And the fourth was ‘A Huge Ever Growing Pulsating Brain That Rules From The Centre Of The Universe’ by The Orb. I first heard this track whilst in a state of chemically induced euphoria at a house party in the 90’s, and it seems to have imprinted itself on my subconscious. The fusion of dub, electronics and ambient helped to guide me from the path of industrial noise and set me on the way to what I’m doing now. Individual artists that have influenced me include – Peter ‘Sleazy’ Christopherson, William S Burroughs, Francis Bacon, Karen Carpenter and Thurston Moore.

Can you tell us about your upcoming work?
There are two or three things on the horizon. The first is a split release with the fantastic Motion Sickness of Time Travel – this is nearing completion and should be out before the end of the year. Second is a project associated with Jonathan Lees who runs the Rural Colours and Hibernate labels – a piece based on my interpretation of a piece of artwork that he supplied. Third is another project with Alicia – this is still in it’s early stages. Oh and I still need to complete the second part of ‘Even In The Quietest Moments’. I’m hoping that I’ll be able to find a label to release both parts together.

Interview prepared by Elizabeth Klisiewicz for Headphone Commute.
Be sure to also read Elizabeth’s review of The Heart of The Sky.