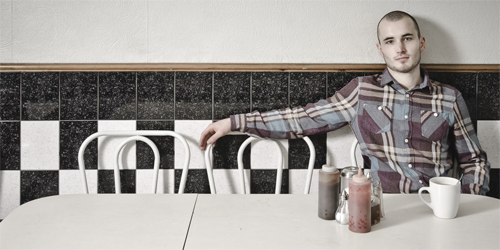 Who is Debian Blak and what is his story?
I’m a musician and producer. I aim to make music that can work on different levels, from your bedroom with your headphones on to a club and anything in between. Debian Blak officially ‘launched’ at the beginning of 2011, but music has always played a major role throughout my life – I began playing the violin and piano as a young child and then picked up the drums when I was 12. As an artist I’ve been writing and producing for a few years now under a couple of different aliases After a few months in 2010 away from song writing while I produced East Park Reggae Collective’s forth-coming album I decided to completely refocus my energy on my solo material, so I spent a while listening and playing with ideas before completely immersing myself in writing and finishing new material.

How would you describe your music to my 90-year old uncle?
Experimental song-writing. I try to draw on influences from every genre that I’ve ever listened to, and to keep the sounds and science behind the music interesting, so that hopefully the music remains individual enough to create my own identity.

Tell us a little about your production process? Is your studio mostly software based? Where do the vocal samples come from?
I usually start with a melodic idea. In fact, I usually start with an idea in my head, and after running it around and building it up I then try and replicate and develop it in Logic. Most of my sounds are either software based or sounds that I record and then manipulate. Or sometimes samples that I’ve sourced and messed around with. For my next EP I want to go even more down the ‘recorded and manipulated route’ which will hopefully give my sound an even more original style. Vocal-wise it’s a mixture, some of them are my own voice recorded, chopped up and processed, and some are vocal acapellas that I’ve manipulated. Apart from ‘Take Me On’ which is obviously Anna Stott. We did a lot of vocal noises such as breathing and tut’s and cluck’s to make that vocal really interesting and sit with the rest of the EP.

What is your one of the most memorable moments from spending a week in Berlin and attending the classes sponsored by AKG’s Scholarship of Sound?
That’s a tough one. I think spending the afternoon with Pole at his mastering studio was really amazing. We got to check out his hardware in his studio and also learn about how to master for vinyl, and then we got to actually cut some vinyl ourselves, which was really interesting. Jon Berry from Kompakt also provided a real eye opener into the industry and it was useful learning about release schedules etc.

What are your thoughts on the evolution of sound in the post-dubstep/garage genres?
I love it. Straight dubstep just doesn’t resinate with me any more. When it was new to me a few years ago I couldn’t get enough of it, but now I’m much more interested in innovative sounds, experimental production techniques, nice melodies, great beats and most of all space in the mix. I guess you’d call my sound post-dubstep but I couldn’t really label it as I draw on so many different influences. Though maybe that’s what post-dubstep is…

What are you working on right now?
This summer I’ve been playing a lot with East Park Reggae Collective at various festivals around Europe. But now things are spacing out a bit more so I’ve got a few projects I need to work on. Firstly I want to write another EP. I’ve got loads of ideas for it but I just need to sit down and get into it. Also I’m working with Stuart McCallum from The Cinematic Orchestra on helping to produce parts of his next album. I’ve also got a couple of documentaries to write some music for and in September I start work on writing part of the soundtrack for an upcoming British film. There’s some potentially exciting news with this film and they want one of my tracks as the title track so watch this space!