I stopped apologizing for my delayed reviews a long time ago. I just can’t keep up. But I swear, one day I’ll get through all of it, and get the word out about the music that affects me deeply. The music that stays with me after it’s gone, the sounds that excite my neurons, and the message that just makes me feel. For this installment of Sound Bytes I revisit a few albums I have left behind, but dusted off again for this occasion… 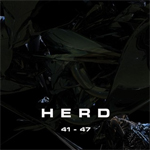 What happened to the amazing formula of Future Sound of London? After all, their approach to morphing seemingly unrelated samples into the dreamscapes was the subject of a long and frivolous debate in the late 90s. I remember completely falling in love with Lifeforms (Virgin, 1994) only to read later some blasphemy on Usenet claiming that anyone can stitch random sounds together to create a similar texture. Alas, either no one tried (debatable), or no one could (most probable). And yet with so many followers of FSOL, it is a shame… Until now… Released via the duo’s very own digital distribution channel, FSOLdigital.com, this single track 20-minute exploration by Herd, is nothing more than an amazing (and very welcome) flashback to my favorite world of FSOL. I swear, I think I even hear some similar sounds! But to avoid the undeserving cookie cutter stamp of a copy-cat on Jason Thomson, let’s examine Tangents 41-47 in more detail. Dark ambient passageways layer the cold corridors of this unnerving descent into the underworld, where the curtains sway with ghostly echoes and the doorways open out to other worlds. Then you’re standing on a meadow, where the sound of a banjo slowly creeps into your subconsciousness, and distant abstract shapes slowly float up into focus to assemble broken mirrors and reflect the self. Perhaps words simply fail to describe this psychedelic atmosphere, so why not let the music do the talking? As the title of the EP implies, these seven “tangents” are just the latest in the series. There is also Tangents 1-19 (Future State of Rhythm, 2008), followed by Tangents 32-39 (Entity, 2009), both available as free releases from the netlabels. Really enjoyed this one! 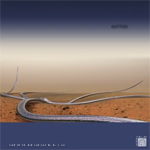 About three years ago, Volker Kahl gave up on the music industry. Recording under his alias Kattoo, and earlier in his collaboration with Gabor Schablitzki as Beefcake, Kahl left his home-base of Hymen Records, and started releasing his music (including past albums) to the public on a donation basis, via his very own jungle.clan.ag, where every cent goes directly to the artist. Of course, giving up on the industry also means giving up some of its perks, like the wide distribution channels of a somewhat large independent label, and the necessary promotion that goes with it. Which is why, when the fourth full length album by Kattoo “hit the streets”, I totally missed it! And I’m a huge fan! In the last decade, I have absorbed every Kattoo album, from Places (2004), to Megrim (2005), to Hang On to A Dream (2006) and now, this mysteriously Morse-style encoded album, which title translates to Reivoottak, which, in turn, spells out backwards “kattoovier”, and just means “Kattoo Four”. The eleven similarly encoded track titles translate into basic elements, reminding me of patch names on a synth: “Tape”, “Church”, “Orchbeat”, “Violin”, etc. Alas, the titles follow the main theme of each individual track. Thankfully, everything that is hidden from plain sight with complicated visual code, is revealed in all of its glory with sound. Here is the Kattoo staple sound that I’ve been waiting for. Dark and brooding passageways, a sinister and ruthless approach to tight production, broken beats and old-skool breaks, deep cinematic soundscapes that take me to the other worlds… Although the album looks like it is within a jewel case on kattoo.de, Kahl assures us that it is no available as a physical CD. And that’s the only downside – I suppose the lossless files will do. This is modern classical meets IDM at its best! Highly recommended for followers of Hecq, Architect, Subheim, Nebula and Lusine Icl. 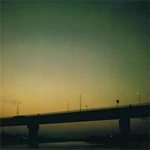 There’s something about electronic music coming out of Japan that is exceptionally… “Japanese”… Don’t you think? From Kashiwa Daisuke to Fjordne and to Ametsub – these favorite musicians continue to work with a potpourri of styles, plucked out of a lottery bowl of influences, that somehow, when all is settled, makes some of the most beautiful music of the world. With its quiet field recordings, and minimal undertones, Twilight dissects the complex structures of life, into individual moments of relaxation and peace. Gentle piano notes, slow breathing brass instruments, and incredibly light jazzy percussion, make up this delicately rendered sophomore solo release by Haruka Nakamura. Inspired by sunset, Twilight is an album recorded in Nakamura’s studio overlooking the ocean, during those hours of the day, when the light changes its presence into music. This moment is captured by Nakamura and is easily recreated wherever his sounds pour out of the speakers – and that’s what a great album is supposed to do. With the help of sublime vocals from April Lee (member of aspidistrafly duo with Ricks Ang), wandering saxophone, docile guitar strums, and the subdued crackling of electronics, Twilight wraps all of the worries of the day, into an hour long meditation on the trials of the past. I definitely recommend that you experience this during long evenings, while observing the world wind itself down through the windows of your pad. In addition to Twilight, make sure to pick up Fjordne‘s similarly influenced The Setting Sun (2009), aspidistrafly‘s I Hold A Wish For You (2008), and the more recent ironomi‘s Sketch (2010), all released on the beautiful, Singapore based, Kitchen. Label.