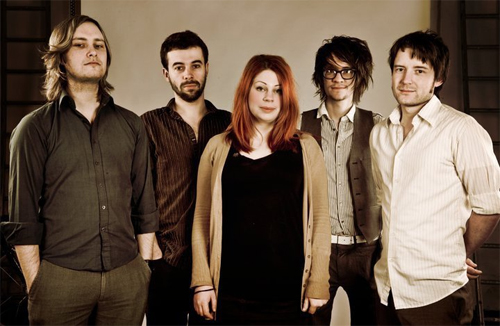 The Quiet Lamb speaks as much to the silence between passages as the music itself. Was this intentional? Its quiet majesty is truly breathtaking.
Thank you! It was intentional, for various reasons. The album was always meant to be enjoyed as a whole, and the silence gives the listener a moment to think and reflect, and space for the songs to settle. From a musical point of view, the silence is a result of dynamics: a lot of bands like taking their music to huge, extreme crescendos – we do too! – but it’s also important to strip all of that back. We never use an instrument, melody or rhythm if it’s not necessary. So sometimes, it follows that we go so quiet, that we come close to – or reach – silence.

Please describe the engineering and production process. I am struck repeatedly by how each note shimmers in its own space, demarcated by pristine washes of intricately woven music. It must be painstaking work.
Tom – Well, it certainly is an interesting question. Things like spatial awareness in a song are very important to me. Just because we have a bunch of instruments, I don’t think we ever feel a need to all play together all of the time. It would destroy any dynamics. The point is to use what we have creatively and to the benefit of the song. We sometimes discuss or advise each other on ideas for how to approach our parts, but generally there’s a kind of unspoken common understanding between us on how to develop a song. When I write a song I often imagine how the others are going to add to it, normally they surpass what I imagined for them. We’ve been playing with each other a long time now and we recognise each others strengths and when they should be brought to the foreground of the music. I hope that kind of answers that question for you.

Who are the band’s primary composers, and can you tell us how song structures are developed?
We all have a hand in composing the songs, but the starting point of the songs is usually Tom (or as on Moss Giant, and some newer songs, Adam). For the songs on The Quiet Lamb, Tom brought these acoustic versions of the songs to us, and we played together – in the same way you might sing along to a song that you like – adding our parts to the structure. We toured the songs and let them grow in a natural way live – the parts we play are the ones that felt natural, after lots of improvisation and gigging. When it came to recording, we were only able to meet up a few times as a full band, since we all live apart, so we had to develop the songs at home. We recorded our parts, and sent them to each other using a program called Dropbox, which allows you to share a folder of files between friends.

What is the origin of the band’s name?
It comes from an event, rather than a person or object, but it’s a personal one, and one that still informs a lot of our music.

Beyond the post-rock tag that gets bandied about, how else would you describe the band’s music?
It’s so difficult! I normally say it’s rock music, and maybe add the fact that it has violin and trombone and a whole range of unusual instruments, or that it’s got its folkier moments.

Would you please share the artists who have most informed your music?
None of us are directly informed by any artists, but we do have people we admire. For me, I am still inspired by seeing Arcade Fire at Manchester Academy in 2005. I was 16, and it changed my life. The power of the performances were incredible, but the best bit was closing on In the Backseat, where the audience (hundreds of people) were completely still and silent, except for Régine’s voice – fragile, delicate, but powerful. Going back to the idea of silence in music, this is probably the best example I’ll ever see. I’m always striving to create a  performance as perfect and emotional as that. Not to copy Régine, or to sound like Arcade Fire, but to create my own, beautiful, moving experience for someone.

The Quiet Lamb is a cinematic masterpiece, and would be the perfect soundtrack for a movie that doesn’t yet exist. Is there any interest in scoring music for film?
There has been talk for a long time about scoring the full-length by Ashley Dean of Broken Pixel (who created our New England video), which would be amazing. There’s also some ideas for other projects – it would be a dream to score music for film.