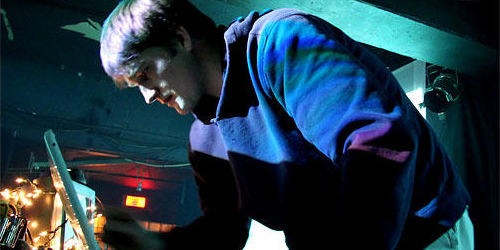 What is the main theme behind the album, and why did you choose to go with a self-titled approach?
There isn’t a main theme behind the album, but to me, it’s an album in the classic sense where all the pieces are related and it’s designed to be listened to all the way through. It’s self-titled because it’s very close to the core or essence of this music that I want to hear. Somewhere between the density of my first release and the minimalism of the last album.

Can you talk a bit about sound design? What software / hardware do you employ in your studio?
Everything is synthesized and sequenced in Max/MSP, bussed out to analog preamps, compressors and EQs, and then back in the computer for a more traditional mixing process with Logic. The album was not mastered for maximum level and because of that it retains a lot of punch, you want to turn it up when it comes on.

Describe your composition process. What are the inspirations? What is the approach at attacking a specific idea?
The harmonic stuff is written on a keyboard and the percussion in Max. Sometimes it’s really hashing out a chord progression over a couple weeks, other times it’s getting up in the middle of the night with something stuck in my head. The inspiration is all over the place from The Meters to Phillip Glass to The Band.

Besides Gin, what is your other choice of poison? 🙂
Whiskey.

Be sure to read Headphone Commute’s review of Cepia.