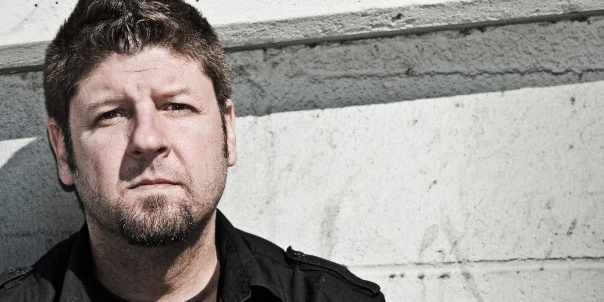 If Epilogue was not the end of Bitcrush, then what was it saying goodbye to?
Maybe I should explain just a bit as Epilogue In Waves was truly intended to be my last album. I simply didn’t think I was going to be able to be a full-time father plus run n5MD and mailorder while also making the music I wanted to. I will not do something if I feel that I won’t have the time to do it properly and I of course thought that my time was better spent being the best father I could be as well as running the business the best I could.

There are also other factors why I thought it to be the last release. I wondered if I had anything more to say as Bitcrush. So I did have second thoughts about it being the last one a few months into it being out. The two reasons being that I did have more to say, I actually have lots more, and also that I thought that my son would never really know me as “me” if I quit making music. Anyone who knows me or has known me on more than a surface level knows that I would not be who I am without creating music. I really do need to make it.

After all that said… there still is a theme within that album. For most of the songs on it and In Distance I used the ocean as the backdrop. It was time to get the protagonist I hide behind “out of the water”…few people know this but the album could actually have 2 endings… the song “to drown” or “to the beach” (the later is available free via the bitcrush website so anyone can choose their favorite ending). I chose to have the protagonist drown. So to get back to your original question… we are saying goodbye to “him”.

So is there another beginning with Of Embers?
I guess it could be seen as that. Yes.

What is the theme within Of Embers, and how personal is this album to you?
All Bitcrush releases have been very personal. This is one of the main differences between say a Dryft album and a Bitcrush one. Yes Dryft is strictly electronic and is emotional but Bitcrush is however i’m feeling at that very moment recorded into the computer. Lyrically Of Embers is about looking inward and finding who you really are. It is also about how you may have grown into a completely different person than you ever would have thought (for better or worse). Some of us never change, but I think I have changed a great deal, and while writing Of Embers I was thinking about that transition a lot.

Tell us a bit about producing tracks that evolve over fourteen minutes…
I never really set out to make songs with such taxing lengths. It really just happens that way. In some cases I do have some of those that are into the 25 minute mark that I edited down to make them a bit more listener friendly. This really comes from writing music in the moment I think. I may write a whole section or what I feel is a whole song and leave it sit. I will then go back to it weeks later and because of the time that has past I may (and always do) feel different emotionally then I did when it was first written. So rather than rework the current song to reflect how I am currently feeling… I add to it. I’ll either use the beginning or end as a jumping off point to take it somewhere else.

Now regarding Dryft. First of all, I’m glad this project is back! You’ve switched gears in the past a few times with this project… What prompted you to revive the alias again?
Glad you’re happy it’s back! I’ve gotten some really nice feedback on the album. I really wanted to revisit a more strict electronic sound. Dryft for me is really fun to do. It was about time to bring the project back and some of the ambient/post-industrial ideas I was previously known for with it.

On Transmission – is that a voice from on of those mysterious Russian numbers station?
Yes. Exactly.

What is behind the name, Ventricle?
It is only one part of the heart.

What are you working on right now?
Writing music really….For the first time I have no set plans as to what will be next in regards to my own music. I am just going to be writing and see what materializes first. When something starts to take shape i’ll then focus on one project, if possible. There is an m.cadoo album called Density that is pretty much finished but I am unsure as to where/how it should be released as it really does not fit in with n5MD stylistically at all. On the business side I am also prepping the 2011 release season for n5MD which is already 5 releases in. I am extremely lucky to have a job that I love doing.

Check out yet another interview with Mike Cadoo, this time profiling his label, in our n5MD Label Profile. Headphone Commute also featured a two part Sound Bytes n5MD Special, where we review the new album by Bitcrush and Dryft. Read them here: [part one] [part two]