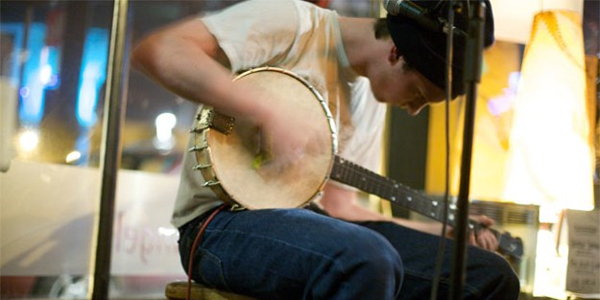 If there was one instrument in the world that Sam Amidon could embody what would it be and why?
a little hummingbird. they are like instruments of humming!

Which old American folk song that you haven’t recreated would you like to see resurrected by a Hip Hop artist? And who would that be?
it has already been done – nas, “new york state of mind.” it is structural re-working of the old folksong “edward”

What are you currently reading?
I just finished Brideshead Revisited by Evelyn Waugh, now I’m reading Wittgenstein on Rules and Private Language by Saul Kripke.

Can you give us a taste of your poetry?
Being friendly is for the animals : Being sweeping is for the friendly people : Being is for you

i am SUCH a fcking good poet. tell samuel amadon that i will beat him in a poetry battle.

Which celebrity death in the last year made you think “O’ Death!”
my grandfather.

Your music predominantly focuses on old American songs, which country would you choose if you could pick from the archives of one other nation?
I have already gone through the archives of every nation in the entire world.

What impact has Iceland had on your music?
the impact of a lot of wonderful people being awesome.