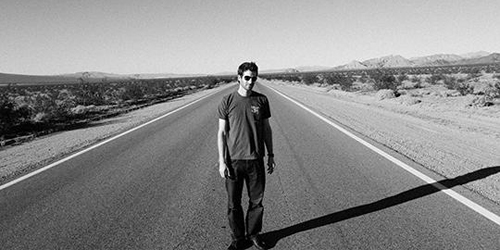 How did you meet Joby Talbot? What were the serendipitous circumstances that yielded this amazing collaboration?

Joby and I met quite randomly. He was a friend of a friend of my neighbor. My neighbor knew I was a composer so she invited me over for dinner one night while he was in town. Somehow we were friends within minutes. We exchanged CD’s and both loved them. We talked about working together pretty early on but mostly we just hung out when he was in town for a meeting on a film or whatever. Then about a year or two later Joby came to me with this idea.

Genus is a serious conceptual work. What was it like working within the set parameters, trying to interpret a central theme of science into music, that will in turn be interpreted by dance?

It was great really. One of the most successful collaborations I’ve been a part of.

I should back up though and give some background on the piece I realize. Genus is about Charles Darwin and evolution. So that was our first (and possibly main) inspiration. Wayne McGreggor, the choreographer, gave us some other clues as well. He knew that he wanted it in three main sections. The first should be primordial and hard, the second a duet with two dancers, and the third a large finale with many dancers. He told us what he wanted with the lighting for reference, when there would be video (at one point all of the dancers leave and it’s just video – an amazing moment), and some emotional cues. And he knew that it was going to be 45 minutes. We started working from there. We made a map of dynamics and instrumentation showing how long each section should be. We divided those 3 sections into 3 more. The 45 minute piece was then in smaller 3-5 minute chunks. I’d never worked that way and it was great. You can refer to the chart whenever you’re lost and know what needs to be done.

We also we wanted to give the composition an evolution of its own. We started with static, then little snippets of sound break out from it. You then realize it’s voice, and after the voice takes over it becomes chords. Then the static comes back in the form of rhythm. Then this whole first section concludes with a large dysfunctional sort of climax where everything falls apart. This is the first entrance of the violin, which later becomes a quartet. The third section sees choir and strings, then eventually electronics, and so on… Joby also found lyrics from one of Charles Darwin’s secret (at the time) notebooks. These are the phrases that the choir sings.

What was it like working on a real score? Tell us about the experience of working with the choir and the quartet?

Recording the choir and quartet were amazing. We recorded in an old church in London and it was during the massive floods they were having in 2007. It was coming down all day, rainy and cold with the wind blowing loudly in the trees. It reminded me of footage from Florida a few hours after a hurricane or something like that. Despite the wind outside and the occasional drips of water from the roof the acoustics in the church were amazing. I remember Joby and I sitting in the pews for one of the takes and just listening and taking it all in. At one point the roof opened up and water began gushing down the walls. Then another interruption came in the form of a deranged man that stormed into the church claiming that the apocalypse was coming. London was being washed away by the wrath of God he said. We insisted that we were recording but he would not leave until he prayed. So we cleared out of there for twenty minutes for him to prey! You can’t make this kind of stuff up.

What about studio work? How did you fold the sampled pieces into the final piece?

We’ll the way we organized the work was that Joby composed “building blocks” of chords and melodies for me to take and manipulate. We knew that the first-third of the piece was going to be mostly electronic so we didn’t want to pre-compose too much. I then took the material back to my studio in LA and began processing it. It was so much fun to process – such rich material. I did lots of spectral and granular stuff. Also a lot of amplitude following, etc. Then after I’d spent about a month working on it Joby came to LA and we finished the piece in my studio.

I’m sure you’ve had dreams of creating a score for a film. But ballet? Did you ever think the name Benjamin Wynn may be one day mentioned in the same sentence with Tchaikovsky (oops, I just did that)?

Ha. No, one can never assume that.

I’d never imagined my music to ballet, no, but then again this is not the kind of ballet you think of when you think of ballet. It’s incredible modern. I was fully sold on the idea when I went to San Francisco to check out a piece of McGreggor’s that the San Francisco Ballet was putting on. My face lit up once it started. There were projections and music by Steve Reich. Once I heard a vocoder come in I knew this was the thing for me. 😉

And I had also done a bit of music for dance before. At CalArts I took a class that was hosted by both the music and dance schools. Morton Subotnick taught the music side, the dean of dance the other. You were paired with a dancer and you had to compose a piece. It came out great. There’s also an LA dance company called Oni Dance that’s used some of my music.

The album really works well as a standalone. Throw us your pitch for checking out the actual ballet!

Well seeing the ballet performed is an entirely different experience from listening to the music. While the music stands on its own, it is just one piece of the actual ballet. And I fully respect and admire all of those other pieces. The lighting designer, the set designer, the video artist, THE DANCERS, they all combine to create an amazing piece of work, in my opinion.

In many ways I’m glad there’s not a video of this floating around on YouTube. You really need to be there to experience it. Video would compromise it too much I think. There’s so much to pick up by being there. Being in the Palais Garnier alone is amazing. So I like the music on it’s own, I’m happy to leave it with that. Then I just get extra happy when I hear about someone getting to see it in person.

What’s next for Deru? You’ve got an album coming out on Mush Records – tell us a bit about that. And do you think we’ll see more conceptual work from you in the future? Maybe film scores?

I’ve got an album out on Mush called “Say Goodbye to Useless” in February. I’m really excited for that. It’s been a long time coming. I also have a single in January called “Peanut Butter & Patience”. It’s very different from Genus of course. It’s pretty heavily beat-driven. In some ways I made it as a response to people telling me that my last record was ambient, which I totally disagreed with. I tried to pair down the songs to their most important elements. And there’s some new stuff in there as well for me. More live instruments. I’m excited.

See my previous interview in 2008 : Two and a Half Questions with Deru