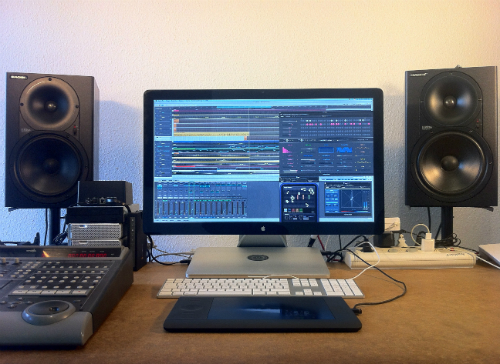 Frank Bretschneider is a Berlin-based electronic musician working with sine waves, white noise, and other primitive signals as source material for his compositions. In 1995, along with Olaf Bender, Bretschneider founded the monumental Rastermusic label, which subsequently merged with Carsten Nicolai‘s offshoot to become what is known today as Raster-Noton. Bretschneider continues to release music, with his most recent album, Super.Trigger out on Raster-Noton in 2013.

Let’s start at the very beginning. Can you tell us how you got involved in composing, and what was your very first piece of gear?
I took my first steps to make music in 1983 and my first instrument was my sister’s acoustic guitar. Since she never used it, I took it and turned it into an electric one by replacing the nylon strings with steel strings and mounting a single coil pick up. My sister was crying and had a breakdown. But actually I wanted to make electronic music and I was fascinated by the idea to use the studio as an instrument: Just to record the sounds and to sculpt the piece itself with the help of studio technology: mixing, EQing, tape manipulations, etc. I had a pretty good tape machine at this time, a german Uher SG 561 Royal with variable speed and three heads. So I used its various features to turn the guitar tracks into kind of electronic sounds: bouncing, cutting and looping, fasten or slowing down the speed, adding echoes and delays. Soon I bought some more gear, a second guitar, an electric harmonium, a small DJ mixing desk, a second tape machine and some microphones. And in 1985 I established a label called klangFarBe to publish my music via compact cassette tapes in a very limited edition.

How many different studio iterations have you gone through, and what does your final setup look like right now?
After that first kind of bedroom studio setup I had some better equipment eventually, my first synth for example, a Korg MS-20. In 1988 I switched to MIDI sequencing with running the C-Lab Supertrack software on a Commodore 64 home computer. My first MIDI synth was a Casio CZ-101 and a Yamaha FB-01 sound module then. And an multi-track recorder later on, the Tascam 238 Syncaset. It had 8 tracks on standard compact cassette tape and I used 7 tracks for recording analog sounds and microphones and one track for the MIDI clock signal, for synchronization with the computer. Finally in 1993 I was able to build up a more professional studio together with Olaf Bender. There we were starting our Rastermusic label in 1996. It served also as our office till I moved to Berlin in 2000. We were switching slowly from analog to digital, using still a lot of analog gear for the sound, but recording was digital to DAT and then transferring it back to HD with Digidesign Audiomedia sound card and Sounddesigner software for editing. By the time when I released my first Album “Saat” and Logic was only used for MIDI sequencing and controls. Since I live in Berlin I have just a small home recording place again, wouldn’t really call it a studio. But since I work mainly alone and for myself, it’s enough. And when it comes to mastering I prefer the help of a professional studio/engineer. 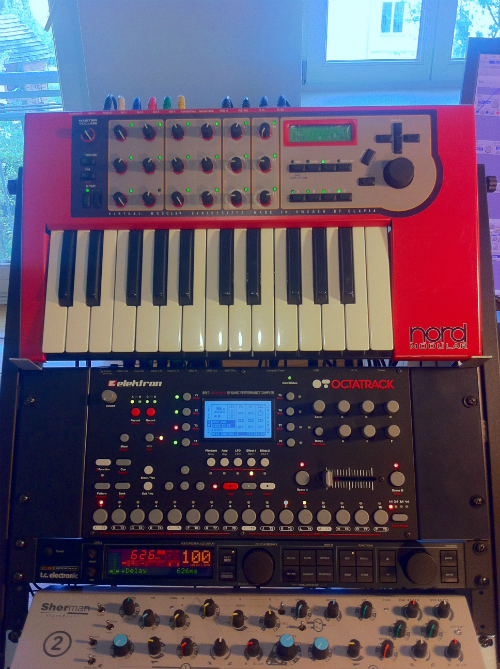 Tell us about your favorite piece of hardware.
It’s still my Clavia Nord Modular which I bought in 1998. It was love at first sight and I never would sell it. I spent days and nights in exploring its functions. I love the endless possibilities to generate any kind of sound because of its modular structure. Some of my earlier releases, “Rand” in 1999 as well as “Rausch” from 2000, were made entirely with the Modular. For the editor software I still have a Mac G4 running OS 9. It includes some nice sequencer features too, but I rather use the Elektron Octatrack step sequencer and arpeggiator, that’s a really nice pair. The Nord’s sound is generated in virtual analog, using DSP processors, so it might not reach the power of a real big analog modular system, but it’s a very versatile piece of gear and I used it heavily again for a new album.

And what about the software that you use for production?
I use Live and Logic. The first for creating ideas and quick sketches and the latter for fine-tuning and arrangements. A few of plug-ins too, namely the Soundhack delay trio for weird delays, the Audio Damage Automaton to mangle sounds and the Korg Wavestation soft synth. I had the real one and used it heavily during the 90s and really like the sound and concept. But unfortunately I had to sell it and was more than happy to find finally the reincarnation in form of a software.

Is there a particular piece of gear that you’re just dying to get your hands on and do you think one day you’ll have it?
A nice Buchla system or similar would be something I’d like to try, but I guess I will never possess one myself. Fortunately I have a residency at EMS studio in Stockholm in July this year, where I’m able to work with a Buchla as well as Serge modular system. So I hope it will help me to finish a piece of a more complex and abstract music I work on already for a while.

What does your live setup look like, and what do you bring with you when you travel for an extensive tour?
I had some trouble with missing or late arriving gear, as well as certain issues with customs and/or border check authorities in the past. So I prefer to travel only with hand luggage and my live setup is pretty minimal. I usually bring the Elektron Octatrack for the sound and a MacBook Pro running Modul8 for the visuals. It’s still pretty versatile: I can run prepared sound as well as playing and arranging live with the step sequencer and audio controls, and at the same time controlling the visuals via the MIDI section of the Octatrack. 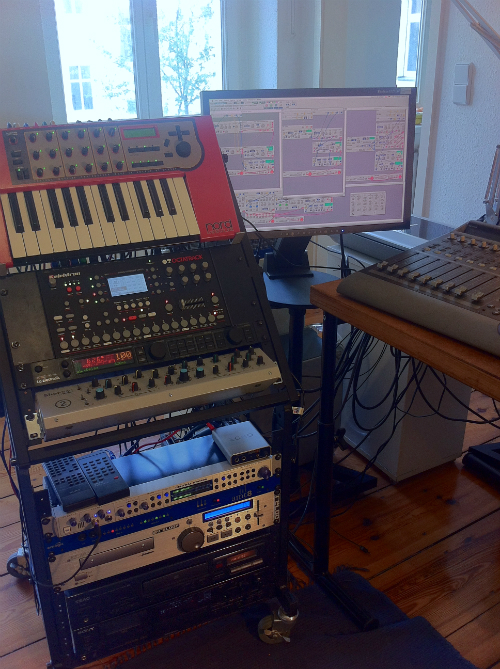 What is the most important environmental aspect of your current workspace and what would be a particular element that you would improve on?
It’s highly functional and there is nothing what I wouldn’t use daily – or at least very often. It’s pretty tidy too, I cannot work in middle of a mess. Everything is connected and ready to use by switching the main switch. Unfortunately it is not really sound-proof at high volume levels, that’s something I have to improve.

What can you tell us about your overall process of composition? How are the ideas born, where do they mature, and when do they finally see the light?
Ideas are born almost everywhere and always, that’s the easiest part. It might be a book/story I read, a movie, a concert, an exhibition I saw. It could arise from a dream, during travel or when I surf the internet. The tricky thing is to convert an idea into music. Quick results are always a bit suspicious for me. So it often takes ages from first sketches to the final piece, and is an occasionally painful process. And sometimes it turns out that the original idea isn’t so sustainable or important anymore. Then I bury the unfinished bits and pieces in my archive, maybe using them for another project one day again. If everything goes well and I’m able to finish enough songs worth to release an album, I will put them together and look for a label to publish.

After the piece is complete, how do you audition the results? What are you reactions to hearing your music in a different context, setting, or a sound system?
Usually I leave a track for a while after it is finished, to get a bit a distance. It sounds so different after a month or so. And then I prefer to play it to friends, at my place or theirs, at different spaces, using various sound systems. I always feel immediately what’s wrong or right with a piece when listening to it in the presence of another person.

Do you ever procrastinate? If so, what do you usually find yourself doing during those times?
There are always moments I’m forced to make a break, it might be a decision of how to proceed further or just being tired from listening. I make me a coffee, something to eat, cleaning up the room or go out for a walk. There are interruptions from phone calls or messages, so sometimes I try to escape by working at night, but this also change the overall mood and the sound significantly. Actually I try to work on music each day and prefer to continue over longer periods, but there is always paperwork and software updates and agreements, requests, daily emails, maintaining website and social media. Concerts and openings, and friends to meet too. So actually I’d need a better time management, but I’m not good with, and sometimes I get a bit lost and it’s hard to focus again afterwards.